Despite the recent media hype, this concept is not new. Alternative Facts have been used throughout history by people in power to maintain control and status.  George Orwell’s dystopian classic 1984 highlighted this technique; a society in which facts are distorted and suppressed, offering an alternative way to view the truth as it has been proclaimed. Say hello to Confirmation Bias, Frequency Illusion and Fake News. 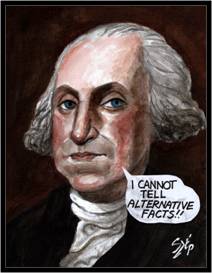 The practice of refusing to admit inaccuracy when facts are clearly in evidence is not just political trickery, it’s a tried-and-true tool for just about all of us. I employed this practice during my adolescent and teen age years. You might say I was an early adopter.

I became quite skilled at finding myself in situations calling for the creation of statements or “alternative facts” that deflected blame and responsibility to other parties. I made sure they were unable to fact-check me (and couldn’t testify against me) and presented my “facts” with great sincerity to the high court of parental authority.  For the record, they were always questioned and rarely accepted.

My mother, having governance over five children and limited patience, referred to these statements by their real name—lies. Deception, fibs, exaggerations, call them what you will; she tolerated none of them. I learned at a very early age that this approach did nothing for my credibility and curtailed my privileges.

The Dog Ate My Homework

A relative of alternative facts; it’s the best-known excuse for being unprepared. It exemplifies the ridiculous, and yet the claim of a dog eating one’s homework is quasi-credible, since dogs are known to chew or eat paper. It is both impossible for a teacher to completely disprove and absolves the student of any blame.

The phrase has grown beyond its schoolroom genesis, becoming a sarcastic comeback to an implausible explanation for a failure.  Now that we’re in the digital age it’s losing its momentum. It might have more cred if students claimed the dog ate their USB stick.

Children will often try this to see if there are any takers. If it works, it’s only good once.  Not to be outdone, American presidents have used it to criticize political opponents, and it has been a source of humor in comic strips and television shows. Syndicated columnist Eugene Kennedy once described Richard Nixon as “working on the greatest American excuse since the dog ate my homework” when the Watergate tapes came to light.

Our opinions are shaped by a lifetime of gathering and storing information that confirms what we have been taught to believe, ignoring information that challenges our preconceived notions.  The older we get, the more ingrained these beliefs are, making them very difficult to displace even when new evidence is staring us in the face. 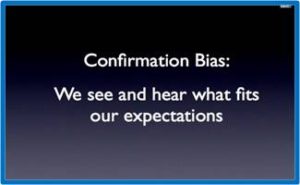 Research places confirmation bias among the most common mental blocks. Journalists who report the news must avoid the tendency to ignore evidence that negates their story in the same way scientists looking to prove a hypothesis must avoid designing experiments that will only produce the desired outcomes.

Humans tend to seek the evidence that supports the truth we already believe.  Our brains are wired this way. We have an idea of the way our world works and we actively search for supporting examples to prove we are right.  An excellent example is the question of whether America really put a man on the moon. If you look for proof we did not; you will find it.

It is equally important for journalists to seek evidence that disconfirms what we believe because it broadens our perspective.  All of us, especially the media, have an obligation to seek the truth.

Similar to confirmation bias, another common discriminatory tool is called Frequency Illusion. Once you’ve noticed a trend, you believe it occurs with regular frequency.  Estimates of frequency are skewed when you begin noticing each occurrence until you perceive them happening all the time. Eventually you link what you see with what you believe until they are one and the same.

Alternative Facts have been all over the news recently; saturating the media, the Internet and our lives. It’s time to create an Alternative Facts-Free Zone in our thinking and reading world. 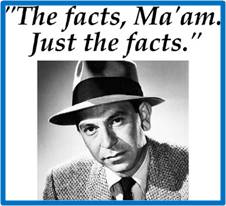 Be critical of the news you follow and do not believe the loudest voice on your social media feed is the most truthful (even if it bears the seal of the president). There are many unbiased, impartial news sources available and it’s important to know them and read them.  Even with sites like Snopes and Smoking Gun, it takes effort to reach the facts and therefore the truth.

The responsibility rests with us. Question mainstream multi-media; seek honest news sources.  We have technology, photography, math, and science to help us.  We also have two very powerful tools called compassion and common sense to help us navigate misinformation.

The overwhelming amount of fake news, especially since the election, highlights the fact that technology has reached the limit of what it can meaningfully report within the news industry. Reader’s beliefs in what they see correctly and incorrectly has reached an all-time low.

The media as a whole is challenged to fix its credibility. Reporters and editors must find the courage to report accurately and fairly. Readers must go beyond headlines and think before they comment or forward.