Growing up, I thought that the French Canadian diet had three major food groups: onions, pork and bread. At one dinner we counted three different ways that our mother used onions and bread was always on the table. Based on last week’s mini–vacation in Montreal, I’m happy to report that things have changed—except for the bread. 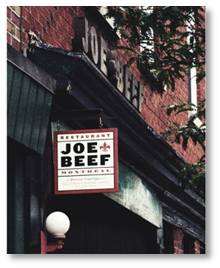 Bread is everywhere. There are, of course, the famous Montreal bagels but bread was included at every meal. At one simple lunch, we had four different kinds of bread on the table: breadsticks with our squash soup, pita with my Greek salad, ciabatta with Seth’s sandwich, and a basket of pain beurre (sliced baguette with butter) in case we needed more carbs.

We ate at a variety of restaurants, from the fast and cheap to the slow and expensive over three days and found the food to be, for the most part, excellent. Eating well in Montreal is easy. Here are two of the highlights:

This small, eclectic restaurant in Montreal’s Little Burgundy neighborhood offers a menu unparalleled for its variety and creativity. Joe Beef is a great place for the adventurous eater but not recommended for the meat-and-potatoes diner. The day’s offerings of food and wine are written on a large blackboard mounted on the wall. Given the restaurant’s name, I was expecting to see a lot of steak and ribs but I was mis-steak-en. The restaurant is actually named for “Joe Beef” McKiernan, a working-class hero. There were only two beef offerings on the menu and the rest of the dishes were, well, different. 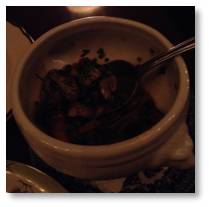 We passed on the tournedos de cheval (filet of horse), the pieds de mouton (sheep’s feet) and the boudin noir (pig’s blood sausage). We did take a leap of faith in ordering the percebes (gooseneck barnacles) as an appetizer. I’m more familiar with barnacles as a marine nuisance that get scraped from a ship’s hull than as a delicacy. This variety is harvested from deep water by divers, however. Served in a small tureen and bathed in an amazing sauce, they were delicious.

We followed that with flounder cooked in lobster sauce for me and tagliatelle with steamers, littlenecks and razor clams for Seth. Both were excellent. The young couple next to us was more adventurous. They ordered a wide variety of appetizers and then dessert. Given that the appetizers are enormous, the volume of food that appeared on their table—and disappeared as quickly—astonished us. I offered Charlie a piece of bread dipped in the barnacle sauce and he reciprocated with a slice of boudin noir. 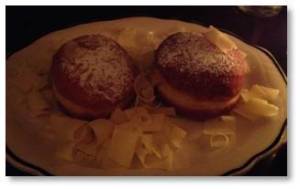 Here I must admit that boudin noir was one of the two dishes our mother allowed us kids not to eat when she made it for dinner. None of us participated. I thought that it might be an acquired taste, something that I would appreciate now that my range of foods has broadened. But no. Despite my age, this sausage is still a taste I have not acquired.

His wife ordered the prune ice cream for dessert but we had the apple krapfen, two doughnuts stuffed with apple puree and dusted with confectioner’s sugar with thin curls of rich creamy cheese alongside. The meal at Joe Beef was both delicious and memorable. (And do use the rest room for a real surprise.) Hint: He doesn’t bite. 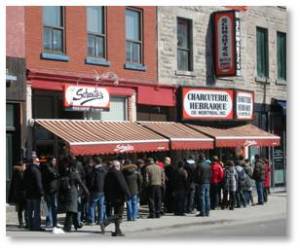 The line outside Schwartz’s Deli

Schwartz’s deli in the heart of Montreal’s Jewish section on Boulevard St. Laurent has been around for more than 80 years and almost always has a line stretching along the trottoir (sidewalk) outside. And for good reason. Schwartz’s basically serves one thing—smoked meat sandwiches. Yes, you can order other things but, really, why would you want to?

People come to Schwartz’s Deli for the sandwiches. The meat is homemade, beef brisket smoked by the family for the restaurant, and it tastes like a combination of corned beef and pastrami.  You order it either lean, fatty, or medium and it comes on rye bread. I asked for hot mustard but they don’t carry it because it obscures the taste of the meat. 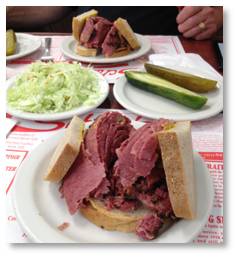 Seth and I are very familiar with New York delis so we were a bit surprised at how small and worn the place was. We were also taken aback by having to buy pickles instead of having them appear on the table, and not being able to order potato salad (coleslaw and frites only). But when the food came, all that became irrelevant.

The meat was fantastic and, because it was homemade, we didn’t have to worry about commercial additives like sodium nitrate and sodium nitrite.  Schwartz’s sells this smoked meat in such volume that it’s always fresh. Already, I’d like another sandwich.

There are many more wonderful restaurants in Montreal that we didn’t have time to sample. But if you’re going to the city, you can put these two on your agenda and be confident of a terrific meal.