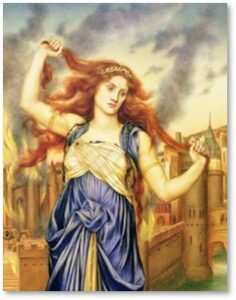 My parents should have named me Cassandra. I’m an Aquarius who enjoys looking into the future. More than once I have predicted events that later came to pass—but nobody listened to me.

In January of 2014, I wrote about the Polar Vortex and The Colder Side of Global Warming. This post dealt with the potential—and then largely unrecognized— effects of the Arctic Sea melting due to global warming.

I had attended a lecture by former NASA meteorologist Tom Wysmuller, who looked beyond polar bears and shrinking glaciers to discuss what an open Arctic Sea would mean to weather patterns and ocean currents worldwide.

His analysis went far beyond what most scientists were focusing on at the time. In fact, it seemed so far out there that it was likely no one would pay much attention to his warning. In other words, he was my kind of guy!

Well, guess what? It’s starting. Gizmodo tells us that a “Major Ocean Current May be Hurtling Toward Collapse.”

“A new study finds that a crucial ocean system may reach its ‘tipping point’ sooner than predicted if the rate of climate change continues at a breakneck pace.” The study dealt specifically with the Atlantic Meridional Overturning Circulation, known as the AMOC, which helps push warmer water to the North Atlantic. Cold water sinks and flows south, keeping the circulation going.

While the AMOC transports water across the planet’s oceans, including the Atlantic, Pacific and Indian, the North Atlantic is the region contributing to the slowdown. According to Johannes Lohmann, one of the authors of the study:

“The AMOC is at risk of collapsing when a certain level of freshwater flow into the North Atlantic from increasing ice melt in Greenland is reached. These tipping points have been shown previously in climate models, where meltwater is very slowly introduced into the ocean. In reality, increases in meltwater from Greenland are accelerating and cannot be considered slow.”

If the AMOC Runs Amok

If global warming causes the AMOC to run amok, it will have a major impact on the world’s weather patterns and temperatures, particularly in Europe, as well as environments for fish and marine mammals. 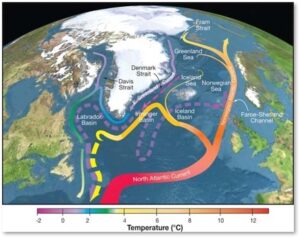 At the start, I wrote a whole post that attempted to explain how this works but it’s very complicated and I’m not an oceanographer. The following articles will educate you in detail about how the AMOC operates and how it affects all sorts of things.

Don’t be surprised if the authors contradict one another, or even if they sometimes contradict themselves.

All the articles reference the study, which was published March 1 in the Proceedings of the Natural Academy of Sciences. For my money, the New York Times does the best job of explaining the whole problem in layman’s terms. It has really cool graphics, too.

What they all agree on is that big things are happening with the AMOC and those things are likely to have a huge impact on the world’s weather patterns, fishing industries, rainfall distribution, agriculture, hurricane development and sea-level rise.

The scientists offer two scenarios, one in which the AMOC slows and another in which the circulation stops altogether. They claim the latter is “less likely” to happen. Unfortunately, the scientists have already underestimated how fast global warming is proceeding, how fast the Greenland ice sheets are melting, and how fast sea levels are rising across the Eastern seaboard, so I’m not taking this prediction to the bank.

What scientists are beginning to realize is it’s all happening much faster than they had predicted. And it’s driving us toward  an oceanographic tipping point after which huge impacts will occur. 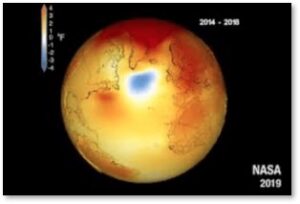 What we don’t know is which of the two scenarios will happen—or whether slowdown will lead to complete stoppage. And then there’s the Cold Blob to consider.

That patch of cold water in the North Atlantic may have caused Europe’s heat wave in 2019 in a demonstration of just how directly ocean temperatures affect global weather patterns. We were in France at the time and it was hot — really hot — in a country without much air conditioning.

Changing Too Fast for Comfort

Scientists collect and analyze data, create models and watch what happens, formulate hypotheses, test the hypotheses, write articles for peer review, and then do it all over again. They don’t really feel comfortable with tipping points and fast-moving developments because fast is unpredictable, fast is volatile, and fast is scary. That’s why the scientists use euphemisms like “cannot be considered slow,” instead of “really wicked fast.”

Unfortunately, the AMOC doesn’t care what scientists like. This leaves us with unpredictable reality. 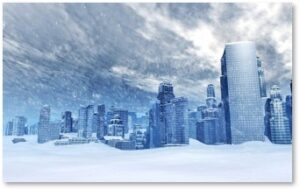 The unpredictable reality is that we just don’t know because this is uncharted territory. The experts are throwing likely ramifications up against the wall to see what sticks.

The earth has had both colder and warmer periods in its geological history and it seems like one sometimes cycles into the other. Remember, the last Ice Age  peaked only 22,000 years ago—a blink of the eye in geological terms. The Little Ice Age was even more recent — from about 1300 to around 1870. Global warming could kick off a round of global cooling.

The AMOC and Rising Sea Levels

Either way, though, sea levels will continue to rise along the East Coast, a change that is already visible and accelerating. Big storms from nor’easters to hurricanes will exacerbate the damage inflicted on our cities, coastlines, beaches, estuaries and islands.

Mr. Wysmuller’s solution was to build a floating barrier to keep frigid Arctic Sea water from entering the North Atlantic. We in the audience all knew that wasn’t going to happen but I sympathized with him. I can recognize another Cassandra when I see one.