In this week’s series on creativity in marketing and advertising, I talked about the strengths and weaknesses of both MBA-trained Suits and nerd-type Engineers in running high tech companies and marketing departments.  In my experience they each bring pre-conceived ideas, approaches, and personality traits to marketing that either destroy creativity or make innovation really difficult.

In talking about the Suits, I mentioned their distrust of any concept that is truly new and innovative, and how they fell back instead on what’s safe and familiar. Because they lacked the courage to make that big leap, does it mean the Chief Marketing Officers or Vice Presidents were cowards? 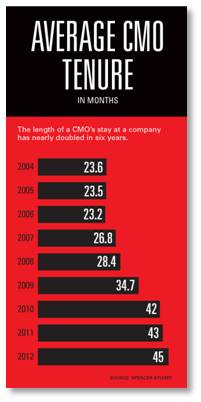 Not at all. Every one of them wanted to do what was best for the company but they were realists and pragmatists. They knew supporting a campaign so innovative it made the other executives, particularly the CEO, uncomfortable was a very risky thing for them personally. While it may have been good for the company in the long run, the benefits might not have shown up right away. High tech culture does not reward spectacular failures, Even if, over time, the campaign succeeds, that success may occur too late for the Marketing VP who approved it. The average tenure of a high tech marketing CMO or VP used to be about the same as the manager of a cellar-dwelling Major League baseball team. Advertising Age says It’s gotten better but that’s still pretty sobering.

So who would put his job on the line if he doesn’t have to? Who would risk getting shown the door, even if he has a golden parachute in his contract, just to benefit a company that won’t tolerate innovation and takes punitive action in the event of failure?  It’s not the VP who’s at fault here, it’s the corporate culture—which is usually set by the CEO and sometimes by the Board.

Management pays lip service to the fact that we learn from our mistakes but that usually doesn’t go much beyond motivational talks and HR slogans. I often think that American business succeeds in spite of its management, rather than because of it. The Board of Directors wants results and a public company has to report those results to the SEC quarterly. Private companies answer to the venture capitalist and equity partners who funded them.  A big, expensive campaign that doesn’t have the full support of the entire management team is a ticking time bomb for the Marketing VP.  Will everything work out all right or will it blow up in his face?  Why risk it?  Why indeed?  We’ll never know if this program or that campaign might have created enormous market visibility, generated leads, created great sales opportunities and pumped up the bottom line because it simply won’t happen.

The Most Interesting Campaign in the World

If neither MBA Suits nor nerd Engineers make good Marketing VPs for high tech products, who would do a better job?  Well, a brand manager out of the consumer products industry is one option. He or she would have the confidence, conviction, creativity and drive to make it happen.

Consumer products companies have, in general, a better handle on the process. They run marketing by product brands instead of product lines and they accept advertising as a given. Even so, breaking new ground is always a risk. When Jeff Manning gave Goodby Silverstein and Partners the go-ahead for the Got Milk? campaign, he must have thought long and hard about it. But that message ran for 20 years, increased milk consumption and  “changed the face of consumer marketing.” It also became a “snowclone,” parodied and replicated everywhere from TV shows to tee shirts. 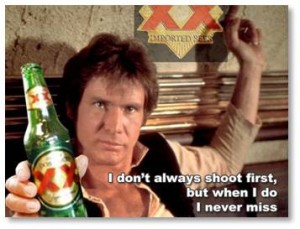 The most recent example of this phenomenon is The Most Interesting Man in the World campaign for Dos Equis beer. Snowclone examples of “I don’t always [do this] but when I do, [this happens] pop up everywhere, especially as a meme on social media, either with or without Jonathan Goldsmith’s image. It was produced by Euro RSCG for Cuauhtémoc Moctezuma Brewery and people love it.

Both of these consumer campaigns have two distinct qualities: (1) they’re very creative, looking and sounding like no other advertising, and (2) they use humor in a sophisticated way that brings us into the joke and makes us like them. Brilliant.

Yet I feel sorry for any high-tech Marketing VP or CMO who dares to suggest that humor be used in anything, much less advertising. High tech is a humorless world in which product marketing teams and executives alike take their products very seriously indeed. I would never have moved a funny ad campaign forward because I knew what the reaction would be. There’s courage and there’s stupidity.

Unfortunately, he or she would also lack any credibility because he wouldn’t understand how the product works or the environment in which it works. You can’t go from “Choosy mothers choose Jif” to the world of big data, network security, cloud computing, CAD/CAM, or telecommunications very easily. A consumer brand manager would probably be lost in the first team meeting she had, given that it would be loaded with initialisms and acronyms, tech jargon, mutually understood history, and obscure nerd names. The learning curve is just too long and steep.

Part of the unsuitable logo

So there you have it: a conservative culture trumps creativity, fear of repercussion bludgeons innovation, and product beats brand.  That does not augur well for change but hope springs eternal and anything can happen.

The nerds of @HBO’s #SiliconValley turned to a street “tagger” to develop the logo for their company, Pied Piper. The result was spectacularly unsuitable but what a great idea. The guys were thinking way outside the box and they took a big risk despite their number cruncher warning them about the cost. It failed but no one got fired and no one died because of it. That’s a welcome message for the future.