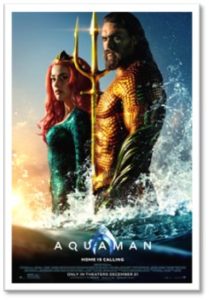 Following on my earlier lament about holiday movies that don’t live up to expectations, I give you Aquaman. I understand that it’s a superhero movie, a genre with its own format, and anyone who hopes for something different is doomed to disappointment.

I know that it is designed for the fan-boy audience that values mindless action over a good script and a real story. I get it. Resistance is futile. But still, I persist.

We saw the trailer, or preview of coming attractions. This can be a problem. Does the trailer show too much and spoil the movie or show too little and not attract its primary audience? The trailer for Aquaman was visually impressive. Early reviews also raised my hopes. Rotten Tomatoes came in at 63% Fresh and 86% Liked. That offered a substantial, if not overwhelming, endorsement. Could the movie live up to it?

Finally, there’s the cast. We have liked Jason Momoa since he appeared as the fugitive Ronon in Stargate Atlantis, years before his breakout role as Khal Drogo in Game of Thrones.

Ready for an Aquaman Surprise

So off we went, ready to be surprised, entertained, and maybe even wowed. I would really like to tell you that Aquaman met all our expectations and then some but I would be lying. Aquaman doesn’t take itself as seriously as the Fan Boy audience probably does and that’s a good thing. Mr. Momoa does a good job of handling his self-deprecating character with as much snarky humor as he can milk from a mediocre script. He also refuses to be awed by the underwater kingdoms to which he is introduced or the royal half-brother, Orm, who takes himself very seriously indeed.

The cast does the best they can with a sub-par script that consists of them mainly talking—or shouting—lines at one another in between improbable action sequences that seem to go on forever. The actors try to create real drama when forced to recite lines like, “Your mother always knew you were special.” Or, “My father was a lighthouse keeper. My mother was a queen. But life has a way of bringing people together. They made me what I am.” But they’re working against the tide.

Still, it takes more than just the bad dialogue, the totally unbelievable fight scenes in which characters are flung around like rag dolls, or the stale, predictable plot to drag Aquaman down.

The special effects, set designs and production values impress, as they are intended to do. They meet the challenge of making people appear to be underwater when they are not. Hair, long or short, floats around the actors’ heads, they swim instead of walking, and clothes flutter in the current. CGI fish, marine mammals and other assorted sea life appear convincingly real, and the underwater kingdoms look beautifully immersed.

Bad Science in the Depths

Astrophysicist Neil DeGrasse Tyson doesn’t rate the science in superhero movies because he acknowledges that they are just silly. But I can’t help noticing Aquaman’s really egregious science mistakes. In one scene, there are waterfalls. Underwater. Really? How does that work? And then there’s Mr. Momoa’s Arthur Curry swimming fast in combat boots and Atlantean soldiers wearing armor plate. Even made out of chitin, it would weigh them down.

Aquaman’s ocean appears amazingly clean and unpolluted given what we now know about the Great Pacific Garbage Patch and the ubiquity of plastic trash. In one scene, a plastic six-pack ring floats past, but this water is otherwise as pristine as one would expect to find in a tank or a computer — but not in our oceans any longer.

A species of marine humans would likely have adapted better to ocean living over thousands of years than these humans have. Undersea conditions include cold, great pressure, lack of breathable oxygen and strong currents. The Atlanteans lack the insulating layers of blubber that keep other marine mammals warm and haven’t evolved simple mechanisms like webbed fingers that would help them swim. (They don’t need webbed toes because they wear boots.) They also don’t have more complex systems such as squid-like jet propulsion to account for their ability to surge through the water at incredible speeds.

But what set me back the most were scenes that supposedly take place in the ocean over a large magma pool. Somehow, the water above this lake of molten rock doesn’t appear any murkier or warmer than the open ocean. Humans, fish and whales swim there quite comfortably.

You would think that the recent eruption of Mount Kilauea on the Big Island of Hawaii would have given the set designers a real-life look at what actually happens when hot magma meets cold ocean. It’s extremely hot and messy and very dangerous. That’s why we have no pictures from the ocean side of the eruption.

Ripping Off Other Movies

Next, we have scenes so “reminiscent” of other movies that I couldn’t help thinking about them while I watched this one. A partial list includes:

And those are just the ones that came readily to mind because I saw the films. If we were as good at recycling plastic waste as Aquaman’s writers were at reworking other films, our oceans would be as clean the ones on screen. Whenever I start adding up the scenes that look like they were ripped from another movie, I know I am not engrossed in what passes for a plot.

None of my picky observations throws cold water on the fact that Aquaman is making oceans of money: In its first weekend, it grossed over half a billion dollars worldwide, $67.7 million in the US alone. That’s an incredible tsunami of money, with even more to come. Nor does it change the movie’s positive scores on Rotten Tomatoes. 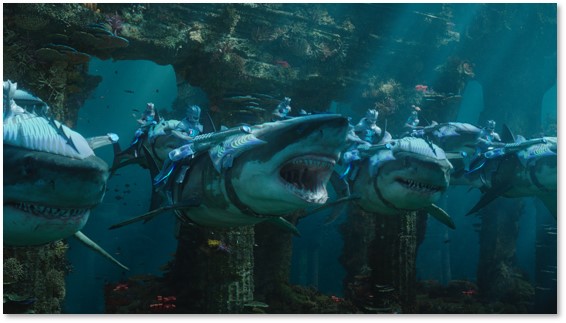 After watching Aquaman, you may leave the theater with pruney fingers and a profound sense of Deja vu, but I have no doubt that Aquaman will be among the Oscar contenders for special effects, sound, and set design. It will probably win at least one, if not all, of those categories. But be warned. You will see a cookie-cutter “origin story” designed to introduce the character of Aquaman so he can be credibly included in future Justice League movies.

With this obligatory piece of housework out of the way, perhaps they can pay some attention to making a movie that actually tells a story instead of just recycling old ones. I’m not holding my breath.