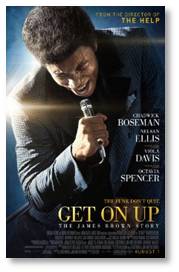 Biopics about singers and singing groups seem to be a current trend. First we had Jersey Boys about Frankie Valli and the Four Seasons: four young men who went from jail and juvie to great fame and fortune on the strength of an original rock sound. Get On Up opened last week about how the late James Brown rose from destitution and abandonment to become one of the most creative, innovative and influential singers in American history.

I will say up front that the music of the Four Seasons was a much bigger part of my life than that of James Brown. That’s partly because of where I grew up: we didn’t hear much James Brown on the radio and I can only imagine what my parents would have said had they heard his songs, much less seen him performing. But it’s also because I like music that I can sing along to; music that has, you know, melody and lyrics as well as rhythm and a pounding beat. It was easy to sing along to the Four Seasons, especially as I have a soprano voice that could handle the high notes. Singing along to James Brown is difficult.  \One of the record producers he auditions with complains that just saying, “Please, please, please” over and over doesn’t constitute lyrics. My point exactly. 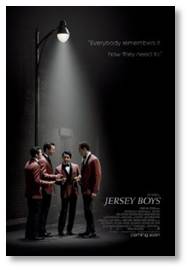 We saw both movies and a few things stood out:

Jersey Boys has, to date, brought in $46,222,854 on a production budget of $40 million, so it’s profitable but not a run-away success.  In its first week Get On Up has earned $13,585,915 on a reported production budget of $170 million. It’s early days yet but the movie has a long way to go if it’s going to get even close to profitability.

If you like rock and roll, soul music, movies with loud, brassy energy and whole lotta sound, definitely go to see Get On Up.