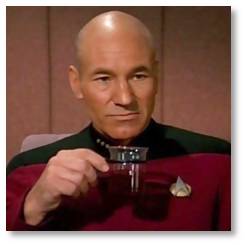 This morning I was engaged in a Facebook conversation with my friend, Mike Combs, in which we traded YouTube clips of Star Trek captains drinking their favorite beverage. For Captain Picard of The Next Generation it was, of course, “Tea. Earl Grey. Hot.”  For Captain Janeway of Voyager it was “Coffee. Black.”  And for Chief Engineer Scott, the beverage of choice was his beloved single-malt Scotch, which did the trick in the famous Sorian brandy scene. I wanted to add a scene from the old TV show Alien Nation in which the aliens get drunk on sour milk but couldn’t find one.

These days, most of the characters on TV, whether network or cable, follow Scotty’s lead and slug back whisky at any time of the day, whether to prepare for a crisis, to recover from something stressful, to bond with one another, or simply to cope with the exigencies of life. My husband and I have noted the amount of casual drinking on TV with a degree of awe as neither of us likes hard liquor. We can’t imagine consuming the amount of whisky, Scotch or otherwise—as well as tequila, vodka, and martinis—that go down the hatch of characters on any given program.

To be clear, I’m not a teetotaler or a follower of Carrie Nation. I like wine and beer and some cocktails. But my taste buds sometimes veer in strange directions. Blue-veined cheeses taste like Ivory Soap to me, for example. I have tried fine single-malt Scotch only to discover that it tastes like Magic Marker in a glass. The one time I was offered tequila, I couldn’t make myself put anything that smelled so vile in my mouth. This quirk makes it as easy for me to avoid hard liquor as it is to decline bleu cheese on my salad. That, fortunately, saves me a lot of money, not to mention empty calories. 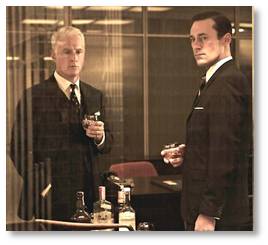 Roger Sterling and Don Draper drinking in the office

Thus I watch with astonishment the many TV shows in which characters not only drink continuously but with aplomb. Granted, the actors are consuming cold tea and not the real thing, but the image is out there that real people drink hard liquor to get through the day. And they don’t even grimace when they slug it back!

I don’t have to name the shows—just watch anything and you’ll see it. It doesn’t matter whether the show is a drama, a comedy, a mystery, science fiction, a spy show, or one that involves cops, lawyers or doctors—the drinking dynamic is the same. (Sitcoms may be different—I don’t really watch those.) The amount of drinking that went on both in and out of the office on Mad Men was legendary.

But why? Is it indirect product placement?  You’re familiar with that process in regard to regular food and beverage items. You see the Coke can placed prominently, the bag of chips resting casually with the Doritos label just happening to face the camera, the pizza box lifted to show the Pizza Hut logo, the character who demands to know who ate the last Hot Pockets, the beer or soda bottle on the table, or the character who walks around with a Dunkin Donuts cup in his hand.

Believe it or not, there’s actually an award for this indirect form of advertising:
the Brandcameo Product Placement Awards.

Companies pay big bucks to place their products in movies and TV shows. For that money, they get to make sure that the label shows, the logo is prominent, the character is eating or drinking their products, or someone is talking about them in a positive way.

Hard liquor is a different story, however. For the most part, we don’t see the liquor bottles, label outward, in a drinking scene—or at least it’s not as obvious. Is that because the companies haven’t paid to place their products on the show but the scriptwriters still want the characters to drink? Or is it the same subliminal message the tobacco companies tried to use a few years ago?  They just showed characters smoking to promote that as an acceptable activity. Does this dynamic reflect an assumption that real people drink all the time for good reasons, bad reasons or for no reason at all? Or is it that liquor companies want us to think that’s the case?

Regardless, it worries me. I don’t have to ask what kind of message casual drinking gives because it’s obviously a bad message on a number of fronts. It says that drinking hard liquor is:

Maybe we need to add a consumer advice warning to the viewers advisory system that appear at the beginning of a TV program.  Here’s what we see now: 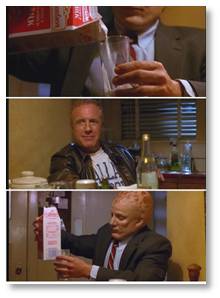 A fine vintage of sour milk

But I can’t help thinking it would be nice to go back to the days of Earl Grey tea and black coffee as beverages of choice. I’ll pass on the sour milk, though.