Last week I went to my high school reunion. Before you think rubber chicken dinner and hotel function room let me explain. I did not attend an ordinary high school, and I have extraordinary classmates. I went to an international high school in Belgium, at Supreme Headquarters Allied Powers Europe (SHAPE), the central command of NATO’s military forces. But a little bit of (condensed) history is in order before we get to that part of the story.

In 1951, in response to the Cold War and concerns over the strength of Europe’s ability to defend a Soviet attack, the Supreme Headquarters Allied Powers Europe (SHAPE) was established in Rocquencourt, France. It was agreed that a Supreme Commander, Allied Powers Europe (the SACEUR) supported by an international staff would be appointed and President Truman named U.S. Army General Dwight D. Eisenhower to this role.

Everything was going well until French President Charles de Gaulle stated his intent to radically alter France’s participation in this Alliance. In 1966, they withdrew from the integrated military command structure and requested that NATO/SHAPE leave France by April of 1967.

The Belgian government offered Camp Casteau, a Belgian Army summer training camp near Mons, and in “serious need of additional economic investment” as the new SHAPE headquarters. It had to be located at least 50 kilometers from the new NATO headquarters in Brussels because SHAPE was a major wartime military target. The new location would have a US contingent assigned to it. Here is where our story begins.

My parents and those of my classmates served in all branches of the armed services as well as the civil service. When the decision was made to relocate the NATO/SHAPE headquarters, US support staff were assigned or reassigned to this new duty station. My father had just returned from a hardship tour in Korea and was awaiting a stateside assignment when he was redirected to Belgium. 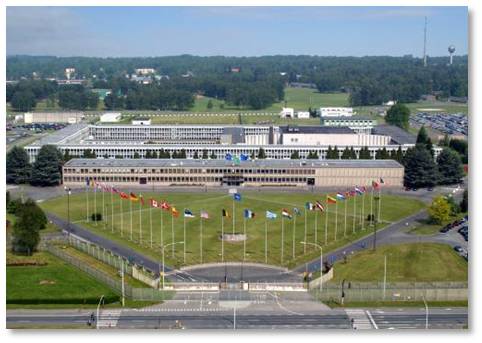 Casteau was little more than swamp land. Before anyone could move there everything had to be filled in and built up. The initial effort included hastily assembled pre-fab structures along with a school, hospital and community support buildings. Housing was a lower priority than command posts. I arrived along with other American families to be housed in temporary living quarters that were pretty bleak. Months passed before we were able to move into a home. It was the end of my known social life, trend setting fashion statements, and friends I could call on the phone every day. Most families did not have phones for at least six months after moving into housing. To a teenager, it was the outpost of the civilized world. To our dads, it was just another day at the office. Except the office had 12 member nations and we were a group of American students brought together (and stuck there) by a new duty assignment in a foreign country.

The only thing we had in common was our American nationality. Our ties to the United States were an American PX that was 35 miles away and the Sears catalog. We attended an international school with an American section to ensure we met the requirements for graduation and college acceptance. Without realizing it or questioning it, we became each other’s anchors and support system. This is the bond that keeps us tightly connected some 40 years later. Of course we have forged other relationships, but these were deeply rooted in the isolation and challenge of living in this new multinational community.

These are the people who know me the best. We have grown up together, grown older together, and become wiser together. We have lived in more places, celebrated more joys, shared more challenges and felt more heartaches than the average high school friendship would imagine. We know each other’s secrets and keep them as if they were our own. We became family by circumstance and happenstance rather than birth. With a few exceptions, we do not live near each other and probably never will.

Graduation, college, marriages and careers scattered us across the world. In the beginning, staying in touch took time and effort. We wrote a lot of letters and once in a while were lucky enough to see each other. Then came email followed by the advent of social media. Now we are connected on a more personal level and communicate weekly if not daily. For the last 12 years we have met every other year in Myrtle Beach over Columbus Day weekend. We rent beach houses, reconnect and spend three amazing days together. We do not worry about weight gain, gray hair, any hair, or job titles. We are old friends and good friends who unconditionally accept each other and treasure the ties that bind us. We grew into the adults we are today because of them.

When we are together, conversations pick up where they left off. We hold hands and hug each other. Technology makes picture sharing easy. We catch up on each other’s lives through photos and videos. Some of us are grandparents now and a few of us have retired. Children and grandchildren are celebrated, losses are mourned, and accomplishments shared. We laugh the laughter that comes from shared memories, those one-of-a-kind experiences that shaped and defined us.

“The ties that bind us are sometimes impossible to explain. They connect us, even after it seems like the ties should be broken. Some bonds defy distance, and time, and logic.

Because some ties are simply meant to be.”

AK NOTE: For readers who enjoy Susanne’s posts, you can now find all of them using the Guest Authors category on the right.  You can also read her bio, which is on the menu at the top of the page.