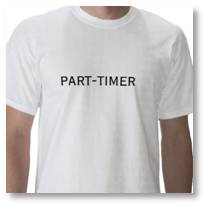 When it comes to hiring and the economy, there’s good news and some, well, other news. From The Wall Street Journal’s article “Mid-Market Executives Move to Expand in Improving U.S. Economy” we learn the results of a Deloitte survey of over 500 mid-market executives from companies with annual revenues between $50 million and $1 billion.

This leads us to the next topic: which part-time jobs are the best? Which have the highest median hourly wage and the best outlook for being hired?The answers come to us from the latest CareerCast.com report on the Best Part-Time Jobs for 2015, which uses wage information and hiring outlook culled from Bureau of Labor Statistics figures.

The report includes traditional part-time jobs, seasonal jobs, freelance work, and consulting employment. These categories can mix and mingle, though, as “ . . .accountants are in high demand every spring before tax time, and delivery truck drivers have no problem finding work around the holidays. The suppliers sending out a surplus of products at the holidays also need material movers, so job seekers looking for extra money at that time of year often can find work in warehouses.” Makes sense.

Here are the part-time jobs with the highest media wage: 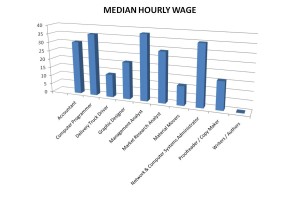 And here are the jobs with the best hiring outlook: 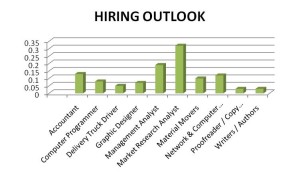 Cream of the Crop

The trick of course is to identify the best jobs in both categories. The top five are . . .

The news for folks in my line of work, writing and editing, isn’t so good. But at least these jobs made the list. It’s difficult to offshore communications jobs unless you want the results to sound awkward because the writer doesn’t understand the American idiom or contemporary word usage. And if the hiring outlook isn’t so good, well, that means a lot of companies still don’t see the value in hiring a full-time writer. That’s no surprise.

So there we have it. You may not like the results or you may stand up and cheer but they are what we have to work with and the numbers are better than they have been for a long time. Let’s feel good about that and cheer on the economy so the numbers will improve even more over the next few years.