Before leaving for vacation several months ago, I wanted to make sure I could see clearly, so I stopped in at the optical shop at my healthcare provider’s brick-and-mortar store to get my frames repaired.

“Wardrobe malfunction,” I said as I showed the optician the broken spring in one earpiece of the frames. She, a charming, sophisticated Eurasian wearing stylish frames herself, examined the damage. After determining that I purchased the frames less than one year ago and that I had bought them there, she took them into the back room. After a moment, she emerged to inquire if my name matched the one in her computer records.

“These springs cost about $10. I’ll have to order them because we don’t keep these designer parts in stock. Will that be . . .” 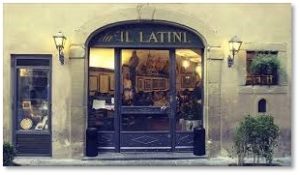 She paused mid-sentence and looked closely at my shirt, a long-sleeved, light gray, collared pullover with a logo printed over the left breast pocket.

“Il Latini,” she read aloud. “I was just there two days ago.”

“Yes, my wife and I vacationed in Italy, and Il Latini was one of the restaurants recommended to us. I hope you got the prix fixe menu.”

“I don’t remember,” I replied. “We went to Italy to celebrate our 30th anniversary. Believe it or not, that was a long time ago. A college classmate I ran into at a trade show in Las Vegas recommended it. While we got caught up, I mentioned that we were leaving soon on a walking tour of Tuscany.

A Tough Place to Get Seats

She laughed. “When we went, it was hard to get in. They were even turning away people with reservations.”

“We scouted out the location beforehand, so we knew where would be walking,” I replied. “Of course, at that time of day, the square in which it is located was deserted. This lulled us into a false sense of security. 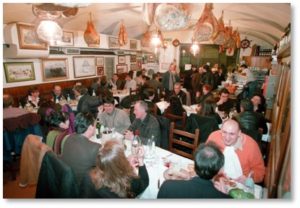 One of the many rooms

“When we got there, the owner/maître d’, a large, unshaven fellow with a big belly, held up two fingers in a V and inquired, ‘Due?’

Waving at us to follow him, he led us into a dark, noisy dining room. He seated us at a picnic table with three other couples, all from different countries: Brazil, Australia, England. The food, the wine, the company, and the ambiance made it one of the great dining adventures of our lives.”

“Remember the game and cheeses hanging from rafters?” she asked.

Now she was on a roll with her recent memory. “We lost count of how many dishes they brought out to us. The steaks were phenomenal, but all the food and wine was probably the best we’d had in Italy. We had no idea when we opted for prix fixe that they would bring food in such quantity and variety. And, you won’t believe the cost. Only about 60€ for the two of us!”

“We were there before euros,” I noted with a grin.

When we both paused for breath, I said, “What are the odds?” I continued. “My ESP told me someone would recognize the name Il Latini sometime today.”

I remember Ristorante Il Latini very well. It was the one free night on our Overseas Adventure Travel walking tour of Tuscany. We got to the Via dei Palchetti well before the restaurant opened its doors for dinner. The street was crowded but not so much that I was worried about getting in. Then more people arrived, and more, and it turned into a mob scene. The restaurant, located on the ground floor, didn’t look that big and I began to worry that a pleasant evening out was about become a disappointment.

Not to worry. When the doors opened and the crowd streamed in, we discovered that Il Latini stretched across several buildings. As we walked through several rooms I saw that the restaurant was much larger than it looked on the outside. 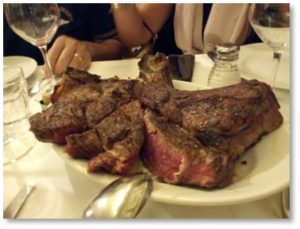 We introduced ourselves in multiple languages and studied the menu, which is a carnivore’s delight. Ristorante Il Latini is not the place for vegetarians and vegans to go. Like a Brazilian churrascaria, they bring big platters of different kinds of roasted and grilled meat along with bowls of pasta and side dishes. You help yourself and pass the bowls down the table, family style.

We feasted on wonderful food and excellent wine but the experience was even better. We had a great time as we shared our travels and histories along with the food. We have recommended Ristorante Il Latini to many people who were about to visit Florence but Seth’s experience is the first time I have heard of someone else eating there.

If you’re planning a trip to Florence, Italy, however, I definitely recommend dinner at Ristorante Il Latini. Don’t let the crowd bother you — just get there early. 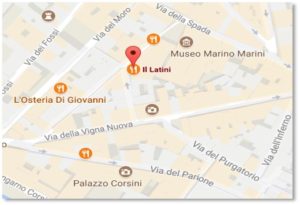 Now,you may wonder why was my husband wearing a Ristorante Il Latini staff shirt. It’s a thing. He buys shirts from restaurants that he likes.

I’m different. Having spent many years in advertising, I think that, if an establishment wants me to wear their shirt, they can not only give it to me but pay me to wear it. I guess that’s the difference between sentimental and commercial motivations

So if you see someone wearing a gray Il Latini shirt, ask him if his name is Seth. It could happen. This is a small world.