Mother Nature needs no invitation to remind us she is a force to be reckoned with. She recently presented us with Hurricane Harvey, followed by his sister Irma; devastating the Caribbean and parts of Texas and Florida. Two of the worst hurricanes in US history; they clocked in at category four and five, leaving unimaginable destruction behind them. Initial reports say costs are so severe they can’t be calculated. 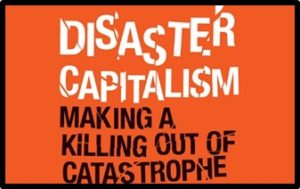 On the heels of her fury, damages continue to climb, with an estimated 11 million in insurance payouts.  These estimates do not take into account lost tourism and, once damages are totaled, costs are predicted to exceed $250 billion.

Natural disasters are fertile ground for retailers and service providers to engage in blatant exploitation of those affected. When natural disasters strike, it’s an invitation for Disaster Capitalism to make a killing on the catastrophe.

Ripping Off Those in Need

As Irma headed straight for south Florida residents were advised to evacuate immediately. Coincidentally, flights out of South Florida skyrocketed to more than $3,000 for tickets that would otherwise have cost a few hundred dollars per person. In what is typically the slowest time of the year for air travel, many major airlines profited shamelessly from those desperate to leave. 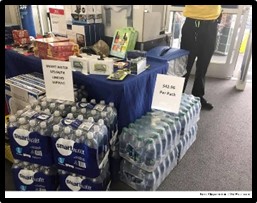 In Florida, price gouging is illegal following a declared state of emergency. However, since airlines are regulated by the Federal Aviation Administration and the U.S. Department of Transportation they are not subject to Florida’s price-gouging statute.  By Thursday a $358 flight from Miami to NYC was $3578.

Retailers profited from the survival needs of food and water by jacking up cases of water to over $100 with a $100 delivery fee despite laws designed to prevent them from doing it.

During Hurricane Harvey, reports of hotels tripling or quadrupling their prices, coupled with fuel prices escalating to cash-only sales between $4 and $10 a gallon, represented Disaster Capitalism at its finest.

This is not the first time catastrophe has resulted in greed. In the aftermath of Hurricane Katrina, dozens of private military contractors arrived looking to find ways to profit from the disaster while the government looked the other way. FEMA Director Michael Brown resigned over his handling of the response.

The Saffir-Simpson Hurricane Wind Scale runs from a Category 1 through a Category 5, with Category 5 classified as 157-plus mph winds. A Category 5 storm results in catastrophic damage, flooding and destruction. The National Weather Service called Hurricane Irma one of the strongest storms in history, sustaining maximum winds of 175 mph.

While this type of destruction is indiscriminate; the poor are hit harder. Hurricanes target wealthy and poor alike, but the homes of the underprivileged are poorly constructed, often built on hillsides or less-stable ground, and therefore more vulnerable. They have little to begin with, and have no financial means with which to extricate or help themselves.

Homes built to withstand the force of hurricane winds are often on high ground or elevated, with hurricane glass and shutters. They aren’t an iron-clad guarantee, but offer owners greater odds of reduced damage.

Money is king during a disaster. It buys medical and rebuilding services, transportation, and food. Those less fortunate are relegated to crowded tent cities or living in the street with no means to pay for food or shelter.

Then there are Good Samaritans. While Irma and Harvey raged, people opened their hearts, their doors and their wallets. Communities offered up accommodation, meals, transportation, clean-up services and support. Facebooks groups sprung up to get the word out; Airbnbs offered to take in families in need, communities launched fundraisers and supply trucks rolled. 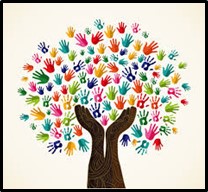 Many volunteers were survivors of Hurricane Katrina, and understanding the impact this was having; formed a digital chain of information, services and shelter across five states.

Southwest Airlines flew more than 60 stranded animals out of Houston after Hurricane Harvey under Operation Pets Alive. JetBlue said they would charge a maximum of $99 up to the last available seat for direct flights and a maximum of $159 for connecting flights. Scuba divers, boat owners and emergency service providers risked their own lives to find and help those in need.

On the other hand, Delta Airlines jacked their regular ticket price from Miami to Phoenix from $325 to $3,200. American Airlines took a one-way flight for $160 and raised it to $1000 and Spirit Airlines simply cancelled all flights from St. Thomas before the storm even hit.

Investors pay close attention to the weather. Once a tropical storm is named, it attracts the attention of Wall Street. Hedge funds employ meteorologists to identify the severity of the threat as quickly as possible. In this case, they were already weighing their exposure to Harvey and bracing for Irma.

As live reports began to broadcast the devastating potential of the storm, stocks began to move. Insurers began selling off. Those concentrated in Florida were hit hard as Hurricane Irma began her trajectory, taking double-digit dives in a single day as the severity of the storm climbed.

Stock in big-box stores like Lowes and Home Depot does the opposite and rises.  Investors know that what they sell will be in high demand when restoration efforts begin. All of Lowe’s store managers go through disaster training, Home Depot has a 600,000-square-foot rapid-deployment center and their prices do not change.

People in need should never be exploited or used for financial gain. Demand for survival products increases 300% up to and through an imminent disaster. I’d like to believe those motivated by greed and profit will discover payback comes in unexpected ways.