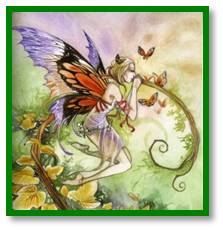 In last week’s post on Garden Therapy, Susanne Skinner mentioned a magical garden and it reminded me that gardens don’t need to have fairies to be magical. While I have never seen a garden fairy, when I sit on my deck and look at the perennial garden in summer I see three different magical creatures all the time. They are magical because they can do amazing things that no other creature—and certainly no fairy–can accomplish.

Butterflies are magical to watch, of course, as they flit along like airborne flowers in a rainbow of colors. But they don’t start out looking beautiful and delicate and colorful. In their life cycle, butterflies go through a complete metamorphosis that includes four stages: egg, larva, pupa, and adult. In each phase of their development, they look totally different. The larval stage includes five “instars” or growth steps during which they are sluggish, earth-bound and sometimes ugly.

The final instar is the pupa, or chrysalis, from which they emerge with slender bodies and the gorgeous wings. This is science, of course, but the entire process is so complex and mysterious that it seems magical to us non-entomologists. This is especially true when you consider that the end result of this complex process is an ephemeral creature with a fairly short life span.

Butterflies remind us that appearances are not everything, that even the ugliest among us can be beautiful, and that the change for the sake of change can produce something truly marvelous. 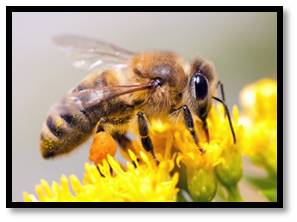 The magic of bees lies in what they do rather than what they are. Bumblebees are not supposed to be able to fly because they lack sufficient wing area and flapping speed. This myth arose sometime back, although its origins are murky, when an aeronautical engineer supposedly did the calculations and proved that bumblebees aren’t capable of flight. Unfortunately, he left out a few key variable in the process. Well, bees do fly and quite well, too—humming all the while.

Bees are the garden’s busiest workers as they collect the nectar of flowering plants and bring it back to the hive. There they convert nectar into honey by for the colony to eat during times of scarcity. How does the process work? LiveScience gives us a simple explanation:

“When a honeybee returns to the hive, it passes the nectar to another bee by regurgitating the liquid into the other bee’s mouth. This regurgitation process is repeated until the partially digested nectar is finally deposited into a honeycomb.

Once in the comb, nectar is still a viscous liquid — nothing like the thick honey you use at the breakfast table. To get all that extra water out of their honey, bees set to work fanning the honeycomb with their wings in an effort to speed  up the process of evaporation.

When most of the water has evaporated from the honeycomb, the bee seals the comb with a secretion of liquid from its abdomen, which eventually hardens into beeswax. Away from air and water, honey can be stored indefinitely, providing bees with the perfect food source for cold winter months.”

That’s amazing. The next time you put a spoonful of honey in your tea, think of the hard work, the dedication, the perseverance and the industry needed by the entire hive to produce it.

But wait, there’s more. Honey has anti-bacterial, anti-fungal and anti-inflammatory properties. It boosts energy, relieves allergies, improves memory, and suppresses coughs. You can use it to treat wounds, burns and dandruff and it can even help you sleep better. If that’s not magical, what is? 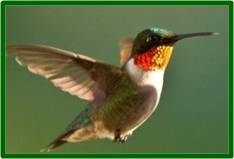 Bigger than a bee but smaller than a songbird, hummingbirds flit about the garden like jewels on wings so diaphanous and fast-moving—about 80 beats per second—that they’re almost impossible to see. That fast movement is what makes the humming sound.

Hummingbirds can fly right, left, up, down, forwards, backwards, sideways, and even upside down. They can stop in mid-air and hover by flapping their wings in a figure-eight pattern. Although they have feet, hummingbirds use them only for perching and never for hopping or walking. They insert their long tapered bills into long tapered flowers to extract the nectar they eat—along with insects—which they must do often to support their fast metabolisms. Male hummingbirds sing for sex, a technique adopted by human troubadours, crooners and rock bands.

Most hummingbirds migrate to Central America in the winter. Those that cross the Gulf of Mexico fly non-stop for the 18 to 22 hours it takes to cover the 500-mile distance. This proves that even the smallest and gaudiest among us can have the strength and stamina it takes to do great things.

The next time you’re in a garden, by all means take time to smell the roses. But also spend a few moments watching the three magical creatures flitting over and buzzing among the flowers. These real garden fairies may even be more magical than the mythical creatures of stories and legends. And they’re right there in the garden for us to watch every summer day.