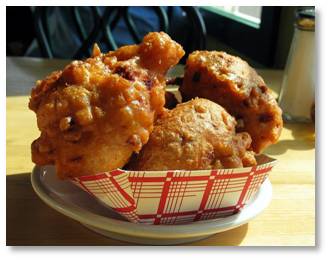 After last week’s heavy posts on creativity in marketing and advertising, I’m going for something lighter — and tastier. Today I’m talking about clam cakes.

These golden nuggets of goodness don’t resemble the crab cakes you get in Maryland or the ones served as appetizers in seafood restaurants.

These are not like the fishcakes you make with leftover fish and mashed potatoes. In fact, if they’re flat like a patty, they are not really clam cakes.

Because clam cakes, more accurately defined as clam fritters, are a regional specialty. You will find them only in Rhode Island and along the South Coast of Massachusetts from New Bedford to Cape Cod. Clam shacks and seafood restaurants serve them in that part of the state. They come piled in grease-stained boxes like fried clams and French fries. You savor them in summertime as both a seasonal and a regional specialty.

If you don’t mind the mess and the calories of something fried in bubbling deep fat, clam cakes aren’t hard to make. A recipe for making them follows. There are, of course, as many recipes for clam cakes as there are for any other regional food and everyone has their own favorite. Cooks in restaurants and home kitchens add individual touches of “improvement” to make them hotter or sweeter or saltier, according to taste.

Emeril Lagasse, who hails from Fall River on the South Coast, has a recipe with shallots, green onions and cayenne—ingredients that I don’t remember ever tasting in the clam cakes that I ate while growing up in Somerset, MA. In fact, I doubt those fry cooks knew what shallots and cayenne were. 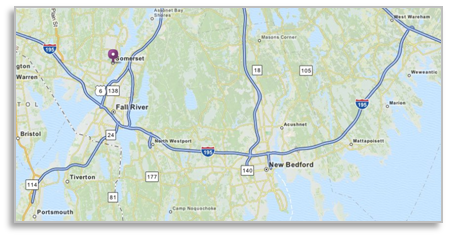 I no longer live on the South Coast, and clam cakes are virtually unknown any further north. This is disappointing although good for my waistline. I remember getting the best ones at a little clam shack along Route 6 in Westport, MA called Macray’s. It was perfectly located for stopping by if you were coming home from Cape Cod, from a day at Horseneck Beach, or from the rides at Lincoln Park. We stood in long lines to get clam cakes hot and fresh in, yes, grease-stained boxes.

The old Macray’s has been closed for many years, unfortunately, but a new version — Macray’s Seafood II — rose last year, Phoenix-like from the hot fat. It has a new location in Tiverton, RI.

Proprietor Bob Lafleur, who got his start cleaning up the old Macray’s parking lot before working his way inside and learning to cook, has revived the original recipes. including the one for clam cakes. He uses only flour, eggs, water, baking soda and “plenty of chopped clams.” I haven’t driven 75 miles down for a personal tasting, but Michael Gagne of the Fall River Herald News declares them “light and fluffy.” 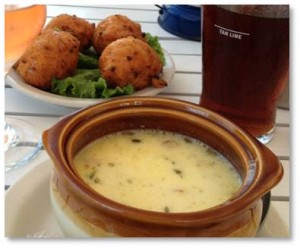 Last year I ate clam cakes at the Black Bass Grille in Padanarem MA, which is many steps up from a clam shack. You can order them as a starter for $.50 each. They were excellent, with an unusual maple syrup glaze.

Two weeks ago I found clam cakes on the menu at Woodman’s in Essex MA—a surprise indeed because it’s on the North Shore. I decided to pass, though, at a price of $2.50 per clam cake. When I was a kid, that would have bought enough clam cakes to feed a crowd.

If you want to try your own hand at making clam cakes, here’s a simple recipe for clam cakes from Cooks.com:

Oil that is too hot or cakes which are too large will cause burning or uncooked centers. Adjust temperature up or down slightly to compensate. A good starting temperature is 360 degrees.

The clam cakes will float; turn them over gently as they rise to fully cook both sides. Do not overload the cooker, as this will reduce heat too much. Fry only a few at a time.

Drain on paper towels. Serve with tartar sauce or Portuguese hot sauce, or just garnish with slices of lemon and a few sprigs of fresh parsley or kale. Clam cakes are best eaten while still warm but can be served at room temperature as well.

Sit Back and Enjoy

These are an old New England favorite and have been served at Cape Cod clam shacks and Rhode Island sea-side diners for generations.

You can, of course, adjust as you wish. I always like more clams. Where I come from, you can’t have too many clams. The same recipe also makes good corn fritters if you swap out clams for corn niblets and milk for clam broth.

Then sit back with a cold beer and enjoy.