We know that summer is lobster time because we hear it everywhere. Yankee Magazine has dedicated its current issue to the subject and is offering a giant lobster giveaway that includes eight pound-and-a-half-lobsters plus a pot to cook them in and nut crackers to use when eating them. I decided that prize was worth overcoming my aversion to online information gathering and provided mine. The issue also tells you how to make sure a lobster is fresh, how to cook lobsters and the proper way to crack the shells and extract the meat. 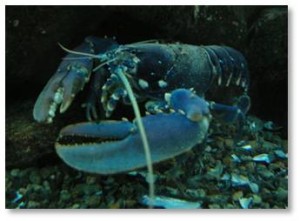 A “blue-ish” lobster in the ocean

Not everyone eats or likes lobster, of course, although it is almost heretical to admit that in New England. Homarus Americanus is not kosher or halal so Jews and Moslems abstain. That leaves more for those of us who enjoy consuming cannibalistic scavengers that looks like bugs on steroids and can crush a careless finger in one claw.

On the positive side, lobster provides a lot of protein while being low in fat and calories. It’s also an excellent source of zinc, copper, selenium , phosphorus and vitamin B-12. A lot of people avoid it because the meat is high in cholesterol, even though we have recently learned that dietary cholesterol has little impact on the cholesterol in your arteries. Lobster meat is also high in salt and contains mercury, although it’s lower on the mercury scale than most other shellfish.

The bottom line is that it’s ok to eat every once in a while but not too often—not that one is tempted to do that given the price.

What @YankeeMagazine doesn’t tell you is to ask for hard-shell lobsters only. Summer is when lobsters molt, you see, moving into a larger shell like a college grad getting his first apartment. That means you get a lot of shell and very little lobster.The claw of a hard-shell lobster is filled with meat but opening a soft-shell claw can be a distinctly disappointing experience. Although the shell is thinner, you pay for a lot more shell and the extra room often fills with water so you pay for that, too. I once opened a soft-shell claw and got a tiny limp piece of meat that made me swear off them.

Some people claim that soft shells are tastier and tenderer. They also say the same things about small or “chicken” lobsters versus big ones. Personally, I have never understood the whole “more tender” discussion. Lobsters are arthropods with external shells so they don’t need tough muscles to move any extra size. They also live on the bottom of the ocean, and the water helps to support their weight. Even the biggest get around pretty nimbly and I have never seen one with a bulging shell that looks like Arnold Lobsternegger.

Some people think that lobsters are naturally red because that’s the only way they see them. In their natural state, however, lobsters are dark green to blue green and some have even been a bright blue. They don’t get red until you cook them. That bright crimson is why our colonial ancestors called the British Regulars “Lobsterbacks.”

My parents once bought an 18-pound lobster in Fairhaven, MA, and brought it home to our house in Somerset. Dad filled a big double wash boiler with water and added sliced lemon. He put it across two burners on the stove and heated the water to boiling. Then he dumped in Lobsterzilla. The crustacean bucked so hard he almost knocked the makeshift pot off the stove; Dad had to hold it on until the critter was dead. I watched this process with a combination of dread, fascination, pity and hunger. When the giant was cooked, Dad took him out and laid him on a cutting board. 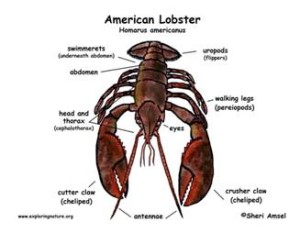 Lobsterzilla was a hard-shell so Dad used a hammer and chisel to open up the shell, which must have been at least a quarter of an inch thick. He did it carefully to keep the big crusher claw intact. We cleaned the claw shell and kept it. That claw hung around the house for a long time. It might still be there. We ate all the lobster we wanted on the patio picnic table and didn’t have to worry about making a mess.

A lot of people would say that a lobster that big would be tough and chewy.  They would be wrong. Lobsterzilla was delicious. Plus, in a crustacean that big, there is meat in almost every part, not just the claws and the tail. The knuckles (my favorite part) were tender and juicy and yielded almost as much meat as a smaller lobster’s tail. We cut into the walking legs and extracted meat from them. We also got big scallops of meat from the tail flippers. In short, we ate everything edible that could be gotten from him and none of it was tough.

Oddly enough, there is no Red Lobster restaurant in New England.  That’s probably because of the intense competition from local seafood restaurants and lobster shacks. The latter, usually located near or on the water, keep fresh lobsters in big circulating tanks and offer simple meals of boiled lobster with corn, fries or coleslaw and lobster rolls. The latter is a uniquely New England concoction that consists of a lobster salad packed into a butter-grilled hot dog roll. Where to get the best lobster roll is a matter of taste and opinion. While no one has ever paid me to write a competitive review—a task I would accept in a heartbeat—many publications have issued such lists. 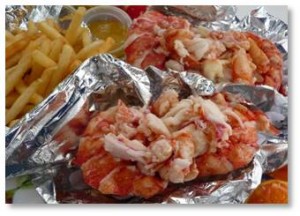 The lobstah rolls at Red’s Eats — Where’s the bun?

Over years of eating “lobstah” rolls, however, I have found my own favorite—Red’s Eats in Wiscasset, Maine. Waiting in the long line is worth it because they pack the meat from one entire lobster into the roll. It’s all meat, no fillers, and you can barely see the bun.

Red’s has received awards from practically every food and travel publication, website and TV program there is and for good reason. Too bad it’s so far away — or maybe it’s good for my waistline. My husband prefers the offering at Skipjack’s but they just closed so he will have to find a new favorite.

If you’re interested in making your own comparison among the many types of lobstah rolls, here are some suggestions from the experts:

After our long cold winter, it’s finally warm and we can think of summer things, like watermelon, corn on the cob, fresh tomatoes  — and lobster. Eat up!