We spent a few days in Washington DC recently to visit with our grandchildren, who live nearby. We also got to spend some time visiting museums. DC has to be the museum capital of the world, with institutions of all types. You can see things from dinosaurs to the original Starship Enterprise model. I focus on art and keep track with my Life List of Art Museums. In just a couple of days we were able to see four museums, not all involving art.

Cézanne at the National Gallery

We started with the exhibit of Cézanne Portraits in the National Gallery’s west wing. While Cézanne has never been one of my favorite painters, I found this comprehensive show thought-provoking.

“The exhibition brings together some 60 paintings drawn from collections around the world. They encompass his entire career and include portraits made in Paris, where he went to launch himself as an artist, and in Aix, which remained his anchor throughout his life and where he eventually settled permanently. Several paintings are exclusive to the National Gallery of Art’s presentation, while some works have never before been exhibited in the United States.” 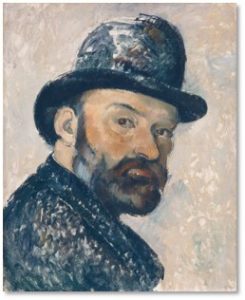 Self Portrait with a Bowler Hat by Paul Cezanne

What came across most vividly to me was what I found between the brushstrokes: Cézanne’s emotions as he painted what I thought of as “angry portrait.s” Located in the first room, these images seem to have been painted in a rage, as the signage points out. It looks like a furious artist slathered paint on the canvas with a palette knife while in the grip of barely controlled anger.

Later, we see several of the 27 portraits of his wife, Marie-Hortense Fiquet. Mme. Cézanne wears the same red dress and a variety of flat, emotionless faces that could almost be masks. Although she was an accomplished woman—a model, bookseller and/or bookbinder—she sits passively with her hands in her lap. 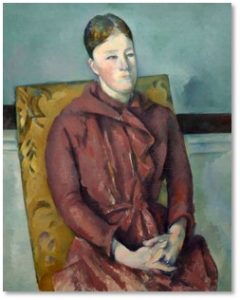 She does not appear to be happy. Looking from one portrait to another, I got the distinct impression that Paul Cezanne didn’t like Mme. Cezanne very much—and she returned the feeling. They lived separately for much of their married life.

Other notable people of the time appear in the portraits, along with ordinary folks. This exhibition gives us a fascinating look into the people who surrounded Paul Cézanne in his time, as well as what he thought of them. Even if you have to read between the brushstrokes.

The Tomb of Christ at the National Geographic

One afternoon I walked behind the Mayflower Hotel to the National Geographic Museum on 17th Street. It currently offers a multi-dimensional exhibit called “The Tomb of Christ” that was visually amazing, educational, and highly interesting.

“Be virtually transported to Jerusalem and discover the fascinating history of the Church of the Holy Sepulchre in an immersive 3-D experience unlike anything you’ve seen in a museum before. Built in the fourth century, the tomb of Christ, or the Holy Edicule, has just undergone a historic restoration. Learn about the restoration effort led by an interdisciplinary team of conservation experts from the National Technical University in Athens, who used new technologies including LIDAR, sonar, laser scanning, and thermal imaging to preserve this important site.”

The museum recommends that you get tickets in advance but it was late in the day and uncrowded so I just bought my ticket and walked in. The exhibit occupies multiple rooms in the museum and you move from one to another. It takes you around and into the Church of the Holy Sepulchre and the Holy Edicule — the small structure within the church that encloses both the tomb where the body of Jesus was supposedly laid to rest and the antechamber where the angel of the Lord appeared.

The Holy Edicule had been shored up with iron beams to prevent it from falling apart due to earthquake damage and a fire in the church. The fix worked but it was ugly. 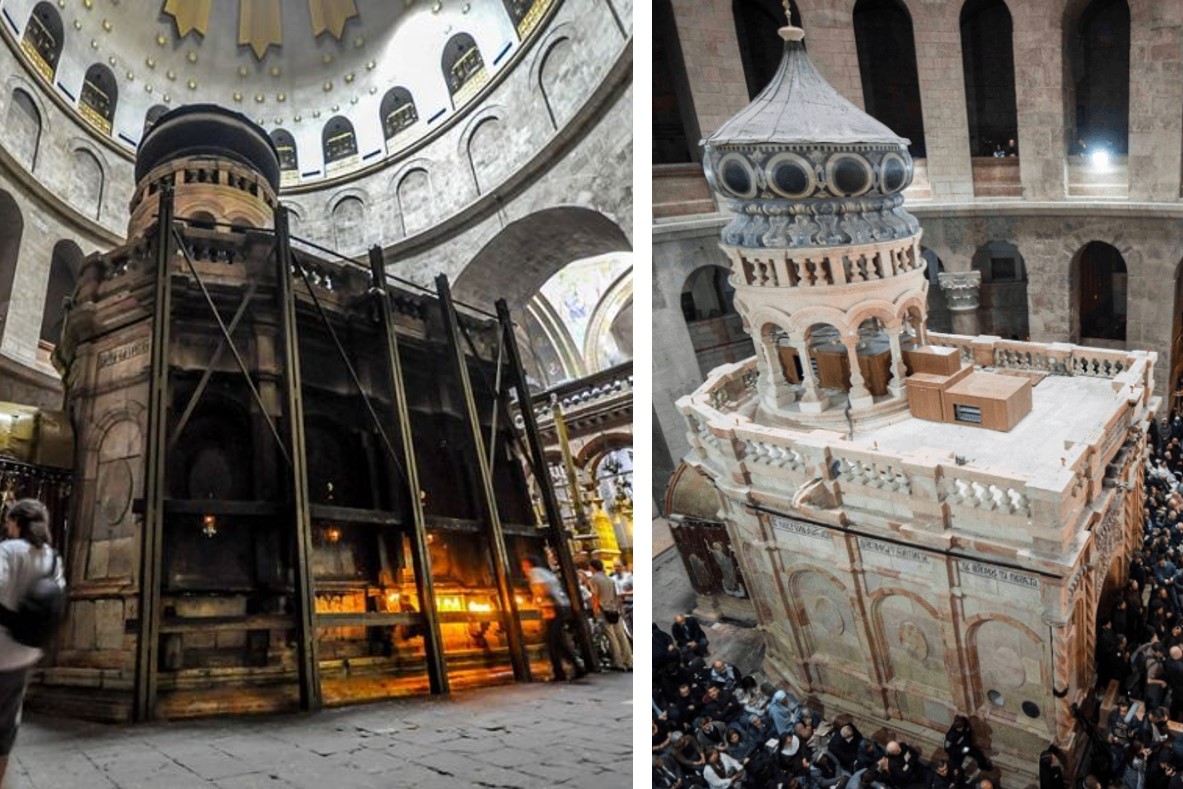 The Holy Edicule before and after restoration

The transformation of the Holy Edicule is a remarkable achievement, not least because it took place in the space of just one year. The only time the restoration team had to close the structure was when they lifted the marble covering over the actual tomb so they could seal it to prevent liquid masonry from filling in. The result is a structure returned to its original beauty.

Inside the Church of the Holy Sepulchre

No Adventure in the Courtyard 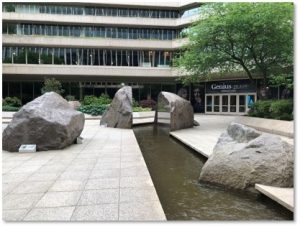 Boulders in the Courtyard

Leaving the exhibition, I strolled across the museum courtyard to the next building and shook my head at the space’s unintentional irony. The courtyard is studded with large boulders around a “stream” water feature — the kind of rocks that just call out to kids and say, “Climb me.”

Now, the national Geographic Society is all about exploration and adventure, risk taking and new experiences. Yet a multitude of signs warn visitors that no climbing is allowed. So, no adventure on the National Geographic’s home turf. Everyone stay safe. 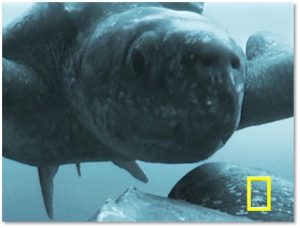 In the second building, I wandered along a corridor lined with photographs of previous expeditions and items from those trips, like cameras and gloves. My favorite was a screen that showed “crittercam” video.

These shots come from video cameras attached to animals, from seals to grizzly bears. Marine biologist Greg Marshall developed the process, which has been implemented by teams all over the world. We get to see what the animal sees as it swims or wanders with no human being around to affect its behavior. The videos were so fascinating I could have watched them all day.

Click on the link to learn about crittercam from its inventor, Greg Marshall,
and watch some of the videos.

Lastly, I walked around the exhibit building of the Museum, looking at the huge pictures taken on National Geographic expeditions from all around the world. It felt like taking a little trip inside our weekend away.