A couple of weeks ago I wrote about financial privilege. Today’s post tackles gender privilege. Okay, I can hear the men groaning: not again! Relax, guys, this is not about sex. I’m talking about the rest of life. 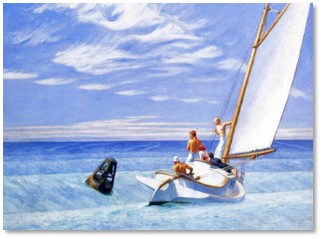 The thing about gender privilege is that it means men don’t have to think about stuff that has a big impact on women. You either take it for granted or you just accept the opportunities you have been given as The Way Things Are. Huge obstacles for women barely make a bump for men.

Think of gender privilege as a tsunami. The men in boats out at sea experience just a big swell that they ride up and over without really noticing it. The women on shore face a catastrophic event.

The most recent example comes from Sunday night’s Grammy Awards, notable for the paucity of women who were nominated, and even fewer who were successful. In response to criticism, Recording Academy President Neil Portnow put the blame on women, saying that they had not, you know, made a real effort. (Clearly, he’s never seen Tina Turner in concert.)

When queried about the lopsided awards by Variety, Mr. Portonow said:

“It has to begin with . . . women who have the creativity in their hearts and souls, who want to be musicians, who want to be engineers, producers, and want to be part of the industry on the executive level . . . [They need] to step up because I think they would be welcome. I don’t have personal experience of those kinds of brick walls that you face but I think it’s upon us—us as an industry—to make the welcome mat very obvious, breeding opportunities for all people who want to be creative and paying it forward and creating that next generation of artists.” 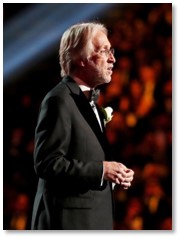 Neil Portnow at the Grammys

Now, I’m not a big music fan but even I recognize that female recording artists like Beyoncé, Lorde, Cher, Adele, Lady Gaga, and Taylor Swift have stepped up. They have also made huge profits for the men who run recording companies. But the really significant part of Mr. Portnow’s ridiculous, self-serving statement is when he said, “I don’t have personal experience of those kinds of brick walls.”

And if you lack that personal experience, it’s easy to ignore the walls, to take for granted The Way Things Are, and to believe that it really does make sense for the nominees and winners to be mostly men. Here are two stories about how that can work:

When I graduated from college with my Liberal Arts degree clutched in my eager hand, I started looking around for the kinds of jobs that would help me to establish a career. My brother suggested that I take a management training course. It was a good idea but it came from someone who just accepted that management training was available to everyone. I knew better.

His recommendation came at a time when newspapers separated Help Wanted ads by gender: Help Wanted Male, Help Wanted Female. The best jobs appeared, of course, in the former list. Jobs for women all fell into the entry level, manual labor, and retail sales categories. Management training courses did not appear here. Women were not invited or considered.

Things have improved since then for a lot of reasons but the principal still applies.  Men have advantages, connections, networks, organizations and a code of behavior that they accept as normal. If pressed to think about it, most of them would probably say that everyone has such opportunities because they can’t imagine otherwise. Or, like Mr. Portnow, they might say it’s the women’s fault that they can’t get into the kinds of programs that offer entrée to a career.

During my high-tech marketing career, I ran the advertising programs for several high-tech companies. This involved meeting with “media reps,” the sales representatives for publications likely to be read by our target audience. The reps did their best to establish relationships and I was taken out to nice lunches on a fairly regular basis, as well as invited to dinner events and parties. Cool beans.

What I did not know was that male advertising managers got a lot more than lunch. They were invited to golf outings at fine resorts around the country—all expenses paid. I found out about it when a female media rep got fed up with this lopsided arrangement and set up a “spa weekend” for the women in her patch. (The company already advertised in this magazine so there was no conflict.)

I got to fly on a corporate jet, spend a few days at a beautiful resort, get spa treatments, go horseback riding on the best horses I ever rode, and network with other women in corporate advertising departments. We all bonded in a way that was probably normal for men in their golf foursomes but new to us. The trip was wonderful but it also opened my eyes to the scale of gender-based difference in marketing opportunities.

Gender Privilege: Under the Radar

See what I mean? The world is full of opportunities and advantages that men take for granted and women not only have no access to but don’t even know about. Award nominations that go to men as a matter of course as they glide over that ocean swell but leave women waiting on the shore because they never got a place on the boat. 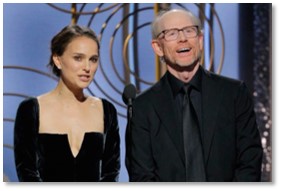 Natalie Portman and Ron Howard at the Golden Globes

That’s why Natalie Portman made the point when she gave out the award for Best Director at the Golden Globe Awards. When reading the list of nominees, she said, “And now, here are the all-male nominees.”

Gender privilege means that you have a place on that boat and you simply don’t notice that everyone around you is a dude. Or you notice but you shrug and say, “That’s just The Way Things Are.”

Wake up, guys. Look around you. Are you riding the ocean swell and ignoring the big wave? Do you have only men on your team but say, “I just hire the most qualified people?” Or do you, like Mr. Portnow, blame women for not stepping up to get a place on the boat when they never got a chance to buy a ticket?

Pay attention and you will see your gender privilege, possibly for the first time. That’s Step One. Step Two is what you do about it.