I know the first rule of cooking for others is never to try out a new recipe on your unsuspecting audience. It’s a risky thing to do, especially if a group is counting on your main course or dessert for part of the meal. But I love trying new things and I dislike making the same recipe over and over so sometimes I take the leap—and bring my friends along with me. 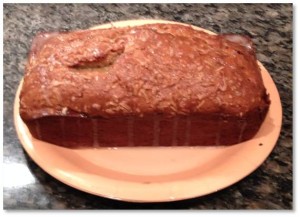 This past weekend, the risky cooking experiment turned out well. For a meeting of my science fiction writing group, Spacecrafts, I baked a Coconut Banana Bread with Lime Glaze.

The recipe came from My Recipes via Cooking Light, it had a four-star rating and it looked pretty simple so I jumped. Everything went smoothly and the finished product looked great. I didn’t have a lime, though, so I made a lemon glaze and that worked just fine. My Spacecrafts writing group friends ate two thirds of it at the meeting and I left the rest with the host.

Last month was a different story, however. I drew the dessert course for an in-home dinner of our church, the First Parish of Sudbury. The day before, I cooked two pie shells and let them cool. The day of the dinner I filled one with chocolate pudding and covered it with whipped cream to make a chocolate cream pie.

The other one was a challenge. I wanted to make a lemon-meringue pie from scratch and improve on the meringues I had made before—which always looked limp and flat to me. So I used a Gourmet magazine recipe via Epicurious for plain old Lemon Meringue Pie with nothing fancy or unusual. It had a 3 ½-spoon rating so it looked safe.

Following the recipe to the letter (and even timing all the steps), I juiced and zested, separated and mixed, cooked and stirred until I had a pie filling that looked and smelled like a classic, with just the right amount of tartness to balance the sugar. When I poured it into the pie shell, however, it seemed looser than it should have been but I thought that it would set while it was baking. The recipe called for 15 minutes in the oven but my oven tends to run cool so when the meringue looked barely tan, I left it in for another 10 minutes and then 10 more minutes after that. Surely, I thought, it would be ready by now. 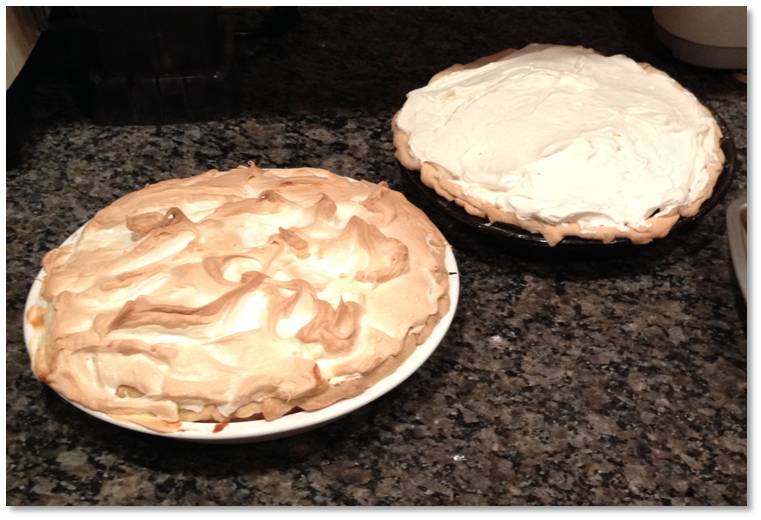 Unfortunately, when I removed the pie pan from the oven, the filling sloshed from side to side. I took both pies to the dinner and was glad I had the backup. Everyone said the lemon pie tasted good but it ate more like lemon pudding with a meringue on top than a pie. I wish I had read the comments in advance because it turns out that many cooks had exactly the same experience with this recipe. The only question in my mind is why it had such a high rating.

Risk or No Risk?

Should one take a risk when cooking for others? The safe answer is “definitely not” but, with only the two of us in the house, it’s hard to practice in advance. We just don’t want to eat a whole pie or banana bread ourselves before serving the same thing to others: Too much sugar, too many carbs and calories. And the cat doesn’t eat dessert.

Having worked for so many years in high-tech startups, I understand the risk/reward equation pretty well. One reason we were able to retire is that the risk I took on some of my stock options paid off. In some others, of course, it didn’t. Those two turned out to be not just soupy custard, they were burned crust. Fortunately for us, there were more of the former than of the latter.

The good news is that my friends, members of my writing group and book group, and fellow parishioners don’t mind being guinea pigs for my cuisine. They enjoy the home-cooked food even if it’s not perfect and they appreciate the effort. Besides, the food from my kitchen doesn’t contain any of the chemicals, dyes, flavorings and preservatives that typically come with off-the-shelf baked goods or even things cooked in the supermarket bakery. If asked to vote, they would vote for the risk.

Life is like that, I think. If you go for the safe, the known, the expected, and comfortable, you will get by but there will be no big surprises, either for better or for worse. Comfort is the enemy of growth and mistakes are how you learn. So I will continue to try new things and ask my friends to judge their success.

But next time, I’ll read the comments first.