Change, even when it’s for the better, is nerve wracking. We live in a world of imperfect information, guaranteed surprises, and unpredictable outcomes.  Unexpected situations are the new normal; when we find ourselves facing one we have to deal with it. As much as we might want to continue as if nothing has changed, we have to acknowledge that change is part of everyone’s life. 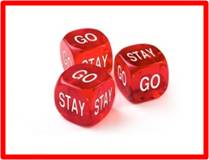 Dealing with change is as hard for me now as it was when I was in my twenties. When I find myself in a situation I did not anticipate and for which I am unprepared, I am usually faced with difficult decisions—which are really just choices that lead to change. Despite my age and experience it is still stressful.

When it comes to jobs, I was exactly where I was supposed to be on my professional path. I wasn’t looking for change; I was enjoying work that was meaningful and fun. It was an extremely good fit for me and I honestly believed it was my last job—a wonderful company to work for and to retire from.

But there are two things I have learned from my work life. First, unanticipated things will happen. When they come, examine all the data necessary for processing change and weighing options. Second, listen to your inner voice.

Sometimes we find ourselves headed in one direction, and suddenly we are someplace else. I often wonder if these detours are part of life’s design – we end up exactly where we are meant to be through no planning on our part.

And so it was with my job. One day I came into work to find a complete management change. As a privately held company, this should not have surprised me but it did.  There had been one the previous year, as well as a change of ownership. I joined right after this and knew I landed in a very good place. A small company with relatable leadership, an employee-centric culture, and awesome colleagues is exactly what I wanted and exactly what I found. It was my dream job.

And then one day it wasn’t. Less than eighteen months later change came again. In a small company change is visible, emotional and difficult. Even when a company needs to change, that change comes at the expense of people and programs. I felt that “here we go again” feeling that comes from knowing how it ends.

Despite a massive layoff, I was assured I was part of the go-forward team. I heard the words but did not feel them in the way one feels long-term job security beneath their feet. I feared that continued employment was short term. There was evidence to support that fear. Others who had been given the same reassurance were no longer there. Go forward today, get out tomorrow.

This is not unusual. When upper management changes they build new teams with their own people. Those who worked under the old regime are considered legacy employees and once the top echelon is in place, change rolls downhill.

Life takes us to unexpected places sometimes. The future is never set in stone, remember that.

I knew it wasn’t working. The style and focus of the company had changed and I no longer felt at home there. I tried hard to ignore it. The energy had shifted and not in a good way. There was minimal executive investment in what had been an employee-centric culture but I still felt it could be turned around.

The job market is good right now, and I have a strong professional network. I had immediate opportunities, but was reluctant to move forward.

Two things helped me make a decision. One of them came from my new manager, who read a blog I posted about hiring character versus skill. I referenced a public company I worked for many years ago and the cost of buying out the CEO’s contract when his character proved to be fatally flawed.

My new manager was concerned (perhaps even paranoid) that readers might think the blog was in reference to our new management team because my name and company name appears on my Linked In blogs. This told me he hadn’t really read the blog and made no effort to get to know me. He wanted me to re-write it. I read it at least twenty times before deciding not to honor his request. I knew then that I would not stay.

The second and equally compelling reason was an out-of-the-blue email from a former manager who had joined a new company and was building a marketing team. It was an incredible opportunity to work for a man I liked and respected in a company with good energy.

A lunch and meeting with the CMO put everything in perspective. I felt a pang of sadness when I finally acknowledged my future was not where I thought it would be. Even good change is hard—you must let go of the old before you can embrace the new.

A series of events and a bit of serendipity led me to an unexpected place. Sometimes you get what you need when you need it, but the decision to go was not an easy one.

Stepping onto a brand-new path is difficult, but not more difficult than remaining in a situation, which is not nurturing to the whole woman.