Skip to primary content
Skip to secondary content
One of the many things we learn when training with @BostonbyFoot is that we walk through time, over water, and underground. Not literally, of course, but Boston’s history is three-dimensional in many ways. In Boston’s Back Bay, for example, we stand on what was originally swamp land and tidal mud flats. That unusable—and unpleasant—area was filled in during the years from 1857 to 1900 and it was done pretty much block by block. 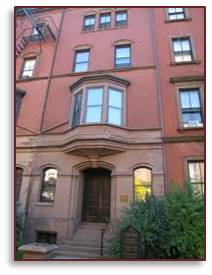 So as you walk west on the long streets:  Beacon, Marlborough, Newbury Street as well as Commonwealth Avenue, you are walking through the period of time in which the land was created and the houses were built. You can also see a progression of the architectural styles that developed in that period. These stately town houses are beautiful when seen from the outside, but what did they look like on the inside?  It’s hard to tell from the street because the houses are long and narrow (typically just 25 feet wide) with windows only in the front and the rear. The back ends face service alleys.  Fortunately, you can find out by visiting one of three “house museums” that present a slice of early Boston life.

Yesterday my husband and I visited the Gibson House Museum (@The_GibsonHouse) at 137 Beacon Street (between Arlington and Berkeley).  Outside, the magnolias flaunted their magnificent pink-and-white blooms on a gorgeous 21st-century day. We stepped across the threshold to enter the world of 1860.

The house, along with the one next door, was built from 1959 to 1860 by the widow Catherine Hammond Gibson, who moved there from Beacon Hill with her son, Charles Hammond Gibson. It was designed in the Italian Renaissance style by the noted Boston architect Edward Clarke Cabot, and is built of red brick and brownstone. Its interior is what one might call tastefully ornate. Our guide, Jonathan, was extremely knowledgeable and enthusiastic, which made for a very interesting tour.  We learned a great deal about the house and how it operated, the family and their history, the culture of the time, and how the house became a museum. The Gibson House is filled with original nineteenth-century furniture, wallpaper, china, kitchenware, carpets, clocks, and many marvelous paintings, including a family portrait by Thomas Sully. 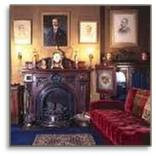 The Gibson House gives a whole new meaning to the term “upstairs/downstairs.”  An unusually tall house for the Back Bay at six levels, it must have forced its servants to be in good shape. I felt sorry for the maids who would have had to climb all those dark, narrow, twisty stairs in long skirts and while carrying heavy trays, platters, and buckets.

Our tour group was small—only four people—and we were the last tour of the day so we were able to spend more time in the museum than we expected. When we finally left, we headed over to @Skipjack’son Clarendon Street for their excellent chowdah and a seafood dinner. We enjoyed yesterday’s tour so much that we’re planning to visit Boston’s other two house museums: the Harrison Gray Otis House, one of three houses with this name, all designed by Charles Bulfinch, and currently the headquarters of Historic New England, and the Nichols House Museum on Beacon Hill. Next Saturday’s Boston by Foot lecture is on land building in Boston and I’m looking forward to it. It’s fun to walk on water.