I’m always fascinated by the law of Unintentional Consequences. People, often with the best of intentions, sometimes act emotionally and don’t always think things through completely or make all the connections. When you put farm animals together with the denizens of concrete jungles, this disconnect is more likely to occur. In this light, I have been watching with some interest a conflict that has been brewing in New York City, Chicago and several other big cities about the horse-drawn carriage industry. 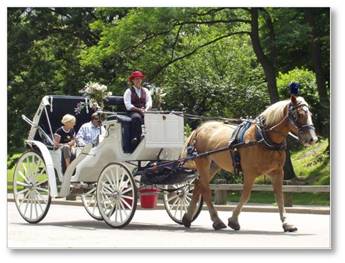 We have all seen these vehicles, particularly in movies like Barefoot in the Park. They provide a quaint venue for romantic scenes as they wend their way slowly through Central Park, clopping along the Magnificent Mile, or walking down Fifth Avenue. To most folks, this seems like a fairly benign business: the carriages aren’t that heavy for a draft horse, the number of passengers is limited, and the horses never go beyond a sedate walk as they proceed on their daily rounds. To the armies of aggressive animal lovers, however, they are the height of animal cruelty and blight on civilization. Why? Because the horses have to work and city streets are noisy and filled with vehicles belching enriched hydrocarbons.

Mara Gay’s Wall Street Journal article, “Cities Move to Rein in Horse Drawn Carriages” and Liz Robbin’s piece in the New York Times, “Who Speaks for the Horses?” summarize the positions on both sides.

The folks at People for Ethical Treatment of Animals (PETA), the Humane Society, and the A.S.P.C.A. have declared the business a disgrace and want to replace the carriages with quaint electric cars. The Coalition to Ban Carriage Horses is leading the charge. NYC Mayor Bill de Blasio and Chicago Alderman Edward Burke have both vowed to ban the carriage business.

Now, I’m a real animal lover and sensitive to any cruelty to the four-legged creatures with whom we share the planet but this sounds like a misguided crusade to me. I know these people mean well, that they think this will improve the animals’ lives, and that it is the right thing to do. I think they’re wearing rose-colored glasses.

Life on the Farm

I remember a summer day over 20 years ago when our family was walking along Central Park South in New York City and our daughter, then about 12, made the same argument. She felt sorry for the poor horses that had to pull these heavy vehicles all day long and wanted to know where the animals came from. I encouraged Simone to speak to one of the drivers and ask him. So she did. The driver explained, very patiently, that these horses came from Amish farms in Pennsylvania where, in their former lives, they had pulled plows, manure spreaders and other farm equipment through hot fields all summer long. Compared to that, he told her, pulling these carriages was easy living.

I’m sure it is. If horses could talk, the Amish farm animals would probably speak of pulling carriages in New York or Chicago the way people in New England talk about retiring to Florida. The industry is well regulated: the horses in NYC get five weeks off a year and they can’t work for more than nine hours in a row, conditions the farmer himself would probably envy. In Salt Lake City, the horses can only work if the temperature is between 10° F and when the heat index is below 104° F—a consideration they certainly don’t get working on the farm. 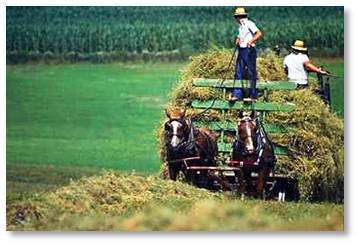 While passions run high on both sides, they may be misplaced. Here are the two main arguments against having horse-drawn carriages in cities:

Care and Safety: A colicky horse died in Salt Lake City and injuries have been reported in other places. These incidents are regrettable, of course, but the carriage horses are well cared for. The Horse and Carriage Association of New York has opened the stable door so critics can see for themselves. Actor Liam Neeson invited Mayor De Blasio on a tour of the stables. The mayor declined to participate, perhaps because he might have been confronted by some inconvenient facts. An independent inspection by a Connecticut veterinarian and horse expert showed all the horses to have a “contented demeanor.” A working horse is a valuable horse. Mistreating one is like owning a truck but not performing regular maintenance and letting the tires go bald.

Any horse pulling a plow today on an Amish farm is working under much harder conditions and for much longer hours than a city carriage horse does. I would like to see PETA and the A.S.P.C.A. explain to Papa Stoltzfuss that this constitutes cruelty to animals and must be stopped immediately. I would buy tickets to that show.

Street Noise and Pollution: Animal rights groups have deemed the New York City streets as too noisy and polluted for horses. Well, police horses work on the same streets and breathe the same fumes. So do service dogs and the packs of coddled pets that get walked every day in big cities—their noses at exhaust-pipe level. No one has a problem with that.

But the question that the outraged animal lovers of PETA and the A.S.P.C.A. do not want to address is this: what happens to these horses if the carriage trade is abolished? NYC’s proposed ban requires the horses to be put out to pasture somewhere or cared for on a rescue farm. But where are those farms and who pays for them? Thanks to the Great Recession, there are already more U.S. horses in need of adoption than there are places to take them. The Daily News tells us that the U.S., “already sends 90,000 to 100,000 unwanted horses to slaughter in Canada and Mexico each year.”

While the Humane society and some individuals have offered to adopt some of the horses, they can’t take all of them. Yet they claim that the remainder will “be all right.” Really? Why is that?

The depth of anthropomorphism that drives the do-gooders is evident in this NYT quote from Edita Birnkrant, the New York director of Friends of Animals, who thinks the horses are in prison. “They are shackled into their carriages, pulling through streets of a chaotic unnatural environment and go back to their cells,” she said. “They need the ability to graze and roam freely. They never get that in New York. They live a life of total confinement, day after day.” Perhaps Ms. Birnkrant should check out the thoroughbred racing industry where horses are exercised for an hour or so a day then returned to their stalls for the remaining 23 hours. That sounds a lot more like prison to me. And thoroughbreds are very well cared for.

The horse owners may love their animals and care for them well but they are running a business not a charity and horses are expensive creatures to maintain. If the owners have to replace the carriages with quaint electric cars, it will cost them $150,000 for each vehicle. Where will that money come from? The horses are working to literally pull their weight, supporting themselves as well as their owners. If they can no longer work and there’s no rescue farm to take them, there are really only two places for them to go. 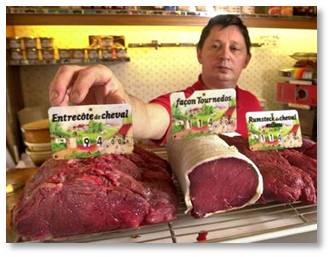 Horsemeat in a Parisian butcher shop

One is into a can of dog food and the other is a Parisian butcher shop.

I’m sure if we were to ask any of these horses which form of retirement they would prefer, they would respond “neigh” to the Alpo option. Ditto le hamburger de cheval. Have the animal lovers considered this unintended consequence fully? Do they think a horse is really better off dead than pulling a carriage through Central Park on a sunny afternoon? Do we have to slaughter the horses to save them?

The real irony, of course, is that many of the well-meaning people fighting to “save the horses” could end up feeding those same animals to their pampered and under-exercised dogs. When one opens a can of Alpo, does that pet owner wonder whether it contains the horse he felt sorry for last week? Would he feel virtuous as he takes his dog out for a walk amid the exhaust fumes of Madison Avenue?

I’m with the carriage drivers on this one. There are a lot of battles worth fighting in the war against cruelty to animals. Horse-drawn carriages are not one of them.