As everyone pretty much knows by now, a massive storm hit the East Coast on Saturday, dumping a lot of snow and flooding coastal areas. The news stations tend to make a big deal out of these storms. To listen to them sling terms like bombogenesis, you would think New England was about to blow away into Canada.

accumulation, while the snow piled up higher the further east you went. Not that anyone who didn’t have to went anywhere. A Saturday storm makes it easy for students and office workers alike to just stay off the roads.

We don’t live in Boston or near the ocean so we got away with a foot to 14 inches of dry white stuff. That’s not a big deal: pretty standard for a January storm.  Only the wind speeds were unusual, but the wind blew the snow off our roof, so we didn’t have to worry about ice dams. On the whole, we had a pretty pleasant snow day. 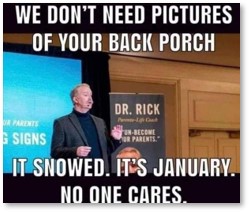 I cooked: waffles and bacon for breakfast, pot roast in the slow cooker for dinner, and a batch of Toll House Cookies in the oven. I’d filled the bird feeder before the storm, so the birds got their meal, too.

Unlike many folks, I saw no need to put photos of the snow in my yard up on social media. It just wasn’t that big a deal.

The Wild Critters Come Out to Play

The day after the storm, I saw a set of animal tracks in the pristine snow. They came over the stone wall from the golf course and down to the retaining wall. There was a big divot in the snow where the critter went over the edge. Then they wandered under the bird feeder where the birds, messy eaters all, spray seeds and corn. After that, they made a beeline over to my neighbor’s and disappeared. Perhaps they went the other way and the critter jumped up the wall to vanish into the golf course. Who knows?

I figure it was a fisher cat because the “track” was really just a plowed groove in the snow. Clearly, the animal was low to the ground and shoving his way through. It could have been the neighborhood fox, but they have longer legs. Or a woodchuck but they tend not to jump up a four-foot wall.

A Party in the Snow

This morning, I looked out to discover that the wild critters had been partying overnight. The ground above the retaining wall was covered with tracks of all kinds, going in many different directions. It looked like they’d been dancing up there. 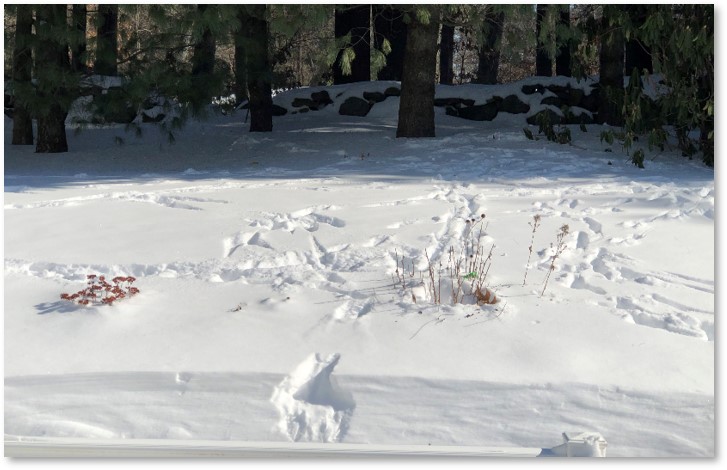 But why? I can understand raiding the bird feeder, but these tracks stayed on the ground above the retaining wall. They looped around and went back and forth. I could just picture the fox and fisher cat chasing one another. Or the golf course coyotes coming across the wall for a midnight celebration of their own.

Here’s a video of all the tracks.

For all I know, they do this all the time, but only leave tracks when there’s snow. Also, the wild critters didn’t make much noise because they didn’t wake us up by cavorting right outside our bedroom window.

When It Warms Up 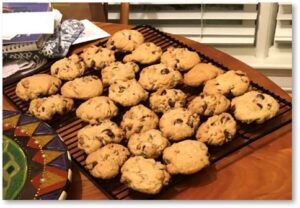 Maybe tomorrow, when it’s not quite so cold, I’ll go back there and try to identify the tracks. But it was 0° when I drove to the pool this morning, so I’m not in a big hurry. I can wait for 27° tomorrow.

When I came home, I dropped a birthday card for our granddaughter in the mailbox and left three cookies for the mail carrier. He usually gets a baggie of whatever I bake.

The forecast shows a chance of more snow on Wednesday. It’s piling up. But it’s January, so that’s just normal.