This is the fourth post in an advent series on Boston’s angels.

The Christmas carol says, “Angels we have heard on high.” Boston’s musical angels play their horns high above the street but are, unfortunately, silent. The Brattle Square angels ornament the four corners of the Italianate campanile, or bell tower, attached to the First Baptist Church in Boston’s Back Bay. Both the church and the frieze on the campanile have interesting stories. 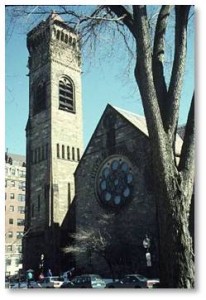 The church itself was designed by Henry Hobson Richardson in 1869 in the Greek cross design. It was his third church and his first important Boston commission, awarded to him by the Brattle Square Unitarian Church. The church’s congregation, which had once included John Hancock and both Presidents Adams as well as governors and chief justices of the Commonwealth, was declining in a neighborhood that had become commercialized.

They hoped that a new building on Boston’s “New Land” would help them to grow. The church opened in 1874 but the congregation’s hopes were not met. They became insolvent and disbanded in the summer of 1875.  The structure remained vacant until 1882 when the First Baptist Church, with roots in Boston that go back to 1665, moved in.

Mr. Richardson designed the Brattle Square Church in the Norman style, accented with the beginnings of the Richardsonian Romanesque style that he later perfected in Trinity Church two blocks away. It’s made of native Roxbury Conglomerate, also called puddingstone, highlighted with alternating blocks of yellow and brown sandstone.

It’s the campanile—more Florentine than either Norman or Romanesque—on which the angels perch. The 176-foot tower stands on four piers connected by four arched openings that form a porte cochère, or carriageway. The top of the bell tower is adorned with a frieze that was designed by Frédérick August Bartholdi, the Alsatian sculptor who would later design the Statue of Liberty. 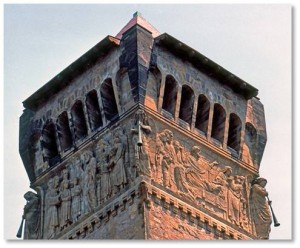 The four sides of the frieze depict the four sacraments: baptism, communion, marriage, and burial. The full-length figures in the massive bas-relief panels bear the faces of famous New Englanders.

Henry Wadsworth Longfellow, Ralph Waldo Emerson and Nathaniel Hawthorne appear in the communion frieze. Charles Sumner is in the baptism panel while Abraham Lincoln and Giuseppe Garabaldi show up in the marriage panel.

The frieze was carved after the stones had been set in place by Italian stone carvers working from two of Bartholdi’s plaster models. The remaining two were lost at sea and the panels had to be cut from the original small sketches.

The Brattle Square Angels of Judgment 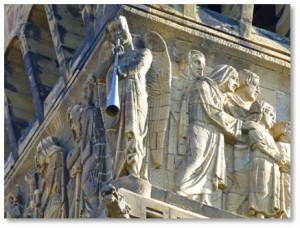 Angel and part of the frieze

On the four corners of the tower stand the Brattle Square angels of judgment. Upon the church’s dedication, the Boston Evening Transcript called them “colossal.” And so they are. Wings folded behind them, the angels blow long trumpets that were originally gilded to gleam in the sunlight. The Art Journal commented on these golden horns in 1878, saying:

“The glitter of these in the sunlight produces a curious effect and seems rather incongruous with the somber tint of the stone.”

In his book, “Architecture of H.H. Richardson and His Times,” Henry-Russell Hitchcock said of the frieze that,

“. . . considering the scale and the distance from which it must always be seen, is equal to that of Rude’s Marseillaise on the Arch of Triumph in Paris. The gilded metal trumpets of the angels  . . . accent the corners of the silhouette against the sky in the most brilliantly picturesque manner conceivable.”

Ordinary Bostonians, who take a particular pride in skewering pretension, called this un-Bostonian gilding by less grandiose terms. They nicknamed Brattle Square the “Church of the Holy Beanblowers.”

The angels—and some of the frieze’s panels—are most easily seen in the winter when the trees on Commonwealth Avenue Mall are bare. For the best perspective, stand on the edge of the mall’s east-bound lane in front of the church on a sunny day. 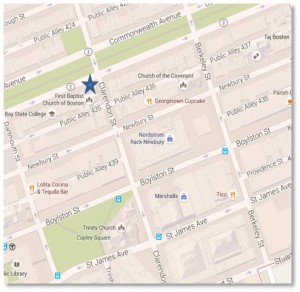 (Actually the best view is from the top floor of 535 Boylston Street. I once attended a meeting there and was surprised by the up-close view of the frieze. These big impressive figures seemed to be standing right next to me. I knew nothing about the Brattle Square Church at the time and thought only that it was an extraordinary piece of sculpture. But you would have to have a reason to go up there.)