I don’t get enough time to read, so when I do, I want the book to be very good. Ideally, I become engrossed, can’t put it down, and don’t want it to end. The book should grab me from the start, pull me in, and refuse to let go until I turn that final page. Lately, I have found that experience rare. So, when I discovered the two books below, I was thrilled.

The synopses come from the publishers via Goodreads.

“Ryland Grace is the sole survivor on a desperate, last-chance mission—and if he fails, humanity and the earth itself will perish. Except that right now, he doesn’t know that. He can’t even remember his own name, let alone the nature of his assignment or how to complete it.

All he knows is that he’s been asleep for a very, very long time. And he’s just been awakened to find himself millions of miles from home, with nothing but two corpses for company.” 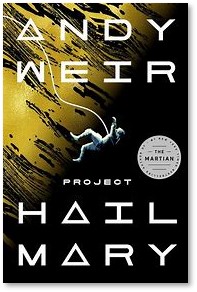 Project Hail Mary is a hard science fiction novel at its best. Like Mr. Weir’s first book, “The Martian,” this one is chock full of science as Ryland Grace figures out what’s going on, what he has to do, and what will happen to Planet Earth if he doesn’t succeed. Then there’s that mysterious blip on the radar screen.

If you had told me I would love a book filled with physics, the law of relativity, cellular biology, solar weather, metallurgy, orbital dynamics and other hard sciences, I would have laughed. But I was hooked from the first page all the way through to the end.

“Martha’s Vineyard, 1898. In her first life, Ida Russell had been a painter. Five years ago, she had confidently walked the halls of Boston’s renowned Museum School, enrolling in art courses that were once deemed “unthinkable” for women to take, and showing a budding talent for watercolors.

But no more. Ida Russell is now Ida Pease, resident of a seaside farm on Vineyard Haven, and wife to Ezra, a once-charming man who has become an inattentive and altogether unreliable husband.” 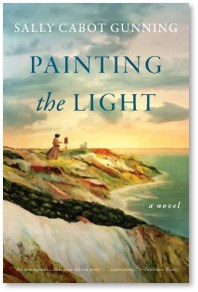 This novel couldn’t be more different from Project Hail Mary—except that I also found it captivating. I read most of it on a snowy Sunday when I had projects planned around the house. But the closet didn’t get cleaned, the cake didn’t get baked, and the next chapter of my own novel didn’t get written.

Instead, I followed Ida Pease on her journey of discovery, challenge, disappointment, and reward. It was wonderful. Plus, I learned a lot about sheep. Oh, and there’s a really big twist.

But Wait, There Are Movies

We recently discovered two wonderful movies to watch at home.

“As a CODA (Child of Deaf Adults) Ruby is the only hearing person in her deaf family. When the family’s fishing business is threatened, Ruby finds herself torn between pursuing her love of music by wanting to go to Berklee College of Music and her fear of abandoning her parents.” 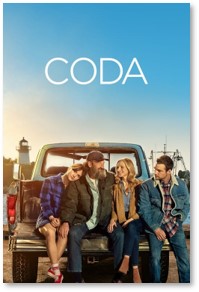 Okay, part of the reason I wanted to watch this movie is that they filmed it in Gloucester, on the North Shore of Massachusetts. But then I got pulled into a wonderful story about a girl whose family needs her almost more than she needs them.

Ruby has reached the age when she wants to break away and find herself by doing what brings her joy and going off to college. At the same time, her deaf family needs her more than ever to translate for them as they branch out in new directions. She’s torn between push and pull, desire and duty, joy and exasperation.

Don’t miss it. You’ll be rooting for Ruby.

“On a post-apocalyptic Earth, a robot, built to protect the life of his creator’s beloved dog learns about life, love, friendship and what it means to be human.” 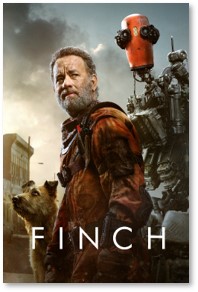 This movie really only has three characters, Tom Hanks’s Finch, his dog, and Caleb Landry Jones, who infuses amazing human expressions into the robot named Jeff. Yes, It’s science fiction. Also a road movie. Also a movie about growth and discovery. The beginning seems a little Mad Max-ish but keep going. You will find yourself in the middle of a wonderful journey out of St. Louis, across America and into the human soul.

Tom Hanks is excellent, as always, while Caleb Landry Jones, whose face you never see, almost upstages him. Imagine that.

And One TV Series 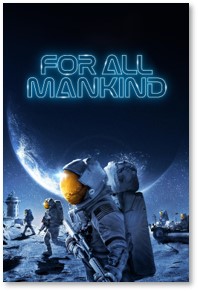 We have only recently had access to Apple+, so we’re discovering movies and series that others have been watching for a while. We just finished the first season of For All Mankind and are looking forward to the second.

“In an alternative version of 1969, the Soviet Union beats the United States to the Moon, and the space race continues on for decades with still grander challenges and goals.”

In this alternate history, the Cold War extends to the moon’s really cold surface, the political landscape is totally changed, the space race doesn’t end, and women make strides unknown to today’s NASA.

Part of the fun lies with the surprising differences, and a bigger part in the increasingly high-stakes deep-space drama. Oh, yes, characters die so you never really know what’s going to happen.

A Lot to Enjoy

Those recommendations should keep you busy for a while. Fans of science fiction will find a lot to like. But there’s plenty of human drama for those who also live firmly tethered to reality. Enjoy!