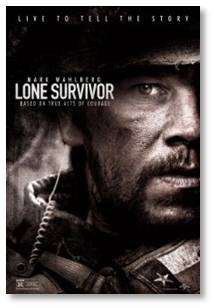 Lone Survivor, based on the book of the same name by Marcus Luttrell and Patrick Robinson, is a gripping movie about how a Navy SEAL team mission went wrong in Afghanistan.

Navy SEALs, along with Delta Force and Army Rangers, are the toughest of the tough. In case you don’t already know that—or have never seen the mis-named and highly underrated 1997 movie G.I. Jane—Lone Survivor sets it up for you by showing a montage of scenes from real SEAL training exercises. Then it introduces the characters and establishes their family lives so we know that the men who died in those rocky hills were real human beings, not comic-book superheroes or Hollywood stars who use stunt men for the rough scenes.

This is all interesting and enjoyable but the movie doesn’t really get started until the mission, code-named Operation Red Wings, takes off. Now, I haven’t read the book so I don’t know how accurate the movie is. Readers have said that the book is better but books usually are. Having come into the theater cold, knowing only what I had seen in the Lone Survivor trailer, I was astonished by one big thing—how the mission was compromised not by the Taliban or the Afghan villagers but by our own military.

I wish that they had named the film Operation Red Wings, however, so as not to give away the ending before the movie even starts. Once you know what’s going to happen, it’s only a matter of when and how, and that knowledge detracts from the dramatic tension. Do you really want to root for a character when you know, before the house lights go down, that he’s not going to make it? 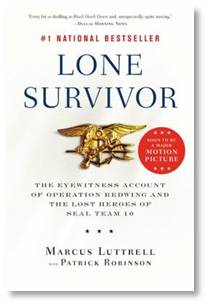 Intel: The intelligence that underlay the mission was faulty and inaccurate. The four SEALs faced not a few Taliban but a small army of fanatical and heavily armed men. Having realized this, the four SEALs decide to abort the mission and regroup, at which point they encounter the second failure.

Coms: The communications equipment doesn’t work due to the rugged terrain so they cannot let the operations center know that (A) There are a lot of Taliban down there; (B) They’re aborting the mission and need exfiltration; and (C) Where they are so the chopper can find them. They decide to wait until night and climb to a higher position where the equipment might work. In the process of waiting, however, they encounter some villagers and face a moral dilemma. Former Special Forces Chaplain Eric Eliason argues that no dilemma should have existed. I certainly support the military’s Rules of Engagement but I know that bad things happen in war and I wasn’t there on that mountainside.

Orders: When Lt. Mike Murphy succeeds by a suicidal act of bravery in getting the message though that the four men are alive and need help, the rescue mission kicks off. Unfortunately, the Apache helicopter gunships needed to accompany the SEAL rescue team have been pulled away and ordered elsewhere. The rescuers, unwilling to let one of their own die for lack of armed escort, sets out anyway. Unfortunately, they don’t have any idea what’s waiting for them in those hills.

The Graveyard of Empires

I left the theater wondering how we could have made such mistakes after 11 years of boots on the ground in Afghanistan. It’s a tough country to be in, to fight in, and to deal with. It has earned its moniker as the Graveyard of Empires over three centuries. Afghanistan—with its rugged country, mountainous terrain, and fierce people—held off the British Empire and defeated the Russian army before any U.S. soldier landed in country. Alexander the Great almost died there and even the fearsome Ghengis Khan had to reach an agreement with the Afghans. 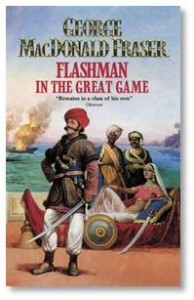 The Foreign Affairs website provides detailed background information: “In the nineteenth century the Khyber became the fulcrum of the Great Game, the contest between the United Kingdom and Russia for control of Central Asia and India.”

Anyone who has ever read Flashman in the Great Game understands that because the book describes it so well. (If you haven’t met Harry Flashman in the books by George McDonald Fraser, you’re missing some great history. Read the footnotes and you’ll learn that history as if you were there—and laughing all the way.)

Or just heed what Rudyard Kipling had to say in “The Young British Soldier” about fighting in Afghanistan:

“When you’re wounded and left on Afghanistan’s plains

And the women come out to cut up what remains

Jest roll to your rifle an’ blow out your brains

The Kindness of Strangers

In the end,Marcus Luttrell is saved by the kindness of strangers who have no use for the Taliban, by sandal-net communications, and by the oldest of technologies: a message written on paper. Thank God some things still work.

Lone Survivor has generated a fair amount of controversy. Some people have called it jingoistic saber rattling that glorifies war. You’ll have to read the book and/or see the movie to make up your own mind.

In the meantime, the movie has grossed $93,914,921 in five weeks on an estimated production budget of $40 million, so the controversy isn’t hurting it. BTW: Mr. Luttrell has two cameo roles in the film.  We enjoyed Lone Survivor and I recommend it to folks who like action movies and can stomach some pretty graphic bloodshed.