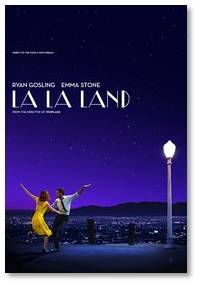 With all the problems that are going on in our country right now it feels inappropriate to write about something as frivolous as movies. But our lives go on and the Academy Awards are coming up so I’m going to weigh in on the film that appears to be the hands-down favorite for the Best Picture Award: La La Land.

Full disclosure: I’m not usually a fan of musicals. I prefer my movies to have more substance. I like to think about—and talk about—the complexities of a film after it’s over. Musicals don’t usually fit that description for me.

The Twinkie and the Nutshell

Everyone—from critics to friends whose opinions I trust—have been raving about La La Land so we went to see it last week. My opinion in a nutshell:

The substance of a movie musical—should it possess any real substance—consists of three things:

The creators hang the Big Three onto a thin cheesecloth plot that ties them together. Most audiences don’t mind that because they don’t come to a musical for plot, dramatic tension, character development, complexity or messages. They come to simply have a good time and leave humming. But the Big Three have to be good — really good — to make a great musical.

Knowing that, I hardly expected Citizen Kane. In the context of a movie musical, however, I found the Big Three—and the movie as a whole—disappointing. Ryan Gosling and Emma Stone make a likable enough couple. There’s friendly chemistry between them, if no real passion, and their characters have some background, motivation, and ambition.

The Big Three, however, leave something to be desired:

You can actually see the difference in the scenes below. On the right, Gene Kelly puts everything he has — passion, skill, energy, extension — into his light-pole move. Ryan Gosling just kind of hangs there. 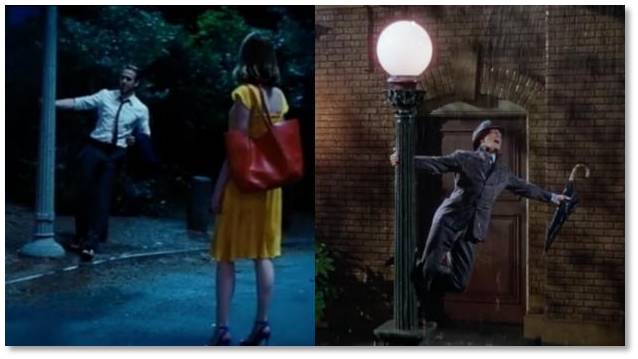 Ryan Gosling is no Gene Kelly

Why Knock a Twinkie?

Ordinarily, I would not have written a post about La La Land. When I called it a Twinkie I meant that it looks yummy on the outside but is bland on the inside and filled with lighter-than-air fake cream. I pretty much forgot about it the minute I walked out of the theater. 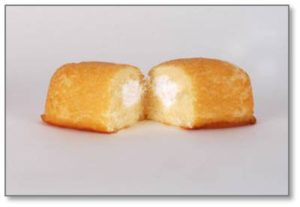 What bothers me, though, is that given its obvious flaws it was even nominated for Best Picture. Because that puts it in contention with movies that are bigger, better, fuller and more meaningful, like Arrival, Fences, Hidden Figures and Manchester by the Sea. Anyone of those movies outclasses La La Land by miles.

What bothers me even more is that it will probably win because, you know, it’s about Hollywood. And Hollywood just looooves movies that polish up “the business” with a fairy-tale shine.

We haven’t seen Hidden Figures or Fences yet but they are on the list. In the meantime, La La Land has grossed $106,693,300 on a production budget of $30 million with a Rotten Tomatoes score of 96% Fresh (but only 86% of audiences Liked it). Did I mention that Hollywood also likes movies that make a lot of money?

So there you have it. I didn’t much enjoy La La Land and I would recommend lots of other movies that are currently playing before I would send you to this one. On Sunday, February 26, though, I’ll be rooting for Arrival when the Best Picture envelope gets opened..