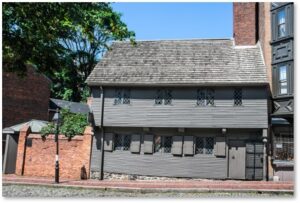 Thanks to Boston’s Puritan heritage, the city’s oldest buildings have few  decorations, architectural or otherwise. The Puritans eschewed most ornaments, particularly images that could be perceived as Catholic, or Papist. Their buildings, which we call Colonial, are actually classified as English Post-Medieval style. The Paul Revere House in North Square is the best example extant in Boston.

The Georgian period that followed focused on classical and symmetrical details. The Federalist period featured buildings that were restrained and simplified. While beautiful and noteworthy, these architectural styles were austere. Architectural decorations did not begin to flower until the 19th century, however.

The Heyday of Architectural Decorations

Native and immigrant artisans alike contributed. Stone and wood carvers, metalworkers, painters, and sculptors came into their own with the Boston Granite style and their skills were in demand until the sixties. The Brutalist concrete style then gained popularity and signaled the end of architectural decorations. Ludwig Mies Van Der Rohe put the final nail in the coffin with his “less is more” approach. It started with Manhattan’s Seagram Building before evolving and transforming into endlessly repeated glass curtain walls.

Europe does architectural decorations far better. The city of Colmar in France, actually has a building called the House of 100 Faces. I didn’t count, but there were a lot. And Bordeaux sports over 3,000 mascarons, or carved masks, throughout the city.

Going Beyond Eagles and Lions

If you look carefully, however, you can find the kinds of sculpted figures and interesting faces that adorn European buildings here and there around Boston. We have lots of noble eagles and rampant lions. Bostonians encounter our favorite bird and beast in varying sizes and media. But if you look, up and search details, you can find other faces, both human and animal. The faces on the façades, so to speak. 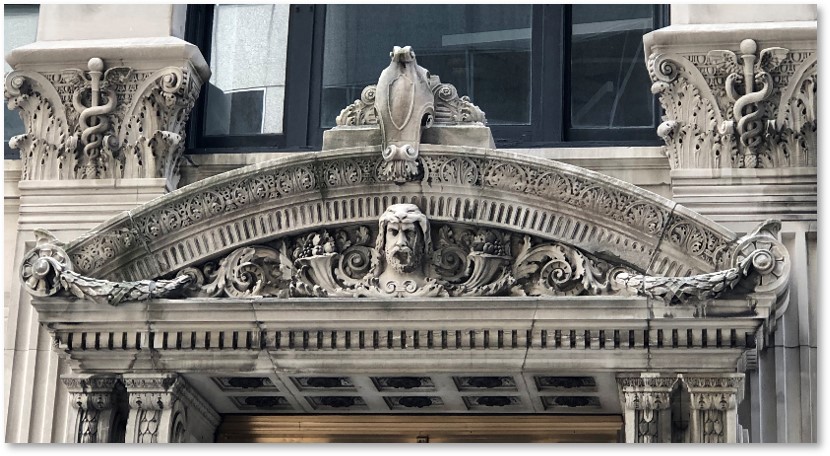 NOTE: This post does not include the faces of statues. That’s another whole subject.

As it turns out, the Financial District and Downtown areas have many fine carvings of faces, medallions, animals, people, and foliage. We can attribute this ubiquitous decoration to the Great Fire of 1872. This blaze destroyed many of Boston’s old post-Medieval structures, clearing the way for new Boston Granite buildings that made full use of ornamentation. Here are a few architectural decorations you can find by walking around the Financial District and Downtown Crossing.

One of my favorite buildings at the corner of Washington and Winter Streets once housed Gilchrist’s Department Store. It has wonderful gargoyles way up high where people never look.

These creatures squat down and leer at oblivious passersby. Although as fearsome as any gothic gargoyle, they do not fulfill a gargoyle’s first function: to act as a downspout. The word gargoyle derives from the Old French word gargouiller, which means to gurgle or bubble. 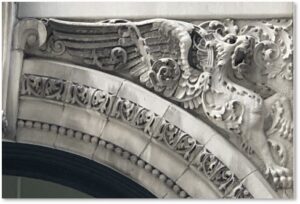 I wrote two years ago about the International Trust Company on Milk Street with its wonderful ornamentation by sculptor Max Bachman. You can read all the details in that post. I couldn’t write about faces on facades, however, without including the head of Hercules (see photo above) and the elaborate, snarling griffins that fill in the spaces above this building’s arched windows.

The International Trust Company building has so many sculptures, including full-length figures, that it’s almost European. 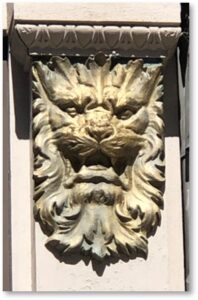 Orthodox Judaism forbids figurative art, so It’s ironic to find these fanciful lion’s heads on pilasters that frame the facade of the Jewish Advocate building on Milk Street.

As I said in my 2020 post on interesting doors, I have not been able to find information on who designed the building, much less who carved these snarling lions. But there they stay, grimacing at the Irish Famine Memorial in the small triangular park across the street. Maybe the lions are looking for their own dinner. 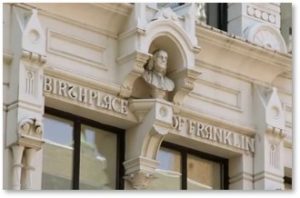 The Downtown area’s most famous resident is, of course, Benjamin Franklin. His bust looks down from the Franklin Building on Milk Street, between Washington and Hawley Streets. It reminds us that he was born right here in Boston. You can ‘t miss it. “Birthplace of Franklin.” 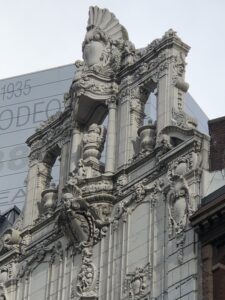 This 1929 structure by Thomas Lamb began life as RKO Keith’s Theater. It wears an elaborate crown of glazed white terracotta that towers 96 feet above the street and rises higher than the surrounding buildings.

This structure includes a plethora of figures, including faces of entertainment characters, urns, masks, sunbursts, and medallions. The whole thing is mounted on a free-standing parapet. Take a minute. Look up: the decorations are worth it. 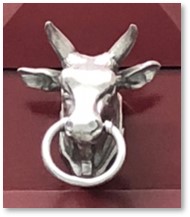 In 2020 I wrote a post about interesting doors around the city and included this one. Although the steer’s head is a doorknocker and not part of the building’s structure, it is an unexpected decoration.

I include it as one of the interesting faces you may encounter downtown. 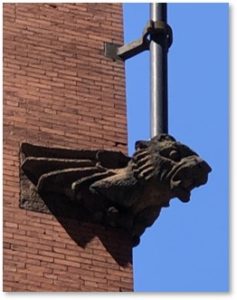 Having started this post with an imaginary, creature, I will end it with another. The Chadwick Lead Works sports several beasts that were never seen in Boston. Dragons carved in granite top the name of the building on High Street. Three bronze dragon heads adorn the pilasters between the fourth and fifth floor.

A fourth dragon, just head and wings, holds up the flagpole.

Full disclosure, I’m not exactly certain about the identity of the carved beast on the corner of the Chadwick Lead Works. I do not, alas, have a big camera with a telephoto lens. I think it’s a griffin:  the chimerical combination of a lion and an eagle.  Perhaps you have better eyes—or a better camera.

Do you have favorite architectural decorations in Boston? If so, let me know and I’ll check them out. Better yet, send pictures!