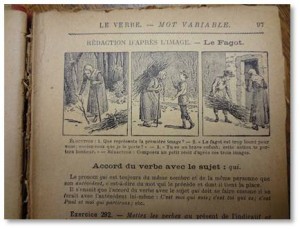 I’m going to say something I never, ever thought I would say: I wish I had my old French grammar book from parochial school.

First, we are going to France and I am trying to “brush up” on my French before we get on the plane.Y

(Yes, I know terrible things are happening in France. Yes, I am concerned. No, we are not canceling the trip.)

When I say “brush up,” however, I really mean start over from the beginning.

My siblings and I all attended St. Louis de France parochial school in Swansea, MA, just over the town line from Somerset. It’s closed now  except for CCD classes and looks much smaller and less authoritative than it ever did when we attended. We were taught by the Sisters of St. Joseph—les Soeurs de St. Joseph—whom I think of as God’s Marines. They were tough and unyielding and believed wholeheartedly in the maxim, “spare the rod and spoil the child.” We said our prayers in French and Latin. We had a French version of the Baltimore Catechism until we, the students, protested that we didn’t know the language well enough to learn our lessons from it and got replacements in English. The choir, for the eight years I sang in it, often sang French songs and Christmas carols.

We had our little French grammar books with all the verbs neatly declined, with vocabulary lessons, sample sentences and reading exercises. We studied that book, recited from it and practiced reading from it. I remember vividly my mother, Marie Boucher, sitting with all four of us in turn, finger moving patiently from word to word as we struggled to learn the language of our ancestors.

But we didn’t succeed. Because voici la chose: No one ever spoke French to us or expected us to reply in French. It was, in fact, the language that my parents spoke when they didn’t want us to understand what they were saying. As in, “Should we get some crème glaceé for dessert?” when they wanted to talk about the neighbors across the street, they would say, “l’autre bord de la rue,” but they ran it all together into “laut bord larue.”  Who knew? I didn’t decrypt that particular phrase until I took high school French.

Studying French was an academic exercise only and I hated it because it was frustrating and seemed old fashioned. Because we never spoke it, learning French seemed to have no purpose. None of us grew up fluent in French, or became even marginally functional. And we were not the only ones. Mes amis were in the same bateau. One of our cousins once complained to me that he had never learned French because no one ever spoke it to him. Duh. It seems only logical that learning conversational French would require, you know, actual conversations.

Today’s kids should be so lucky as to start learning a foreign language this early. The American school system waits far too long, until students are in high school, to start teaching them languages. Kids learn best when they are little and their minds are curious, malleable, and eager to learn.

Which brings me to the second reason I wish I had that darn book so I could do more than parle un peu le Francais. My granddaughters are taking French lessons with a tutor. It will help them if I speak French at least some of the time when we’re together. This will be a challenge along the lines of teaching them to make their beds but, hey, that’s what les grands-mères are for.

Alors, depuis Septembre I have been listening to the Pimsleur Method’s French Level 1 and Level 2 in the car as I drive from place to place. Some people listen to music but I have an audiobook going, Lately, however, I ecoutez and repetez as I conduire la voiture. The Pimsleur lessons are very good and easy to learn. At the start it was a snap. My long-buried vocabulary came back and I found myself responding to the questions with the right words, although not always in the right order.

Getting into Level 2 was somewhat more difficult because the biggest problem for me is the verbs. Past tense, present tense, future tense, the subjunctive. Yuk. And I’m very visual so it helps me to see things as I speak, which I can’t do while driving the car.

I’m also using the Duolingo app on my iPhone. It gives you little quizzes that teach vocabulary quickly and painlessly. @Duolingo makes a game of learning a language and that helps a lot. 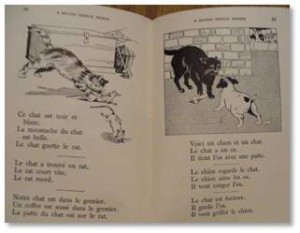 Which brings me back to that little French grammar book. Actually, of course, there were more than one and they grew more difficult with each year of shcool. By today’s standards they were, well, sub-standard. No engaging quizzes or puzzles, no color pictures– black and white illustrations only — and few of those as we grew older.

If I had one of those books again,though, I could be studying those pesky verb tenses. Sure, some were the French version of “Fun with Dick and Jane” (Amusez vous avec Dick and Jane) but it would help me distinguish past tense from future tense. I don’t recall that the grammar book showed anyone having fun but, then, fun wasn’t part of the curriculum with les Soeurs de St. Joseph.

There’s not enough time to become fluent. I know that the French I have regained is far more than most American tourists can or would wish to summon up. And my pronunciation is excellent—living in a French-speaking community did that for me at least, even if my accent skews more to the Québécois than the Parisien. If I give it a good shot, my pronunciation will get me past any stammering over verbs. Somewhere Mom is laughing.

I’ll try to keep you posted when we’re there, although I’m not sure how much time I’ll have for computer things. After all, there will be castles to visit, wine to drink, and truffles to eat in the south followed by trois jours a Paris. That should give me quelque chose to talk about.