Yesterday’s post from Susanne Skinner about meeting a younger self in stiletto heels reminded me of a similar moment many years ago. I was at the old Comnet trade show at the Washington DC Convention Center. While refreshing my makeup in the Ladies Room, I overheard a conversation between two women next to me at the mirror.

One of them was complaining that the men at work didn’t take her seriously as a professional. They kept calling her things like “sweetie” and “honey” and she didn’t like it at all. She wanted them to respect her and she didn’t understand what the problem was. 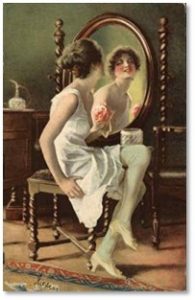 Looking over in the mirror, I checked out her “dress for success” appearance. This is what I saw:

Hmm. She seemed to have missed out on the whole “dress for success” conversation. Given that it occupied virtually every woman’s magazine, several of the general business publications and more than one book, this would have been difficult to do.

The Dress for Success Challenge

Back in the day, dressing for success was far more important than it seems to be now. Women had to wear business suits, hose and heels. But the heels could not be too high. A little jewelry, not too much. Understated makeup. Hair in control. Necklines at medium height. Skirts just above the knee. No men’s ties (They’re a phallic symbol.).

Facing an uphill fight to succeed in a man’s business where men made the rules and the decisions, we tried to look like slightly more feminine versions of men. Go too far in the other direction, and you would suffer by presenting the wrong appearance, one that gave men the wrong idea and led to them making very bad decisions. Here are the 2008 dress rules from Anne Freden, Chairman of Ernst & Young and they are still good advice:: 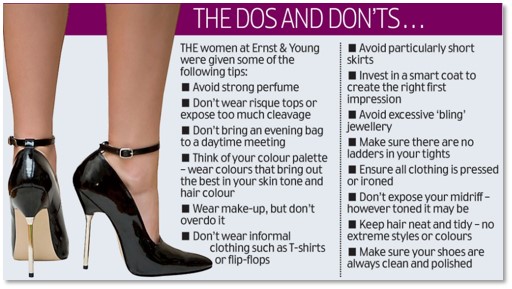 Granted, not much has changed in that regard. Men in the business world still get the wrong idea all the time and it doesn’t take much incentive. But it was even worse and more obvious then. This put women in the difficult situation of trying to look professional, attractive, feminine, intelligent, businesslike, and hard-working, all at the same time, It was a tough balance to achieve.

If you went in the other direction, however, as if you didn’t care about looking attractive or feminine, then the men would attach another name to you. And being tagged as a lesbian meant they would also apply a different kind of discrimination. Hell hath no fury like a man being told his family jewels matter not one whit to a woman.

Here is what I wanted to say to that woman next to me: 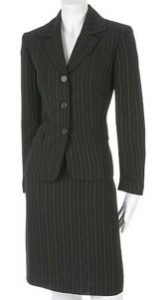 “They don’t treat you as a professional and colleague because you present yourself like a woman who is out clubbing. You put sex right out there front and center. That means everything else about you comes second, third and fourth. Men like a sexy woman but they don’t promote her or take her seriously. They hit on her instead.

“Buy a suit that fits you with a hemline closer to the knee. Wear a blouse that covers most of your chest. Scrub off half your makeup, particularly around the eyes, and take that lipstick down a shade or two. Find a hairstyle that doesn’t require teasing or spraying. Buy shoes that don’t say “fuck me now.” Maybe then the men will see you as a colleague first and an attractive woman second.”

I didn’t say any of this, of course. She was a stranger and no one asked me for my opinion. Besides, commenting on someone else’s personal appearance is very intrusive—a breach of the personal space we maintain around us. Should I have intruded and given that woman some much-needed advice? I don’t think so even now.

Still, I wonder sometimes what happened to her. Did she ever learn the difference between dressing for business and glamming it up for a night out? Did anyone ever tell her what to fix about her appearance and how? Did she run up against a lot of sexual harassment on the job? Did she ever succeed in business?

The @MeToo movement becomes stronger by the week and men who get outed for harassment or assault pay big penalties for their transgressions. Just ask @MarioBattali, recently called a “monster” on a 60 Minutes segment—and fired from his lucrative TV gigs.

Still, men are men and they still make most of the business decisions. They still think men’s behavior is normal for everyone. Many still believe that the women who work for them owe them something or—at the very least—can be manipulated into giving them what they want. Despite the progress women have made, giving men the wrong impression can be dangerous.

Dress for success guidelines may have changed but it never hurts for women to be smart about how we present ourselves. Don’t be like that woman and confuse a sexy look with a professional appearance. If you’re unhappy with the way male colleagues treat you, take a good long look in a mirror and ask yourself what the executive woman standing next to you would say.