Following on the previous two posts about Creativity in Advertising and Creativity in Marketing, Part 2, here’s Part 3: The Engineers.

Because I spent my marketing career in high tech, I encountered many CEOs and Vice Presidents of Marketing who were engineers by education. This was the first generation of engineer-entrepreneurs, the men who made it cool to start a company and make a lot of money. They paved the way for the software nerd entrepreneurs focused on apps who are featured on HBO’s comedy Silicon Valley.

Engineers have distinct personality characteristics. They tend to be curious and inquisitive, focused on solving a problem and resourceful in how they do it. Engineers rely on critical thinking and can be creative in how they come up with solutions to the problem or ideas for new products.

Unencumbered by the MBA cult of number crunching, they come up with new technology ideas and approaches, something no Suit is equipped to do. While they are not typically people oriented, engineers should be able to work well with other members of a team.

They also tend to see the world in binary terms, however: black and white, fact and fiction, good and bad, necessary or unnecessary. In the world of high-tech startups, founders who are engineers put their creativity and innovation into developing products. They tend to view marketing with a skepticism that borders on suspicion. They include Marketing in their organizational mix mostly because the venture capitalists who are funding the new company insist that it’s necessary. Left on their own, I don’t think most engineers would see the need for marketing or would not include it in the company’s functions until it’s almost too late.

The marketing discipline that Engineer executives viewed with the greatest distrust was advertising for five reasons.

Branding, messaging, and unique selling proposition were terms the Engineer execs understood in concept and paid lip service to in theory but just didn’t get when it came to execution.  The phrase “perception is reality” had no real meaning for them. Reality was reality. In their minds, a thing was what it was and it did what it did. All you really had to do was tell the prospect what the product did and how it worked. The customer would immediately grasp the benefits to him and write a check. Easy peasy.

It doesn’t work that way, of course but that didn’t stop the Engineers from deploying this approach in their marketing. Advertising was only the most obvious way in which it rolled out. Their preferred approach was to bludgeon the reader with features, speeds and feeds. That is why high tech print ads tended to look like data sheets illustrated with a “product shot” that was as exciting as a black box. Well, it was a black box. With every review of the “creative concept” they would add another feature. For emphasis, they would put the relevant words in bold type. And add color. There, that’ll do it.

The battles I fought with Engineer executives—with varying degrees of success—included these topics:

And those are just what comes immediately to mind. Here is an example of one of those battles:

I don’t want to pick on NetScout Systems but I remember vividly a conversion I had with an Engineer founder one Good Friday evening. Almost everyone else had left for the Easter weekend and I was wrapping things up when he came into my office.  He demanded to know what the ROI would be on the corporate identity advertising campaign that had just rolled out in the technical publications. We had been though this information already, in detail, but he opened up the issue again.

I explained, once again, the purpose of the campaign: that it was not intended to generate leads, that we would be monitoring the various mechanisms that existed to measure awareness over time and that we would be reporting on the results, etc. He had heard it all before but went over the same issues and concerns while the office around us grew quieter and quieter. Finally he asked the number of the publication’s subscribers. I told him and he demanded—demanded—that we receive 10% of that number in leads. He not only wanted a 10% return on his investment, he wanted it immediately. That simply wasn’t going to happen. I knew it and he knew it. Exasperated, I explained, again, how it would all work. He remained unsatisfied.  Finally, I picked up my things and just left. 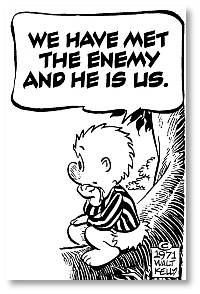 I could write many other examples. I have lost track of the background work, proposals, presentations, budgets, schedules, arguments, revisions, disagreements, and occasional fights that I got into while attempting to get an Engineer-type Marketing VP or CEO to understand the need for creativity or approve an innovative concept. Or maybe I’d rather forget. There were many times when I felt like my biggest problem wasn’t the competing companies, the general market ignorance, or “the way we’ve always done it.” It was my own Engineer management team fighting marketing creativity (and expenses) every step of the way. After all, I couldn’t address the first three until I got past the management obstacle.

A lot of high tech companies stopped doing print or broadcast advertising after the dotcom bubble burst. The behemoths like Cisco, Microsoft, Apple and IBM had deeper pockets and kept on going. They also knew better. Since then a few tech companies have rediscovered the value of advertising and started doing it again. I don’t read the technical magazines any more so I don’t know if the creative work has gotten any better. If you’re in technology marketing, what do you think?

I miss the challenges and the occasional rewards that I found in my career but not the frustration and aggravation. I would like to think that things have changed in the two years since I left the fray but, really, we all know they haven’t. Perhaps the new generation of software nerd founders will take a different approach.

I doubt it, but I can still hope.

Tomorrow: If Not Them, Who?