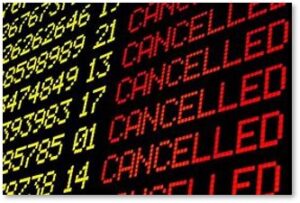 World travel has slowed because of poor planning by the airline industry. Airlines appear to have reached full meltdown mode just as people are traveling again and the summer vacation season is upon us. Flights are canceled or delayed, leaving people stranded in jam-packed airports. Planes sit on the runway for hours, ticket prices have gone up, and few people can get where they want to go.

To me, this speaks of a confugelty of events. (Yes, I know that is not a word, but it should be.)

The airline companies failed to plan for the long haul. During the pandemic, management offered buyouts to employees, furloughed pilots, and laid off staff. This saved money during the crisis but left them short of the staff they needed in the long run.

Some of the workers the airlines sloughed off found other jobs and stayed there, retired, died of Covid-19, or lost their childcare support. Others declined to return to a job that locks them in steel tube with passengers who insult, hit or spit at them. Such passengers present a danger to themselves and everyone on the plane. Plus, pilots can’t just walk back into the cockpit. They must be retrained and re-certified, which takes time.

Basically, the airline industry shut down during the pandemic because travel fell off a cliff. Instead of planning for a gradual post-pandemic resumption, however, airline management kept their companies running on empty for as long as possible. This makes sense during a crisis. By not creating a strategy for ramping business back up again, though, they risked demand exceeding supply much more quickly than they could respond. That brought us exactly where the world’s travelers are right now.

The Air France Flight Out

But that doesn’t explain everything that’s going on. We got caught up in this confusion early on. In April we tried to get home from Amsterdam after a Viking River Cruise. Everything had been fine on the cruise; all the problems came on both ends of the airline experience. 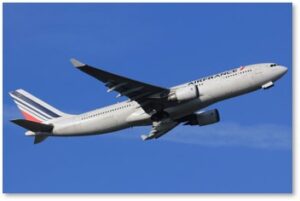 Flying to Europe, Air France,  jammed us into a trans-Atlantic Airbus 333 that was, like every flight today, packed from end to end. My husband sat next to a squirming toddler whose flailing feet and arms made his trip a misery. The boy’s father, despite a polite request from my husband, made no effort to keep his son from annoying a fellow passenger.

At Charles de Gaulle Airport, we transferred to a smaller jet for the flight to Zurich by walking through an open jetway in the rain. Then we sat in the plane for an hour listening to a sound like enormous gears grinding. It reminded me of ancient machinery opening the doors of the Temple of Doom. This did not build confidence. 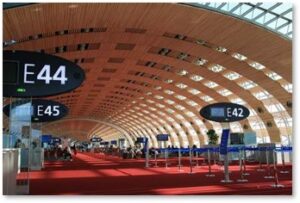 Turns out the crew was trying to get the hydraulic system to work. Fortunately for us, they eventually gave up and moved us to another flight. This entailed walking back through the rain into the concourse and then to another gate. There, we waited for an additional hour. Why? Because they had the equipment and they had the crew but they lacked a bus to move us all out to CDG’s North Forty where the plane was parked.

When, finally, the bus arrived, we drove out to the plane, parked, and ran across the tarmac—still in the rain—to board it. Once we were in the air, my husband joked that Air France should give us a free glass of champagne as compensation. The flight attendant rolled her eyes, gave us an “as if” laugh, and handed us our packet of cookies.

That describes the trip over. Coming back was worse.

For our Sunday morning flight back on Delta Airlines, we arrived hours early at Amsterdam’s Schiphol Airport. The taxi dropped us at the Departures terminal but the doors were blocked.

Schiphol was, and it seems still is, a hot mess.  All departing passengers were herded into a line that ran alongside that terminal and the next terminal as well in a cold morning wind. Once inside the second terminal, the line snaked back to its starting point, then wound through the departure terminal in a complex maze. 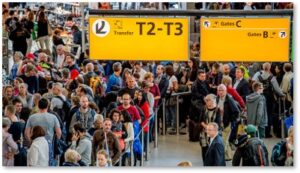 We stood in line for so long, our flight was called for boarding. Now, I used to travel on business and this was not my first experience with airport lines and problems. But in the U.S., the airlines usually have people walking along the line and pulling out people whose flights are imminent or boarding.

Such efficiency did not occur to Schiphol’s administrators. One woman with this unfortunate job tried to move us up the line so we could make our flight. The Floor Manager, whoever he was, denied the request. So, we waited though a line that seemed endless for two hours until we reached the ticketing agent.

NOTE: We could not get a boarding pass from a kiosk because passengers entering the U.S. had to show letters certifying that they are Covid-free to a live human being.

The ticketing agent told us that she could not help us because our flight had already left. We would, she said, have to go to the reticketing desk. That area was, of course, backed up with a mob of desperate people.

We left and took a taxi back to the hotel. There, my husband got on the phone to reticket on the next day’s flight. This involved long waits and being cut off at least once. The next day’s flight was already full but, after at least an hour of trying, he got us booked on the Tuesday flight.

This meant we had two additional days in Amsterdam. While not a terrible outcome, it meant paying for another two nights at the hotel, meals, and another trip to the airport.

On Tuesday, we repeated the Schiphol experience, again arriving hours early with a fresh set of Covid test results in hand. This time the Departure Terminal was open but still crowded. The lines were shorter, although they still snaked through the floorspace.

We presented our Covid letters and got our tickets. Then we waited in the security line before gaining access to the gate. Even then, we sat at the gate for over an hour because the flight home was delayed.

When we finally boarded the plane, I greeted the flight attendant and said, “Boy, am I glad to see you!” 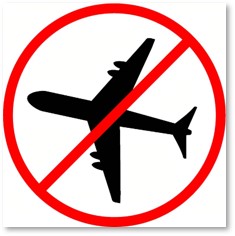 If offer this advice for this summer: don’t fly if you don’t have to. Yes, gas costs an arm and a leg but driving means you can start when you want to and deal with things along the road. You can also take a train or a bus. American trains do not approach the smooth, clean, efficient transportation mechanisms they are in Europe, but you’re less likely to have your trip delayed or canceled.

You may well decide, of course, to stay home until all this airline mess gets fixed. I know, it’s not optimal. But, take my word for it, you’re better off not spending time you haven’t planned on or budgeted for because the airline industry messed up.

NOTE: Our AAA travel agent told us that flight insurance covers problems like the ones we encountered in Amsterdam. She submitted our receipts and the insurers have approved reimbursing us for our surprise expenses.