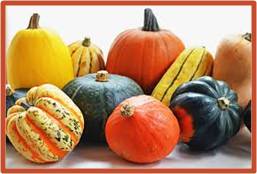 The heat is on, the leaves have fallen, and the clocks have been turned back.  It is dark when I drive home and the air smells like fall.  Here in New England we are in that quiet time between chilly mornings and get the heavy coat out.

The summer garden has also been laid to rest, heading into that long stretch of slumber known as winter.  But not before the winter squash crop has been harvested and displayed in all its glory at our local farm stands.  Here is a guide to their names and flavors along with some recipes to introduce winter squash into your cooking repertoire.

Winter squash will not win any beauty contests.  It has a hard and knobby exterior, comes in weird shapes and sizes, and does not look too promising from the outside.  The beauty of winter squash lies on the inside.  Once it’s cooked, it’s full of sweetness – nutty and buttery and delicious.  The addition of sea salt, brown sugar, and even cinnamon creates a wonderful main or side dish and lends itself to soups and salads for wonderful autumn fare.

They are also good for you.  The health benefits hidden inside these beauties include potassium, beta-carotene, and antioxidants.  Create a colorful fall basket of squash to celebrate the season.  Admire them, cook them, eat them.

Squash serves as a healthier alternative to most starches, and each kind has its own texture and flavor.  There are as many varieties as there are ways to bake, roast, sauté, and puree them; the possibilities are endless.  Squash offers a neutral canvas for just about any seasoning you can imagine.

My favorite way to cook a squash is roasting because there is no tough skin to peel or hyperextended wrist action called upon to remove the seeds.  You’ll still need some muscle if you’re going to cut them in half – especially the larger ones – as they roast better that way. Save the seeds – they make great snacks when they are cleaned and roasted with seasonings in a low heat oven. 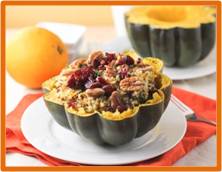 Acorn squash is so versatile it acts as its own serving bowl.  Scoop out the inside, mix in your favorite things, then pile it back in. Don’t be afraid to add other varieties of squash, carrots or parsnips.   Ancient grains, brown rice, quinoa and couscous are lovely additions, along with dried fruits and nuts.  There are no rules.  The result is layers of flavor and a feast for the eyes.

Squash is the new potato.  It has a summer and a winter season.  Summer squash appears in its yellow and green finery throughout July and August but as soon as we roll into October it’s all about the winter squash.

There is a surprising flavor and simplicity to these humble vegetables.  They offer up a variety of impressive side dishes, and for the vegetarians and vegans among us there is a hearty main meal in a winter squash. 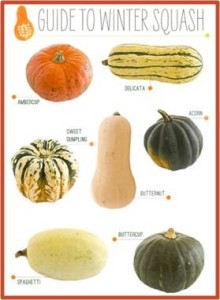 The most well-known among these is the pumpkin – most often put on display or found in a pie during Halloween and Thanksgiving.  Fresh pumpkin is just as easy as the canned variety – cook it in the oven until it’s soft and proceed with your recipe.  Sugar pumpkins give the best flavor.  Here is one of my favorite soup recipes; a good way to use up those display pumpkins in the table centerpiece.

It also makes delicious bread, but if you’re up for something just a bit different, replace that pumpkin with butternut squash and you will be pleasantly surprised.

The new kid on the block is the spaghetti squash.  Like its name implies, the long strands of squash resemble noodles.  I’ve found the best addition to any spaghetti squash recipe is garlic.  The squash itself is bland, and loves to be seasoned.  It can also be served as a pasta substitute, but serve the sauce as a side, or the dish becomes mushy.

The delicata squash has an edible skin.  Roasting it with onions and rosemary and the addition of some sweetness from maple syrup or brown sugar is a nice change from rice or mashed potatoes.

Blue Hubbard is the old man in the group – originating in South American and claiming to be over 4,000 years old.  It can grow up to 40 pounds and is often cut with an ax and sold in chunks that taste good with butter and brown sugar but this recipe adds apples and walnuts.  There is a baby blue variety that is much smaller,

Kabocha squash is pumpkins Asian cousin.  It has dark orange flesh that tastes like a cross between a sweet potato and a pumpkin.  It is used widely in Japan and Korea, where it is fried into tempura.  It stands up well to spicy flavors like the ones in Thai Red Curry with Kabocha Squash.

Winter squash is one of the richest sources of plant based anti-inflammatory nutrients like omega 3s and beta-carotene, which are important for a strong immune system. They also contain a good amount of vitamin C (about one-third of the daily requirement per cup) and a very good amount of the antioxidant mineral manganese.

Winter squash are at their best from October to November so pick some up and discover what you’ve been missing.