Last week I saw a cartoon that had been posted on LinkedIn about business executives and creativity. I commented on it and several people joined in to agree with me.  Here’s the cartoon: 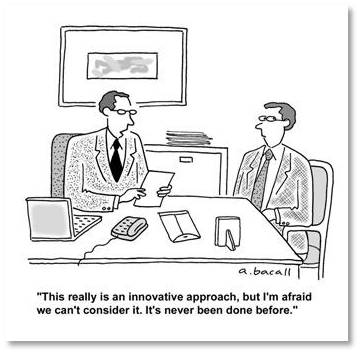 What makes this cartoon funny is that it’s so true.

One of the first things I learned as a corporate advertising manager was that a visceral negative reaction from the client (that was me and my VP) indicated how creative the concept was. If a client liked the ad concept immediately, that meant the agency creative team hadn’t gone far enough. The client liked it precisely because it felt comfortable, acceptable, familiar. And it felt that way because we had already seen the concept before in someone else’s advertisement. A truly innovative concept, on the other hand, would often elicit a negative reaction precisely because it was unusual, different, unlike anything ever seen before. In a word: creative. Creative advertising is edgy, challenging, and often unsettling.

In LinkedIn, Lori Philo-Cook commented, “You are spot on! For example, in my world of bank marketing, when will banks see that producing ads of suited bankers all lined up in a row is not productive? If you look like every other bank, you are like every other bank, so why should I do business with you? But, on a positive note, there is an opportunity for those who are willing to be creative and different!”

But being willing to take a creative risk and having the courage to defend it to a management team that sees safety as the highest good are two different things.  Many a brilliant concept has been lost to both lack of vision and lack of courage.

On the Cutting Room Floor

I remember doing an agency review for a small private company that wanted some new juice, excitement, and creative impact in its ads. We spoke with a Boston agency that had an excellent reputation and a good track record along with many awards but the portfolio they showed us was merely OK. Meh. The advertising campaigns were well thought-out, very well written and professionally executed but they lacked oomph. They just kind of sat there and did not generate an ounce of excitement from any of us on the review committee. When I asked the agency if these were the best ads they had to show us, the creative team responded candidly that they were not. Their best work had ended up on the cutting room floor, axed by client executives who could not summon the imagination or the chutzpah to take a big original leap. Instead they opted for something comfortable and familiar, trading innovation for safety.

The agency’s creative team was only too happy to show us some of the ad concepts that had never seen the light of day and those ads were terrific: edgy, exciting, unusual, different. In a word: creative.

If the CEO and CFO can be risk averse and uncreative by nature, the VP of Marketing should counter that with the fire and drive of originality. I spent my career in high tech so I can’t speak for other industries, but I butted heads with a cautious, conservative VP of Marketing on more than one occasion and in more than one company. These men said they wanted creativity but they were either (1) clueless and perplexed or (2) turned white with fear when they actually saw some. They knew that running these campaigns and programs past the CEO was going to cause conflict and they wanted nothing to do with that. As Lori said, there was opportunity in the creativity—a chance to score big in the market and make a name for ourselves. But there was also risk that the campaign wouldn’t work out and they would catch flak for the failure. It was so much easier to just go with something safe and conventional than to risk criticism of any kind.

As Dawn Gadless of eMagine, a highly creative web agency, pointed out on LinkedIn, “So true! 9 out of 10 times ‘something safe’ wins out.”

After a while, I divided these vice presidents into two camps: the suits and the engineers. They each had their own characteristics, strengths and weaknesses, which I will address this week. Tomorrow I’m going to talk about the Suits.

Until then, I just want to point out that fear of criticism for taking a big creative leap is, IMHO, the biggest obstacle to truly creative marketing in high tech. Safe and cautious never gets you to true creativity. It also never gets you to “insanely great,” whether in product development, branding, or advertising.

Steve Jobs knew creative genius when Jay Chiat showed him Apple’s iconic “Big Brother” ad and he didn’t hesitate to run with it. I did not encounter many Marketing VPs — or CEOs — in high tech, who possessed that much conviction — or that much courage.