My Day Lilies in Bloom

Inch by inch, row by row, someone bless these seeds I sow

Someone warm them from below ‘til the rain come tumbling down.”

Sometimes being a perennial gardener is a lot like being a member of Red Sox Nation.  You buy a new plant or get an outtake from a neighbor’s garden and put it in exactly the right place. You water it and fertilize it but after that it’s wait until next year. A nursery plant will probably do alright; otherwise it’s a sacrifice fly. The new addition may put out a few blooms during its first summer in a new location but typically the plant will be spend that time gathering its energy, putting down roots and getting ready to survive the winter. It won’t achieve its glorious best until the following summer. 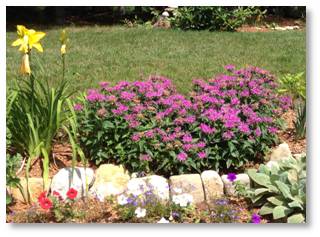 Of course, unforeseen things happen along the way.  This year I moved a small coral bells to a better location and a wild turkey immediately used the spot for a dust bath, pretty much demolishing it.  A hosta I put in a shady place near a rhododendron is still weak and puny in its second year, even though other annuals and perennials are thriving nearby.

The lavender plants that bloomed so beautifully last year died in the cold blasts of last winter. Only one of three phlox survived and I’m not sure why. The bee balm is gorgeous but shorter than last year and the yarrow that was so prolific last summer has few blooms now. Go figure.

In our old house I had more borders and gardens that I (eventually) could or wanted to maintain. The pleasure drained out of gardening and it became a chore—like housework but outside. Here I started with a smaller patch and expanded it a little this summer. It’s easier to stay on top of the weeds, deadhead the blooms that have gone by, pick off the Japanese beetles, and fertilize on a regular basis.  Gardening is back to being fun again. 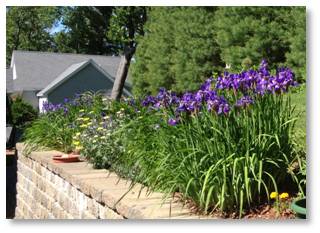 To get to this point, of course, I had to invest a lot of sweat equity last summer, which was hot and dry. I hoicked out things planted by the previous owner like creeping euonymus and Siberian iris.  In my opinion, the former has no place among perennials and the latter, while gorgeous for a brief period in the spring, is invasive. There was so much Siberian iris, it was pushing out everything else.

My husband and I dug and pried and pulled and hauled until we got each giant clump out of the ground. I hate to throw out growing things but, really, nobody wanted this stuff and a lot of it got pitched. When it was gone, everything else gathered itself, took a deep breath, and said, “Now we can grow again.” Last summer I planted way too many day lilies from Bob Seawright’s now-closed garden because I would never have the chance to get such a variety of shapes, sizes and colors again. This year they are spectacular.

Give a Little, Get a Lot

Last year I planted some hybrid lilies along a stone wall near my old house as a parting gift to Sudbury. A few days ago I drove by and they are blooming beautifully. Someone had mowed carefully around them.  A neighbor is putting flowers in a town cemetery near where a relative is buried. Several years ago the Landscape Committee at my church dedicated plants and time to the grounds of a Habitat for Humanity house that was going up. Look around and see if there’s a place or an organization that will appreciate your gift. 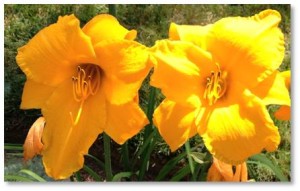 Gardening also teaches you to smell the roses—even if you don’t have any. It gets you out of your chair and away from a screen. In the garden, you spend hours breathing fresh air, watching the birds and insects, getting your hands dirty, nurturing something outside of yourself. You may come back in tired, dirty, and scratching a few mosquito bites but that’s a small price to pay for what the garden gives back to you.

“So plant your rows straight and long, temper them with prayer and song

Old crow watching hungrily from his perch in yonder tree

In my garden I’m as free as that feathered thief up there.”

The Garden Song by David Mallett