“War is cruelty. There is no use trying to reform it. The crueler it is, the sooner it will be over.” — William Tecumseh Sherman.”

“It will end, soon. But before it does, a lot more people have to die.” — Wardaddy 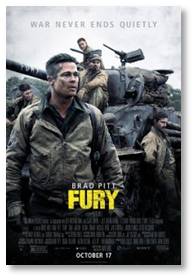 Anyone who ever wondered how soldiers get post-traumatic stress disorder (PTSD) or why soldiers are described as having a “thousand-yard stare” should see this movie.  Fury is a war movie that focuses on the impact to soldiers of unremitting violence, cruelty, savagery, and the fear of instant death.  It has all the more impact because the story takes place at the end of World War II, when the German forces had lost but before they surrendered. No one wants to be the last man to die in a war that might be over by tomorrow.

@FuryMovie is not a film about the “glory” or the “nobility” of war. It’s only sort of a classic action war movie and/or a buddy movie. It’s a film about a family of sorts, the crew of a Sherman tank named Fury, who has been fighting together since North Africa. They are buddies because they depend on one another to survive another minute, another hour, another day. And because experience tells them their trust is well placed — until a replacement gunner with no combat experience arrives.

Brad Pitt’s character, Sgt. Don “Wardaddy” Collier, has managed to keep his men alive so far and his goal is for them all to make it through until the Nazis surrender.  To get there, the crew of Fury has to do whatever needs to be done. At this point in WWII, the Nazis were putting civilians in uniform and hanging any women and children who refused to fight.  Thus staying alive meant shooting anyone who was trying to kill you, even if it was “just a kid.”  This is a situation familiar to our soldiers who have fought in the Middle East against an enemy that is often indistinguishable from the civilian population.

War the Way It Really Was

Writer-director David Ayer wanted to depict World War II the way it really was and he did a lot of research to ensure that historical accuracy. The actors saw the pictures so they would know that the scenes they were playing were not war porn, carnage fed to a passive audience to gin up their emotions and patriotism. The violence is the more shocking because it is random, instantaneous, ordinary—and relentless. Think the D-Day invasion of Normandy as Steven Spielberg depicted it in Saving Private Ryan but without the relief of the battle ending so the rest of the movie could begin. In Fury, there is no rest of the movie. 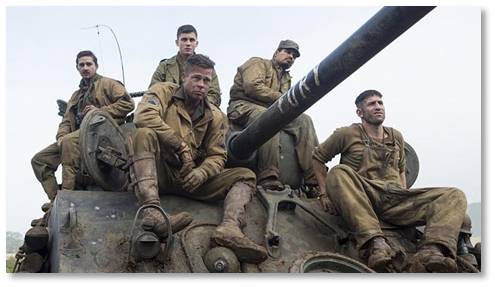 The war-weary crew of Fury

But the brutality is not gratuitous. Mr. Ayer documented the conditions under which his characters would have fought and put it right out there for us to see. This is the war the way our soldiers fought it. If we don’t like it, if we’re repelled by that truth, it’s because most of us are fortunate enough to have never been involved in war.  Also, we have been conditioned by a lot of patriotic movies that focus on glory and heroism while shying away from what carnage really looks like. I’m sure if we could have smelled the battlefields of Fury, the experience would have been even more shocking.

There is heroism in Fury, but it’s not the kind that charges up the hill or rides into the barrels of enemy cannons for the glory of God and country. It’s the heroism of men who have been given a mission and have to overcome their innate and carefully honed desire to survive if they are to complete it.  You don’t expect soldiers who have been rendered psychotic by the endless ravages of war to behave heroically—which gives their actions even more weight. 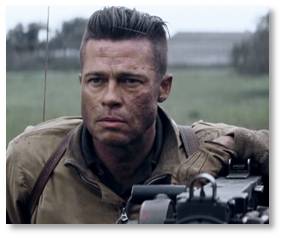 Wardaddy Collier with the thousand-yard stare

Did I like the movie? That’s not really the right question. I walked out of Fury feeling the same way I did after Braveheart or Saving Private Ryan. I didn’t just  watch #FuryMovie, I experienced it and I have been thinking about it ever since. Having seen the images, I can’t unsee them but I would rather know what war really is than have a glorified version of it warping my thinking.  I hope a lot of our Congresspeople see Fury. As Sherman famously said, “I am tired and sick of war. Its glory is all moonshine. It is only those who have neither fired a shot nor heard the shrieks and groans of the wounded who cry aloud for blood, for vengeance, for desolation. War is hell.”

If you are squeamish or have a weak stomach, I can’t recommend Fury. But if you want to see a solid, impactful movie about the last days of World War II, Fury is the movie to see.