The greatest pleasure of a dog is that you may make a fool of yourself with him, and not only will he not scold you, but he will make a fool of himself, too.
~ Samuel Butler

Owning a dog is a special kind of joy; they teach you about life and in the process they love you into a better person. A dog knows how to live in the now. I work hard at doing this but dogs have it nailed. They get up every morning knowing the day will be a good one. A little barking, some running around, and then a nap followed by a cookie and perhaps just a little more barking. We laugh and call it a dog’s life but it’s nice work if you can get it. 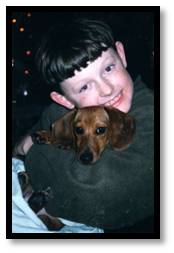 A dog is family. We wrap our lives around them and they become a part of us. The loss of these beloved companions is a hard thing to go through and there is no skirting around it. You are left with a dog-shaped hole in your heart. I knew this day would come but was unprepared when it arrived. The oldest of our three dachshunds enjoyed a long and happy life with us and last week the family that loved him for sixteen years felt their hearts beginning to break.

This dog had lots of humans who loved him and one very special boy who chose him from a litter of eight-week-old puppies; or more accurately, the dog chose him. We visited the breeder after much pleading for a boy dog and the promise “to take care of him and love him like my brother.” Six puppies were presented, five of them female. The runt of the litter and only male crawled out of the basket and curled up in the boy’s lap. He had a beautiful face and the softest ears of any dog I’ve known. The boy said “I want this one Mommy – I pick him.”

He named him Chance (from Homeward Bound) Thomas (his middle name) Thunderbolt (his Indian spirit name) and he joined our family when he was 10 weeks old. Hard-earned allowance was given up for some toys, a brush, and a box of dog treats, along with one of his very own baby blankets. After six weeks of obedience training there was no doubt who was in charge. The boy mastered the dog; the dog captured his master’s heart.

He was an only dog back then—two more eventually joined the family—and his human child lived up to his promise to care for him. They supported each other through multiple time outs, the move to a new town and yard, a herniated disc (the dog) a torn ACL (the boy) six years of high school, four years of college and a few broken hearts along the way. They even shared birthdays since the dog and the boy were a day apart. There were barbecues, family reunions, graduations, celebrations and a lot of hanging out together. There were other siblings who loved him, but the dog’s heart belonged to the boy.

The dog and the boy took care of each other. The boy shared secrets known only to the dog and the dog kept them safe. The years passed. The boy grew into a young man and the day came when it was time for him to leave. The dog was content to remain behind. He waited patiently for visits he knew would come and continued his reign over the land.

Humans have a tendency to complicate things. Dogs keep it simple. You always know where you stand with a dog; they let you know how they feel and love you unconditionally and unapologetically. They hold no grudges and their loyalty is unquestioning. We should strive to be more like our dogs.

Dogs have confidence. Sometimes it’s misplaced, but it never hinders the persistence required to obtain the thing they most want. An invitation to join you on the sofa, a piece of that leftover chicken, or socks with the words ‘chew me’ written on them—all pursued with equal determination. To a dog, failure is not an option.

Contentment is something dogs know a lot about. Chance was the King of his Yard and all he surveyed. A day spent outdoors in the sunshine was one of his favorite pastimes. It took us a while to figure out this approach to living but once we understood its value we joined him. Dogs understand the importance of doing nothing and doing it with gusto. He taught us well. 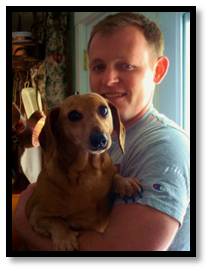 Dogs make you more human. No one on earth will love you more, forgive you so readily or greet you with such boundless enthusiasm. A dog wags his tail with his heart.

A dog is a great communicator; he speaks with his eyes as well as his dog voice. Dog communication is genuine – no pretense or hidden meaning. We always understood each other and he knew how much he was loved. The years passed.

The day came when it was time for the dog to leave. He knew it and told me with his eyes. I knew it too, and answered him with my heart. He did not want to leave us but his body said it was time to go. I like to think an Indian spirit guide walked with him as he crossed the rainbow bridge.

He was our forever friend; a beloved member of our family. He was a mighty fine dog.