Growing up in small town Somerset, Massachusetts, I used to see diners and luncheonettes with signs that said, “Coney Island Hot Dogs.” This puzzled me. All hot dogs tasted pretty much the same to me. Weiners were about five inches long, pale pink, made of beef and pork, were soft to bite and bland on the tongue. You could boil them, fry them or grill them but the taste wouldn’t change.

I didn’t know it then but signs like those appeared — and still do — all over the country. Clearly Coney Island had some special caché in the wiener department but I could not imagine what that was.

After I got married we moved to Brooklyn and one Saturday night in the summer we went to Coney Island. “You have to taste a Nathan’s Famous hot dog,” my husband said. Having been to many a family cookout in New England, he knew well what “hot dog” meant up here. So we got on the D train and headed south to the famous beach and boardwalk. I would finally learn the secret of Coney Island hot dogs.

Once there we made a beeline to Nathan’s Famous, the Tiffany’s of hot dog stands, the standard by which all other hot dogs should be judged, and the reason why “Coney Island hot dogs” get promoted elsewhere in the country. 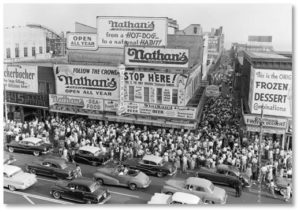 On the sidewalk we joined a large crowd surrounded the restaurant at the corner of Stillwell and Surf Avenues, smelling the heady aroma of grilling frankfurters and fresh fries. We waited our turn, placed our order, and then went off to eat.

Picking up my hot dog I noticed that it looked different: it was long and red and substantial. I took my first bite and had a culinary epiphany. Instead of being met by a soft pink tube, my teeth bit into a casing with substance. Hot, salty, spicy juices burst into my mouth. The taste was amazing. I could have added sauerkraut, ketchup, mustard or relish but, really, the taste of the hot dog itself was worth the trip.

(Eventually I tried mustard and sauerkraut but never ketchup. To me, putting ketchup on a hot dog is like putting sugar on eggs or broccoli on pizza. Yuk.) 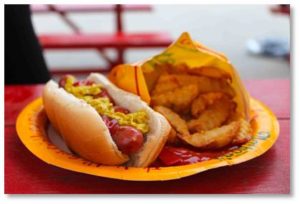 From then on I was hooked. Only pure beef hot dogs would do. Nathan’s understood this, of course, and not only because Founder Nathan Handwerker was Jewish and pork is trayf. Adding pork would have kept Jews from becoming customers—in New York City. That would have been a meshugenah thing to do.

Now, of course, the same culinary rule applies to Muslims, who are probably learning to enjoy a pilgrimage to Nathan’s.

Nathan’s has since opened franchises in other places, including food courts at shopping malls. Those outlets could not possibly match what it’s like to eat one at Coney Island, however. The complete experience includes the smell of hundreds of dogs and pounds of fries cooking at once along with the salt tang of the ocean, and popcorn and cotton candy from the midway. You eat your meal listening to the calls of midway barkers, waves coming into the beach, the elevated D train roaring periodically along Surf Avenue, and the screams of riders on The Cyclone roller coaster. The Nathan’s Famous experience comes as a package deal.

Just writing that makes me want to drive down to Coney Island—and I really hate going to New York City. But my personal culinary rules changed a few years back. I no longer eat meats cured with sodium nitrite and that, unfortunately, includes Nathan’s hot dogs. Sodium nitrate metabolizes as nitrosamine in the gut, which is a carcinogen. That’s why studies show a higher rate of cancer among people who eat a lot of “red meat and processed meat.” What a pity. 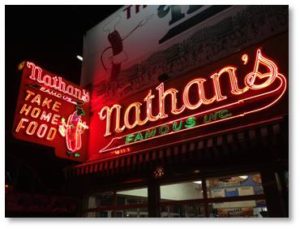 If you want to know more about Nathan’s Famous, though, you can pick up two new books written by cousins who are Nathan Handwerker’s grandsons.

Or you can just read the review of both books, “America’s Top Dog,” by Edward Kosner in The Wall Street Journal. Both informative and entertaining, the review is written by a man who clearly knows his subject.

The memory of a Nathan’s dog led me to break my no-nitrites rule a couple of months ago when we were in Worcester. George’s Coney Island Hot Dogs, famous in its own right, makes a destination for people who are seeking the Nathan’s experience in New England. This out-of-the-way and somewhat seedy place has been around for 100 years — the same time as Nathan’s — and has a reputation for serving great dogs. It’s been written up favorably in a variety of food articles, including the Boston Globe, the Phantom Gourmet, and chowhound.com.

Some of the best food comes from what the Food Network calls “Diners, Drive-in and Dives,” so I was not put off by the worn 1950s ambiance. I ordered a regular dog and a chili dog so I could taste George’s much-lauded chili sauce, and sat down to eat. Unfortunately the wieners on my plate bore no resemblance to any hot dog served at Nathan’s Famous, ever. They were ordinary Kayem wieners: short, pale pink, soft and pretty much tasteless. They just lay there on the plate and when I bit into one there was no snap, no crunch, no wonderful burst of salt and spice. Anyone who has eaten these pallid imitations and thought they were getting authentic Coney Island hot dogs was sadly deceived. One can only imagine that the people writing those glowing reviews never made the trek to Nathan’s Famous to taste the real thing.

Oh, well. One can’t have everything. But the next time I’m in New York I’m going to head to Coney Island and break my rule once again—only this time with the authentic Coney Island hot dog at Nathan’s Famous.