There comes a time in one’s career when interviewing for a job, that it’s not so much about you as it is about them.

As a technology communications professional, I pride myself on picking up non-verbal cues to get a vibe on an organization. Dilbert cartoons, for example, are an effective early warning system. If the place has no Dilbert cartoons on the cubicle walls or every Dilbert cartoon, the place IS a Dilbert cartoon and one to be avoided. At Gradient Technologies (now defunct) in Marlborough, Mass., the Dilbert ratio was promising indeed.

I’m a firm believer in fit. In the few jobs I took purely for the money, I was unhappy. In the jobs I choose for the fit, I was delighted. 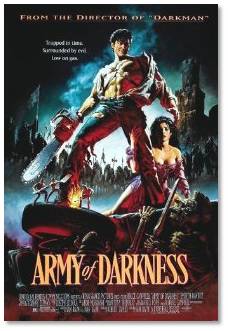 This is the poster Dan saw in my office

At Gradient, I was recruited heavily for a public relations job with this security start-up by an old friend who was obviously greasing the skids for me. Every interview with senior management went better than I hoped and it came down to one final interview with the person I’d have the most interaction with day-to-day as a peer.

I walked into Aline Kaplan’s office and, after meeting her gaze and shaking her hand, I looked behind her to a large framed movie poster of Bruce Campbell as “Ash” in “Army of Darkness.” It’s one of my favorite movies; a film so bad, it’s amazing.

I handed Aline my portfolio and said, “This is my boomstick.” And she laughed.

The connection was immediate, and, so was the friendship. Aline remains one of the best business partners I’ve ever had. One of the things I always admire about her was her honesty. After moving to California, I saw her in Vegas at an Interop show. I had packed on some weight and she said something about it. I had gastric bypass about six months later and its one of the best things I ever did for myself.

I attended a Comikaze show in Los Angeles in early November; it’s an event a little smaller than ComicCon in San Diego but it’s growing in popularity. And wouldn’t’ you know it, Bruce Campbell was there. I paid $50 for 10 seconds of his time and a professionally taken photo of him and me with my son. I brought a DVD of one of his movies which made him smile.

The Fan Who Was Hired 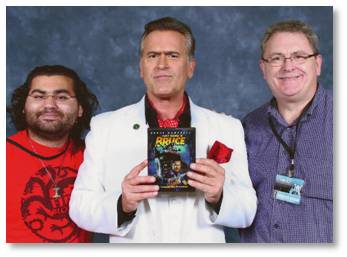 We had 10 seconds and I said, “Nice to meet you Mr. Campbell. I actually got hired once because I’m a fan of ‘Army of Darkness.’”

“I brought my boomstick,” I told him.

He chuckled and then we posed for the shot; he was in character but I wasn’t. I was thinking that Aline should be here now too.

I wish I had been there with Dan. Since Army of Darkness (Theme: “Trapped in time. Surrounded by evil. Low on gas.”) I have enjoyed watching Bruce Campbell as Sam Axe in the TV series Burn Notice. I should mention that the poster Dan saw in my office at Gradient was the framed movie one sheet—which is enormous.  It had belonged to my son and I appropriated it.

In Army of Darkness,a sequel to the Evil Dead films, a discount-store employee (“Name’s Ash. Housewares.”) is time-warped to a medieval castle beset by monstrous forces. Although mistaken for an enemy, he is soon revealed as the prophesied savior who can search for the Necronomicon, a book which can dispel the evil. Unfortunately, he messes up the magic words while collecting the tome, and releases an army of skeletons, led by his own Deadite counterpart. What follows is a thrilling, yet tongue-in-cheek battle between Ash’s 20th Century tactics and the minions of darkness.  Ash describes his gun to the folks  In 1300 A.D., as a boomstick.

When I spoke to Dan about his weight at InteropI was not being critical; I wanted to hire him to do PR for the company I was with at the time. But my new boss had made several unfunny “jokes” about fat people and I knew that he would not take Dan seriously as a professional because of his weight. I’m delighted that Dan heard my comment as it was meant and acted on it. I also enjoy reading his Facebook posts about the day’s boot-camp training exercise. Way to go, Dan!