Today is the anniversary of the day Jackie Robinson integrated baseball by taking the field for the Brooklyn Dodgers. This is the day that every player in the major leagues honor that achievement by wearing Robinson’s number, 42, the only number to have been retired by all of baseball. This year we commemorated the day by going to see 42, the biopic about Jackie Robinson, which opened on Friday. Prior to its opening, critics worried that it would not have enough “cross-over” power—which means that not enough white people would want to see it–to make a profit. The producers estimated that it would only take in $20 million for the first weekend. Now the weekend numbers have been totaled and I’m happy to report that 42 came in on top with a gross of $27,250,000.

We liked the movie and I think that anyone who enjoys baseball, US history, one man’s triumph over adversity, and how strength of character can overcome hatred will also enjoy it. The movie is well acted and well paced with excellent cinematography and editing. Critics quibbled about whether Harrison Ford’s performance as Branch Rickey was over the top but I have never seen or heard the real Branch Rickey so I’m not in a position to judge. 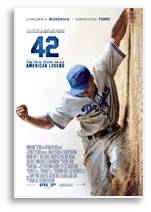 One other thing that 42 does very well is show both the breadth and the depth of racism in America at the time.  This is important because other films have glossed over it or, like The Master, copped out by pretending that it didn’t exist. This is a luxury that 42 did not have, of course, because race hatred is at the core of the story. It’s the villain of the tale, as embodied by the vitriolic manager of the Philadelphia Phillies, Ben Chapman. His in-your-face baiting of Jackie Robinson is repulsive but historically accurate and true to the times.

Racism was alive, strong, and pervasive in America in the Forties, Fifties, and well into the Sixties. People used all the pejorative words, and not just for black people. Many of the folks who used those words and held those attitudes did not consider themselves racists. They had simply been raised to believe that there was a social hierarchy and everyone knew (or should know) their place in that structure. Jokes were jokes and if you felt insulted, well, you just didn’t have a sense of humor.

Pretty much everyone now grasps the unfairness and injustice of these attitudes and how they played out in society. There were quotas for Jews and insults for Italians and pretty much any other non-Anglo Saxon immigrant. Blacks were banned from jobs, hotels, restaurants and bathrooms.What racism also did, however, was to institutionalize mediocrity. It was, in essence a form of affirmative action for white Christian men, who had a lock on all the best opportunities. No one else need apply. To earn a spot on the roster of a major league team, you didn’t have to be the best hitter in the minors or the best pitcher in baseball.  You only had to be the best white hitter, the best white pitcher. Racism shrank the competitive pool to a small entitled group of candidates—no white man left behind.

Players in white baseball didn’t have to worry about competing with the likes of Buck Leonard, Josh Gibson, James (Cool Papa) Bell, or LeRoy (Satchell) Paige. The Yankees and the Red Sox didn’t fight the Kansas City Monarchs, the Birmingham Black Barons, or the Pittsburgh Crawfords to win the Pennant. It’s a good thing for them that they didn’t, because the Negro League players were very good:  tough, scrappy, aggressive and driven.

From the 1920s through the 1940s exhibition games were played between squads of “all-stars” from both leagues. Wins and losses in these games between Negro League squads and major leaguers were split fairly evenly, which demonstrates that the levels of competition were relatively equal.

Re-Envisioning the Baseball Hall of Fame

I wonder what the Baseball Hall of Fame would look like today if the “color line” had never existed in baseball. While many Negro League players have since been admitted, would some of the most revered white names in the sport would still have a place of honor in Cooperstown. Would others even have played the game at all? BTW: The role of Ben Chapman in 42 is played by Alan Tudyk, better known to science fiction fans as Hoban “Wash” Washburne, pilot of the ship Serenity on the TV series Firefly.  Ironically, Wash is married to a black woman, Zoe Washburne, played by the beautiful Gina Torres. Of playing Ben Chapman, Mr. Tudyk said,

“It ended up being hours and hours of screaming that stuff. It was awful.  It would put me in the worst mood. You would have to be in this palace of anger and hate, and just living there.”