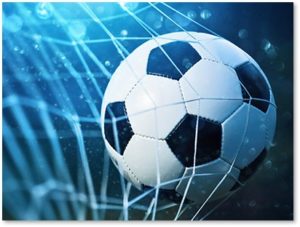 This blog post is dedicated to all the men who have mansplained over the years about why women athletes make less money—going all the way back to Billie Jean King. Those men have lectured me at great length on how women:

To them I say: “Explain the pay gap for the U.S. Women’s National Soccer Team.

US Women’s Soccer: Tops on the Field

So why don’t they make as much money as the men—who didn’t even qualify for the 2019 World Cup? This image from cc.com/equal pay says it all.

Finally, finally, after years of men gaslighting women with their explanations of why men are superior athletes, we see statistics that can’t be ignored. As for not getting as much attention, well, here are some more statistics: 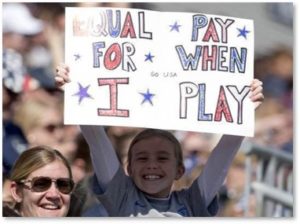 As for attention, I can say this. We happened to be in Lyon, France, when the American women played the French women. Male passengers on our Viking Longship made a point of walking to sports bars where they could watch the game.

There can be no more naked example of gender discrimination when it comes to salary and bonuses. Because we all know the one reason for the disparity: men run the US Soccer Federation.

An Unbalanced Board of Directors …

Here are the members of the Board of Directors for the U.S. Soccer Federation:

But wait, you say, four of these 12 directors are women. Sure. But four women does not make a majority. And, as any woman who has ever attended a business meeting can tell you, eight men can easily ignore and outvote four women.

The discrimination is so blatant, so glaring, that even a United State Senator has been moved to act. Considering that the Senate is currently as torpid as a Louisiana swamp in August, that’s saying something! 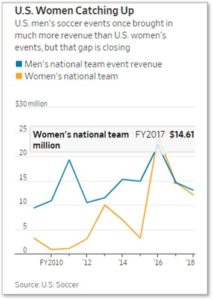 Breitbart Sports (Is that even a thing?) claims that the disparity is economic and they go all the way back to 2010 numbers to prove their point. The Wall Street Journal takes a more contemporary view, demonstrating that those numbers changed in 2016.

The WSJ uses accredited financial statements from US Soccer to show that, “From 2016 to 2018, women’s games generated about $50.8 million in revenue compared with $49.9 million for the men.”

There you have it. The world of sports is changing. Will the U.S. Soccer Federation keep up?

Senator Joe Manchin (D-WV) has emerged from Foggy Bottom’s sleepy depths to introduce a bill that would withhold federal funding for the 2026 men’s World Cup, to be jointly hosted by the US, Canada and Mexico, until the men’s and women’s national teams are paid equally by the US Soccer Federation. That includes funds that would go to host cities, participating local and state organizations, U.S. Soccer, the Confederation of North, Central American and Caribbean Association Football, and the international soccer governing body FIFA.

Good on you, mate! I can’t think of anything better than making the male players feel some of the pain.

Will this initiative go anywhere? I sure hope so. After all, it gives our politicians the opportunity to stand behind a bill with popular support and no political downside. That’s always a winner.

And One More Thing

In the meantime, people can think about one more thing. Any major league team that uses the failure of its players to justify paying them less can kiss a league championship goodbye. A reputation as the lowest-paying team in the country won’t get you the top players—or even the medium-level athletes. To win big, you have to get the best and pay for them. 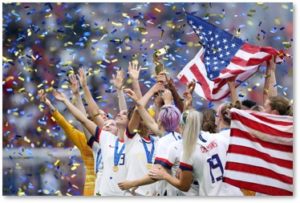 US Soccer could have looked at the women’s team as a bright future for their sport in this country and invested in its success. They could have backed it with increased pay and bonuses as well as improved promotion and support. Instead they chose to stick with the old, outmoded approach to get world-class talent for minor-league wages.

In addition, they have denied their rising stars equal playing, training and travel conditions. They have also tried to skew the numbers by promoting the women’s games less. Instead of boosting the final match to improve viewership and advertising revenue, they scheduled two other men’s tournaments on the same day. It was a blatant attempt to distract viewers from the women’s game.

And they have gotten away with this behavior simply because those players are women.In response, 28 members of the world-champion U.S. Women’s Soccer Team have filed a gender discrimination lawsuit against the US Soccer Federation. I really, really hope they win.

It’s way past time for a change.