Sound permeates religious literature and scientific inquiry into creation: how the universe, as we understand the concept, came to be. Sound also constitutes the most intimate aspect of meditation, during which we delve inside to see the light. I was reminded of this when I re-read an article by Eknath Easwaran in an old newsletter from the Nilgiri Press, the publishing arm of the Blue Mountain Center of Meditation. 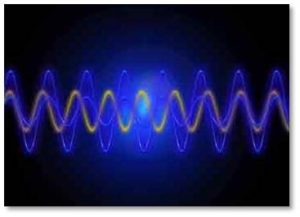 In the article, entitled, “The Mystery of the Mantram,” Mr. Easwaran writes about the function of the personal mantra one uses for meditation: With much practice, the sound of the mantra permeates one’s being and soul, bringing one into vibrational unity (my phrase) with the universe. He touches on the theory of vibration discussed in The Rig Veda: “According to this theory, from the Great Silence there issued the Creative Word. ‘In the beginning was Brahman, with whom was the Word; and the Word was truly the supreme Brahman’.”

He explains that shabda, or sound, “. . . is the subtle stuff out of which the phenomenal world has emanated, and every object in it may, therefore, be looked upon as sound of a particular concentration.” Mr. Easwaran extends this concept as he explains how “the world of nama (name) and rupa (form) is shade or sound manifesting itself at varying levels of vibration.” To me, this appears to be a reference to the theory of language formation which posits that words came about as people made oral noises that, to them, “named” or described the sound and/or function of the object they wanted to describe; e.g., bees buzzing. I think this is related to another aspect of language, common today, in which the name becomes the object itself; e.g., Kleenex, Xerox, etc. We say such words are eponymous.

In the Beginning Was the Word

Referring to how another religious tradition, Islam, uses the power of the Word to invoke Reality, Mr. Easwaran recounts an anecdote:  “ . . . all the hundred and twenty-four thousand prophets were sent to preach one word. They bade the people say Allah and devote themselves to Him . . . . those who heard it with their souls imprinted it on their souls and repeated it until it penetrated their hearts and souls, and their whole beings became this word . . . Having understood the spiritual meaning of this word, they became so absorbed in it that they were no more conscious of their own non-existence.” 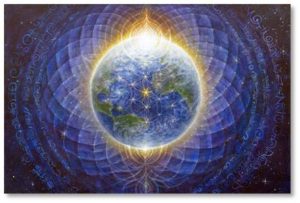 Perhaps this phrasing struck a memory chord within you. Mr. Easwaran recalls the opening words of the Gospel of John:  “In the beginning was the Word, and the Word was with God, and the Word was God.” The sound of the Word became one with God.

For those of you familiar with the works of J.R.R. Tolkien, this passage taken from The Silmarillion may be familiar:

“Then Iluvatar said to them: ‘Of the theme that I have declared to you, I will now that ye make in harmony together a Great Music. And since I have kindled you with the Flame Imperishable, ye shall show forth your powers in adorning this theme, each with his own thoughts and devices, if he will. But I will sit and hearken, and be glad that through you great beauty has been wakened into song.’

“Then the voices of the Ainur, like unto harps and lutes, and pipes and trumpets, and viols and organs, and like unto countless choirs singing with words, began to fashion the theme of Iluvatar to a great music; and a sound arose of endless interchanging melodies woven in harmony that passed beyond hearing into the depths and into the heights, and the places of the dwelling of Iluvatar were filled to overflowing, and the music and the echo of the music went out into the Void, and it was not void (emphasis mine).”

Look into other spiritual traditions, and take note of the role sound plays in the Creation stories. That is the big picture. Individually, though, we are each engaged in the process of creation of ourselves.

Mr. Easwaran builds upon this thought when he notes that,

“The repetition of the holy name or mantra . . . can bring us lasting benefits on the physical, mental, and spiritual levels. But, unlike secular disciplines, as the mantra sinks into the deeper levels of consciousness, a wave of joy begins to rise up from the sea of joy that is the Atman. After years of patient practice, we come to hear the mantra in our dreams, in our sleep, in the song of the nightingale or the murmur of the brook that babbles by.” 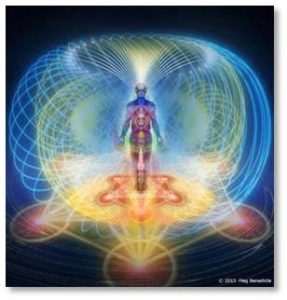 He concludes his article by citing a late medieval spiritual observer, Meister Eckhart:  “Whoever has God in mind, simply and solely God, in all things, such a man carries God with him into all his works and into all places, and God alone does all his works . . . He becomes one with God in every thought.”

I mentioned science at the beginning of this post. Its relationship to the topic of sound and the universe is bound up in the life work of physicists, astronomers, mathematicians, cosmologists, and all the other disciplines  that seek a definitive answer to what they all refer to as The Big Bang.