The Berkeley Building stands out among its granite, brick and sandstone neighbors in the Back Bay. This gleaming Beaux Arts confection shines in an area marked by darker and more sedate buildings. Located at the corner of Boylston and Berkeley Streets, it flies the flags on its two masts with the confidence and grace of a structure that matters.

Designed by Codman and Despradelle 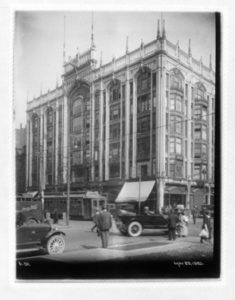 Built in 1905, the Berkeley Building was designed by the firm of Stephen Codman and Constant Désiré-Despradelle (1862-1912). Mr. Despradelle taught the Beaux Arts style as a noted Professor of Design at MIT from 1893 until his early death at home in Boston. He was only 50 years old.

At the time, the Massachusetts Institute of Technology was located in the Rogers Building diagonally across the street from the Berkeley Building.

Like many nineteenth-century artists and architects, Mr. Despradelle studied at the Ecole des Beaux Arts in Paris. The award-winning architect taught many notable studentsand himself designed the Peter Bent Brigham Hospital 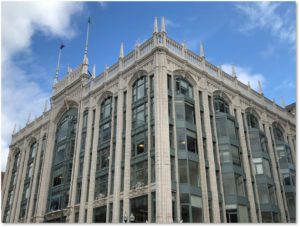 The Berkeley Building is a five-story, steel-frame masonry building with an exterior of glazed terra-cotta, copper and glass. The large central arch above the main door pulls together two narrow lateral bays and the five bay windows projecting on the Berkeley Street elevation. Two tall flag posts rise on the roof. Fish, seaweed, and shell motifs decorate the exterior.

This commercial building has survived in far better condition than the row houses that stretch to the east along Boylston Street. Those not demolished suffered the ugly commercial construction that marred many buildings in the twentieth century.

It was renovated by Finegold Alexander in 1989. Lacking the original construction drawings, they used archive photos and an architectural rendering to recreate the original design. The firm restored the Art Nouveau storefronts—the only ones in the Back Bay—from a 1906 watercolor rendering by Ms. Despradelle. Finegold Alexander also replaced the original balustrade crown, which had disappeared–another victim of poor maintenance or cost cutting.

The result is a beautiful building restored to its former glory from the days when decoration mattered and minimalist architecture hadn’t been invented.

The Berkeley Building lacks a storied history in terms of its tenants. No famous men walked its halls, no murders marred its shining white façade, no ghosts haunt its shadows. In fact, the most famous occupant never really existed. Spenser, Robert Parker’s fictional private detective (now written by Ace Atkins) uses the view of the Back Bay from his office in the Berkeley Building to comment on the Boylston Street pedestrians and the weather.

The next time you walk past the Berkeley Building, I urge you to walk under the gilded marble nameplate and step through the polished bronze doors with their lyrical curlicues. Enter the lobby and you will face a curving cantilevered staircase, replica wallpaper, beautifully restored woodwork and octagonal Art Deco lighting fixtures. 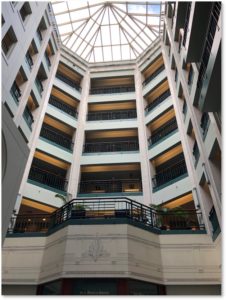 Beyond the lobby rises a six-story atrium capped by a skylight. It replaces and encloses the original structure’s exterior light well. This is one of Boston’s interesting—but tucked away—interior spaces. From the sidewalk you would never know it’s there.

The Boston Landmarks Commission rated the Berkeley Building “of major significance” when it granted Landmark status. Its shining white façade raises my spirits every time I walk past and I love to see the flags snapping in the wind, particularly when they appear against a blue October sky.