Last week I blogged about Seven Ways to Become a Writer. Today I’m happy to announce that an anthology containing one of my short stories is now out and available for purchase. Magical: An Anthology of Fantasy, Fairy Tales, and Other Magical Fiction for Adults, edited by Kelly Ann Jacobson, lists stories from 31 authors around the world in its table of contents. 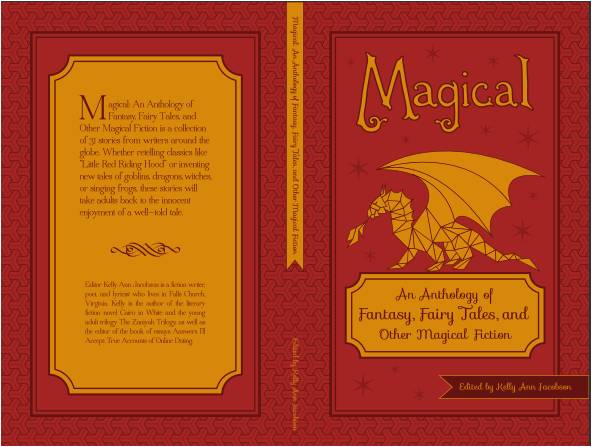 “Whether retelling classics like ‘Little Red Riding Hood’ or inventing new tales of goblins, dragons, witches, or singing frogs, these stories will take adults back to the innocent enjoyment of a well-told tale.”

Editor Kelly Ann Jacobson is a fiction writer, poet, and lyricist who lives in Falls Church, Virginia. @KAnnJacobson is the author of the literary fiction novel Cairo in White and the young adult series The Zaniyah Trilogy, as well as the editor of the book of essays Answers I’ll Accept: True Accounts of Online Dating.

A Visit to Elf Hill

I’m thrilled to have one of my stories included in this anthology and to be part of such an outstanding group of authors. The stories between these red covers promise hours of enjoyment for adults who enjoy good fantasy. My story is called “Elf Hill” and it tells the tale of a woodcutter who comes upon strange and magical beings while on his way home. During his encounter he discovers that these creatures are definitely not what they appear to be and that Elf Hill is no country for ordinary men. Here’s how it begins:

“Harno hefted his axe and moved cautiously up the hill as dusk crept through Eythorne Wood. The forest was silent. Creatures that should have been settling with May evening twitters and calls were instead hiding from a brilliant light no fire had made. Felling the blasted oak had taken longer than Harno had planned, delaying his journey home, but the bright white light ahead held darkness at bay and stopped his tired feet. Something terrible had come to the valley between him and the village.

“Slowly, carefully, he peered around the bole of a big chestnut tree, squinting against the glare and struggling to make sense of what he saw. The little valley with its quiet stream was filled by what could only be the Elf Hill of his granny’s tales. Its slopes arched from the grass to form a low dome, smooth and shiny as ice. Fear seized his heart as tightly as his hand gripped the axe. Elf Hill, looking just as Old Maurin’s stories had described it, lay between him and the village. Harno did not know why it had appeared in this wood or what the elves wanted here. He knew only that he had to get home to protect Luciann and their new babe.”

To find out what happens next, you can purchase Magical: An Anthology of Fantasy, Fairy Tales, and Other Magical Fiction for Adults at your local bookstore or online at:

Magical: An Anthology of Fantasy, Fairy Tales, and Other Magical Fiction for Adults will make a terrific present for anyone on your Christmas list who likes stories of magic, fantasy, and science fiction. Even if you are a confirmed mundane, you probably know someone who enjoys pushing the boundaries of the real world. And if you buy the book from Createspace, you can help children with cystic fibrosis at the same time.

Should you live locally, I’ll be happy to personalize your gift by signing the book. I live in Massachusetts but I will be attending the book party in Bethesda MD on December 5 and will be in the Washington, D.C. metro area that weekend. Just let me know if you’d like to meet and I’ll come with pen in hand. Also, please feel free to forward this post to friends and family: I really want to help make this book a success so more will follow.