I have written in the past about attending church and parochial school at St. Louis de France parish in Swansea, MA. It occurred to me while I was in France last month that no one—not the nuns or the parish priest—told us anything about who St. Louis de France was and why he became a saint.

Despite that lack of information, St. Louis has popped up periodically in my life in places far from Massachusetts, including Rome, Bordeaux and Paris.

The painting that used to hang on the right of the sacristy at St. Louis de France in Swansea showed a frail boy in a wheel chair giving alms to a beggar in the snow. I spent a lot of time looking at that painting and for me it created the image of a king who was an invalid or a cripple, a king who perhaps died young.

The historical facts, as is often the case, differ quite a bit. An innovator, King Louis IX  of France actually modernized old established ways of doing things. In addition to being a pious Catholic, he was a king, a commander of armies, a leader of two Crusades, and a father of many children. 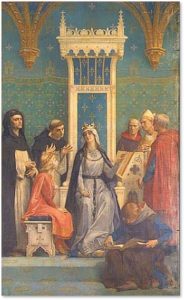 Louis IX was Capetian king of France from 1226 to 1270. Born at Poissy on April 25, 1214, he was the fourth child (and the only one to reach adulthood) of King Louis VIII of France and Queen Blanche of Castile.

Louis Capet became king of France at the age of 12 when he was crowned three weeks after his father’s death from dysentery. His mother served as Regent of France until 1234. At 19, King Louis married Marguerite of Provence, with whom he had six daughters and five sons.

In 1244, King Louis IX fell ill with “a fierce malady,” most likely a form of malaria. That might explain the wheelchair in the painting. He was, however, not a boy but a grown man of 29 at the time.

He led the Seventh Crusade to the Holy Land in 1248-50. Although his army lost and he was taken hostage, King Louis negotiated a 10-year truce with the Saracens before he was ransomed.

An interesting man, King Louis by all accords, lived an exemplary life. Of course, you have a real incentive to do that when your mother tells you,

“I love you, my dear son, with all the tenderness a mother is capable of; but I would infinitely rather see you fall down dead at my feet, than that you should ever commit a mortal sin.”

Queen Blanche of Castile must have been a formidable woman. She did not get along with her daughter in law, despite having chosen her to marry King Louis. The animosity between them reached such a level that King Louis took Queen Margaret and their 11 children along on his Second Crusade in 1270 rather than leave them alone with his mother. Blanche of Castile regained the regency in his absence and held it until his heir, her grandson, was crowned. 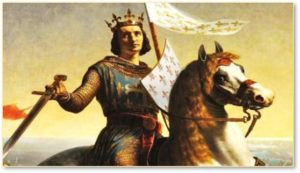 Louis IX’s biographers record that he spent much time in prayer, fasting, and penance, without his subjects knowing of it.

One wonders where he found the time when he was so busy fighting wars, suppressing heretics, building castles, leading two Crusades, founding abbeys, changing the legal system, adjudicating foreign grievances, and raising a chapel that stands as an architectural gem today. We have his hair shirt and scourge so we know that he was devout Catholic and practiced extreme penitence.

On the other hand, those biographers don’t always agree. The Catholic biography claims that,

“Beggars were fed from his table, he ate their leavings, washed their feet, ministered to the wants of the lepers, and daily fed over one hundred poor.”

That would be the image on the painting in our church. Yet the Encyclopaedia Britannica states that, “He was quick-tempered and sometimes violent, and he had to struggle against his gluttony.” They can’t both be true.

By all accounts, however, King Louis was kind man and had a gentle manner. One of his quotes is, “The peace and blessings of the realm come to us through the poor.” His contemporaries considered him the quintessential Christian prince: noble. kind, wise and just. A peacemaker, he ruled over a time that was known as “the golden century of Saint Louis.” 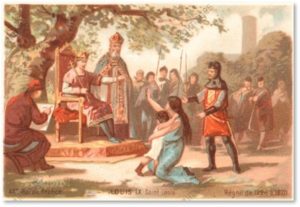 King Louis hears cases under the oak tree in Vincennes

In many ways, King Louis thought and acted ahead of his time and clearly made a difference not just in his kingdom but in England and throughout Europe as well.

Here are just a few of his many accomplishments:

The Illness and Death of King Louis 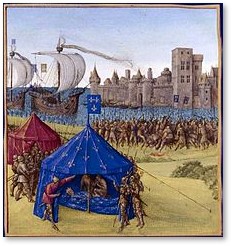 The death of St. Louis de France before the gates of Tunis by Jean Fouquet

Louis suffered through several serious illnesses, largely due to his two Crusades. In addition to the malaria of 1244, he contracted a plague-like illness in Egypt in 1250. Either of those would have been enough to kill a strong man in the 13th century. Yet King Louis died of dysentery – the same disease that took his father – on August 25, 1270, near Tunis on the Eighth Crusade.

A procession carried King Louis’s bones (the flesh had been removed) back to France and many miracles were reported along the way. A royal funeral was held at Notre Dame de Paris. His heart and intestines reside in the Cathedral of Monreale near Palermo, Italy. The bones of St. Louis de France lie among other kings and queens of France at the royal necropolis at the Abby of St. Denis north of Paris. 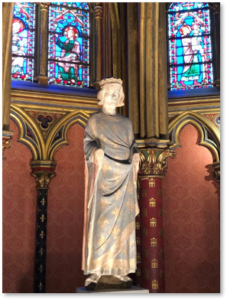 Pope Boniface VIII proclaimed St. Louis’s canonization 27 years after his death. He is the only king of France the Roman Catholic Church numbers among its saints.St. Louis is the patron of builders, kings, large families, and Crusaders. Also, of St. Louis, Missouri.

St. Louis de France is represented in art by the Crown of Thorns, crown, scepter, and the fleur-de-lis (the symbol of French monarchy.

All that history seems pretty straightforward, if impressive. So why does St. Louis de France keep popping up in my life—and where?

I will answer the second question in my next post. The first one remains a mystery.