During the weekend’s trip to New York and New Jersey, we took the opportunity to re-connect with some of the food that we enjoy but that is not available here in New England. On the way down, we stopped at Rein’s Deli in Vernon, CT, for lunch. In the years when we drove back and forth frequently for family events and, later, to take care of my husband’s mother, Rein’s was a favorite place to eat. In those days we chowed down on big corned beef and pastrami sandwiches, foods that we no longer consume because of their sodium nitrite content. Instead, we ordered chicken soup with matzoh balls and open-faced pot roast sandwiches. Both were excellent.

This picture of the deli case at Rein’s stuffed with lox and smoked whitefish reminded me of the first time I went to New York.

I grew up Catholic here in Massachusetts and we ate typical breakfast food in the morning: oatmeal, cereal, pancakes, bacon and eggs, muffins, etc. When I came to the breakfast table I found a platter of bagels and another with different kinds of fish. The gleaming golden skins of the smoked whitefish looked distinctly unappetizing and they stared back at me with dark reproachful eyes. 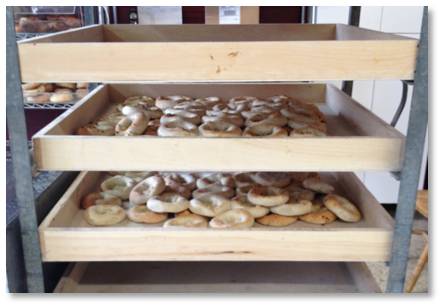 I ddidn’tknow what to make of them or how to begin eating them. (My mother-in-law, on the other hand, had never eaten meat for breakfast and couldn’t imagine doing so.) But the family demonstrated the proper procedure and I learned to enjoy lox and whitefish—although I never developed a taste for either sturgeon or gefulte fish.

On our way back to Massachusetts, we stopped over in New York for a visit to the Metropolitan Museum of Art and the next morning headed down to the Lower East Side. There we visited two of our favorite food vendors.

Kossar’s Bialys is a bakery on Grand Street that has been producing bialys, pletzels (onion bread), bagels and other breads for over 65 years. It’s a small but productive—and wonderfully fragrant—operation. A bialy (short for bialystoker kuchen), is a chewy round roll that is smaller than a bagel but bigger than an English muffin. Unlike a proper bagel, it is not boiled before baking. Instead of a hole in the middle, it has a depression that is filled with a mixture of chopped onions, poppy seeds and sometimes garlic. I slice one up, toast it, put a slice of cheese in the middle and eat it as the cheese melts. Wonderful.

We buy bialys here at the Sudbury Farms supermarket but they are days old by the time they have been packaged and shipped. At Kossar’s we got them fresh out of the oven and still warm. We bought three dozen, planning to give some out to various gluten-eating folks up here who enjoy a good bialy. The rest are in the freezer. BTW: Kossar’s Bialys ships bread anywhere in the U.S. 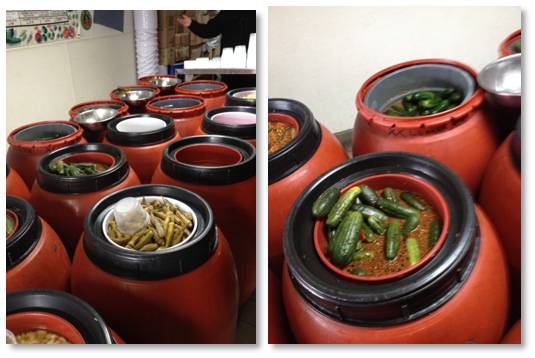 Pickle barrels at The Pickle Guys

Around the corner on Essex Street, we stopped at the even smaller store run by The Pickle Guys. This tiny space is crowded with barrels that are filled with all things pickled. You can, for example, get pickled cucumbers, tomatoes, garlic, cabbage, green beans, okra. and even mango. Essentially, if you can pickle it, they’ve got it.  I bought a quart of half-sour, a quart of full sour and a quart of sauerkraut. They scoop them right out of the barrel and pack the container full.  At one time I thought that full-sour pickles tasted like old gym socks but they are an acquired taste and I learned to love them.

Our car now smelled like a delicatessen. This wonderful aroma would have been even more intense had we added pastrami and corned beef to the cargo but, as I said, we no longer eat any meat cured with sodium nitrite. Although uncured bacon and hot dogs are available at the supermarket, I have never seen these two deli meats without this carcinogenic chemical.

I wanted to make one last stop at Honey & Spice to purchase slabs of their marble cake and lemon cake but, unfortunately, they were no longer in business. The Lower East Side, once a bastion of immigrants from Eastern Europe has become an annex of a rapidly expanding Chinatown and many of the original businesses are gone.

So we headed up the West Side to check out the new buildings and other ways that New York has changed along the Hudson River.  Then we headed on home. Yesterday we brought bialys and pickles up to our daughter, whose eyes gleamed when she saw them.