The idea of a peaceful existence is ancient, reaching back to the beginnings of organized society. Tribes worked towards harmony when they realized the cost that came with conflict. 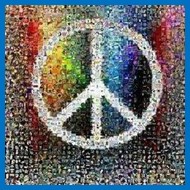 America has lost its way under the current administration when it comes to understanding this most basic tenet of co-existence. The man with the nuclear codes is willing to test this against all odds, failing to understand that in war there is no right or wrong, only what is left.

Peace should never be taken for granted. The price of peace under this president can only be devastation. It will mean the loss of lives, buildings, businesses, jobs, infrastructure respect and hope.

I grew up during the peace movement of the 60s and 70s. I embraced James Baldwin and Eldridge Cleaver and sported the peace icon on my jeans and jackets. At college, we challenged the establishment to address the question of whether one country could force its rule upon another without war or the steep costs of human lives. We Marched for Peace and went to war as Viet Nam became a call of duty.

The 70s peace movement developed in response to the intervention in Vietnam by U.S. troops attempting to stop the growth of national liberation movements and socialism. The American people responded with anti-war protests across the country.

The memories of Hiroshima and Nagasaki were not in our lifetime, but neither were they all that distant. The groundswell of protests against nuclear disarmament and social injustice was widespread on campuses. By 1970, thousands of people representing all races and social classes were actively and, for the most part, peacefully protesting the Vietnam War.

Although the U.S. military presence in Vietnam began during the Truman administration, it ramped up as the threat of communism from a North Vietnamese invasion of South Vietnam increased. First, we sent advisors. The advisors became involved in conflicts. We sent troops in to support the advisors and ultimately drafted 648,500 men to support an undeclared but escalating conflict.

By the time America withdrew after the Paris Peace Accords were signed in 1973 there were 58,202 casualties and 303,704 wounded. The average soldier’s age was 22. It was a high price to pay for an undeclared war and we built a memorial to those casualties so we would never forget what it cost.

The origin of the peace sign I so proudly displayed was not created by my peace-nik college comrades, but designed in 1958 for the British nuclear disarmament movement by Gerald Holtom. The symbol is a combination of the naval semaphore signals for the letters N and D, standing for nuclear disarmament. 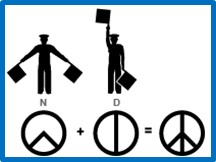 ND is the (peace) symbol shown on the right.  In semaphore, the letter N is formed by a person holding two flags in an upside-down V, and the letter D is formed by holding one flag pointed straight up and the other straight down. By superimposing the flag orientation of these two letters, the bars of the peace sign were created. The circle represents total, and surrounds the N and D signifying total or complete nuclear disarmament.

Bertrand Russell a philosopher, historian, mathematician, and a member of the Direct-Action Committee against Nuclear War was the march organizer responsible for placing the symbol on buttons and banners, and ultimately my jeans.

The Hidden Price of Peace

After World War II, peace rallies in America focused on ending nuclear testing. America signed the limited test ban treaty of 1963 which prohibited nuclear weapons tests “or any other nuclear explosion” in the atmosphere, outer space, and under water.

A lesser-known fact of the treaty was a deal for Republican support in exchange for a promise by then-President Lyndon Johnson to former President Eisenhower to forego an investigation into the tax returns of Eisenhower’s chief of staff, Sherman Adams.

Everything old is new again.

A Prize for Peace

Alfred Nobel, the inventor of dynamite, was devoted to the peace movement, perhaps because his invention was used as weapon of war. In his 1895 will he endowed a peace prize to go annually “to that man or woman who shall have worked most effectively for the fraternization of mankind, the diminution of armies, and the promotion of Peace Congresses.” The Nobel recipient for 2016 was Barack Obama, his prize was 8 million Swedish kronor or about $1.4 million USD. He donated all of it to charity.

According to the Costs of War Project at Brown University, the War on Terror has cost our country nearly five trillion dollars.  That is enough to guarantee every American citizen a basic income. It is also enough to make public college free for every American student for the next 50 years. This is the cost of peace today.

The United States is both the greatest war-making and peace-making force in the world today. Our country has an infrastructure of weapons in the air and on the water, global surveillance, killer drones, and stealth aircraft controlled from 800 military bases in 70 countries. 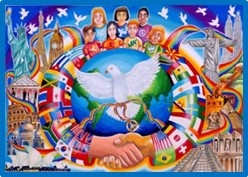 But somewhere along the way we misplaced our sense of accountability, electing a reality TV star as president, allowing him full use of these resources to declare war anytime, anywhere, for any reason.

This man-child is at the helm of global destruction. He has threatened “fire and fury” and promised to “bomb the shit” out of our enemies, attack the families of terrorists, reinstitute torture and ban immigration. This is not the path to peace. Let us restore honor and dignity to the White House before America is forced to once again find the cost of peace.

I live with the hope that change will come and leave you with a musical reflection called Peace, by composer and jazz pianist Horace Silver.  It was written in 1959 and recorded in 2001 by Norah Jones with new lyrics.

Peace is for everyone.