If this topic were simple there wouldn’t be 1,810,000 results on Google when you type in “performance review.”  Most take a simple concept and turn it into a lengthy and painful process that creates performance review skew. There is not one absolute right way, but I believe there one big wrong way.

Organizations use rating models to measure levels of performance. Many still use an obsolete version of the 1-5 scale that reflects a forced distribution of capabilities. But there is no one size fits all, and reducing an employee to a numerical rating once a year should never define performance.

This system labels employees as winners and losers and fails to account for the fact that people have different personalities and unique talents, all of which underwrite the success of a team and a company. It’s generally split into 10% on either end of the spectrum and 80% in the middle.

Shoving people into a bell curve dilutes everyone’s accomplishments and reduces them to a single number. It’s a compulsory ranking system that compares an employee’s performance relative to others, plotted on a distribution curve. It’s not only unfair and demotivating, it labels your largest group of employees “average.” 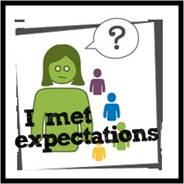 The 1 to 5 annual review is an outdated check-the-box system that is unfair to managers and employees. It cheats both by looking backwards, removing the opportunity for real time conversation and remedial action. In reality, it is a judgment with a verdict; and sometimes a sentence.

Many of the valuable and important things people contribute to the workplace do not fit these boxes. If managers don’t recognize this during the year, they definitely won’t at the end of the year review.

The biggest failing of the numbers system is stereotyping, which creates a flawed appraisal process. These categories are not a true reflection of performance, and the most damning of all ratings is the number 3. It’s a dumping ground; the performance review black hole.

We live in a world where everything is rated—and performance is no exception—but this creates an archaic funnel through which employees are praised and rewarded or criticized and penalized. It is rooted in the industrial age during the rise of unions. Their original purpose dealt with compensation adjustment and had almost nothing to do with performance, yet we still use it.

For Whom the Bell Curve Tolls

There are companies that believe when you give one employee a high rating, you must give another a correspondingly low rating. Using this false logic, an employee’s value is not based on what they have actually done, but measured against what someone else has done. 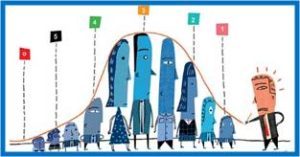 To further this concept, consider a personal friend of mine who gets caught in the meets requirements vortex. Despite an exceptional performance, including awards for specific project deliverables, the manager consistently assigns a 3 rating because “she is not mission critical.”  This company is applying a system that doesn’t apply, and the employee bears the pain of an unfair and statistically flawed rating.

In a 2014 survey conducted by Deloitte, 58% of executives agreed that current performance methods drive neither employee engagement nor high performance. They recommended replacing the “rank and yank” method with one that fosters ongoing coaching and individual growth.

There is no need to take a concept like performance management and make it complicated, awkward and unpleasant. Forcing a manager into the role of judge and jury is counter-productive to training, promoting and retaining talent.

Think Outside the Curve

Reviews are a living process that recognizes and acknowledges performance on multiple levels throughout the year. I have weekly one-on-ones, quarterly goal setting (set them at the beginning, review them at the end) and an annual review. In between I have lunches, team meetings, and most important of all, conversations. Employees engaged at this level rarely fall through the cracks and wait a year to learn how they are performing.

Progressive companies recognize the need for a model that favors on-going communication. Once-a-year evaluations suggest employee contributions are not critical to the success of the company. They restrict dialog to one painful hour a year for a past-tense evaluation that is more often than not a disappointment.

Performance management is tasked with retaining and rewarding employees who deliver at levels that raise a company’s competitive advantage. Unfortunately, the majority of review systems do not uphold this goal because they are one-sided. The best rating models incorporate different styles of leadership and delivery. They are objective, measurable and provide a framework for meaningful dialog throughout the year.

Human organizations call upon people to do their best work every day, empowering them individually and in teams. Employees are encouraged to apply their strengths to clearly defined goals and expectations. Managers see the performance they are tasked with rating; employees are rated on what they actually do, not what someone else did. This promotes real-time feedback rather than evaluating past performance. 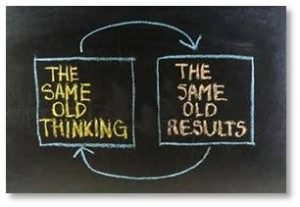 Performance reviews should consider the scope and difficulty of assignments throughout the year and include contributions to the organization above and beyond stated goals.  How has such a critical aspect of employee engagement been devalued and reduced to a set of numbers?

When employees are given regular and actionable performance feedback tied to deliverables and business challenges, they contribute to their own success and that of the company.

Here are six suggestions to create better engagement for performance:

Performance feedback should underwrite an employee’s desire to work hard and deliver their best, not provide HR with a name and a number once a year.