I have been thinking about Susanne’s post yesterday on the difference between how the US Army and US business treat their senior leadership. I flipped it around and considered what the U.S. Army would look like if they treated their new hires in the same way as American business. There would be no senior officers below the level of General.  New hires are like new recruits—they need guidance and direction from older and wiser people around them. But businesses—particularly technology companies—have been offloading their senior people by the tens of thousands. Without this senior leadership to advise, mentor and manage the Millennial generation, three things would be very different.

So here are three lessons for business from the U.S. Army. We’ll look at each of the three through military eyes first, calling this new force without senior leadership the Flat Army. Then we’ll see the impact on businesses.

In the Flat Army, new inductees would be issued gear and weapons but receive no training in anything from how wear the uniform properly to how to use their weapons safely. Many would probably decide not to wear the uniform at all and most would do away with saluting as unnecessary and ridiculous. They probably would be right; after all, there would be no senior officers to salute. Expected to “learn on the job” with no one to teach them how to field-strip a weapon in the dark or fire it accurately, they would present a danger to themselves and others. 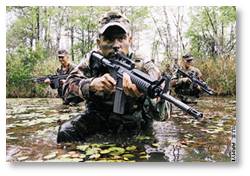 The U.S. Army is very, very good at training people to do a wide variety of things from cracking encryption to flying helicopters. They don’t expect new recruits to come in with that knowledge already embedded. Nor do they whine, as corporations are doing, that training is expensive so someone else should do it for them. (Corporations usually mean that the Federal government should train employees for them—when they’re not complaining about government regulations and interference in their business.) The Army sets up schools and training programs, identifies the most qualified candidates, and teaches them what they need to know to do their jobs well. The young people emerge not only informed, but steady, confident, and mature.Companies, on the other hand, bring new graduates into the work world but don’t train them in what to do. They sit the young people in cubicles in front of computers and tell them to complete a project. The kids have no idea how to do this so they spend time—sometimes a lot of it—watching videos and listening to webinars so as to grasp the concepts and the vocabulary. Then they start the trial-and-error process, learning along the way, until they finally get it done. It all takes time and produces uncertain results in the end. The young employees emerge diffident, insecure, and questioning whether they’re smart enough to do the job.This would be unnecessary if they had older, more experienced managers and co-workers to mentor them. But that leads us to the second difference: 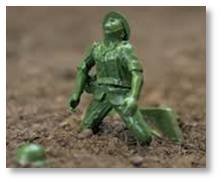 What do I do next?

Soldiers in the Flat Army with no senior officers to provide direction would have no idea of what to do next. Ordered to deploy to the battlefield, they might decide it’s not a good idea to put themselves in the line of fire and retreat to a safer location. Moving forward, they would have no one to point them in the right direction, tell them how proceed or dictate what to do when they reached their goal. Is it an ambush? A flanking attack? A direct assault? Have air strikes been called in? No one would know.

Managers exist in companies for a lot of reasons. It’s true that we go to a lot of meetings, sign off on a lot of paperwork, and deal with a lot of personnel issues from above and below. But one of the biggest things managers do is to provide direction for the people on their teams. We answer a lot of questions, make judgment calls, sort the wheat from the chaff, and focus everyone’s priorities. Go or no-go. Make or buy. What’s our strategy? What message do we use? How do we handle this problem? How do we resolve that issue? Is this program or product worth the investment? How do we justify the expense? How can we help the sales team? How do we prove our effectiveness?  A company without experienced people to answer such questions is much less effective.When companies “flatten the organization” by removing layers of management to save money, they also remove the chain of command that provides guidance, direction, discipline, information, inspiration and motivation to their troops in the cubicles. This might cut expenses immediately but guarantees they will encounter much bigger problems in the long run. Left directionless, the troops will spin their wheels and go in circles, wasting time and money in the process.This might not be so bad if they could turn to older, senior co-workers to point them in the right direction or provide operational context. But those people have been walked out the door as well. That leads us to the third difference:

Lacking an example of how to follow orders—and why—the Flat Army recruits would evaluate each order on its own merit and decide for themselves whether to obey all or part of it. People with Oppositional Defiance wouldn’t obey any order. Soldiers with ADD would do a little bit of a lot of things and finish nothing. There would be a lot of confusion and disagreements. Soldiers would spend time arguing instead of getting things done. Or, lacking a reason to do anything, they would sit in the barracks and play video games. 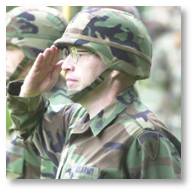 In the Real Army, new Privates and Lieutenants look up to experienced senior officers who provide direction as well as role models and guidance. These men and women are treated with the respect they deserve by all the troops. They have been through the war and survived the battles. They are saluted and addressed with deference.In the business arena, senior leaders are taken into a conference room in which an HR rep waits with a pile of manila folders to process them out of the company. They are given little, if any, severance and tossed out into a world where no company wants to hire anyone over 50. Their experience is denigrated and they are treated with disdain—when they are acknowledged at all.

Abusing and Ignoring the Best Contributors

American business is in the process of abusing and ignoring their most well-trained and experienced employees, their best contributors, because the current management fad is to off load people who are perceived as expensive in terms of salary, health care, and other benefits. In a previous post (Millenials, Maturity and Antelopes) I listed the five reasons companies use to eliminate older workers and why those reasons are short-sighted or incorrect.  Read them and you’ll see what I mean.The elimination of older workers is a short-term solution with disastrous long-term results. Sure, it may pump up the bottom line this quarter or next. But how do you measure the extra time it took Engineering to write the source code, the delay in Product Management getting a new product to market, the decrease in sales because Marketing couldn’t turn out leads, or the employee churn because HR used faulty software to screen candidates?If you can imagine a Flat Army with no training, no discipline, no mentors, and no direction, you can imagine a disaster in the making. Maybe not today or tomorrow, but someday when we need to strike quickly and with precision. That’s what American business is risking right now. They are sacrificing long-term dedication and experience for the sake of short-term profits. Senior employees are taking the hit, especially in the technology industry, but it’s the new recruits who will suffer next. And then, eventually, the impact will be felt on the bottom line.