Skip to primary content
Skip to secondary content
Now that we are moved in, relatively organized, and somewhat healthy, it’s time to compile our insurance claim for all the things the moving company broke. I packed very carefully, using newspaper, bubble wrap and even towels at the bottom of boxes containing delicate things.  I marked those boxes FRAGILE. Yet, when we started to unpack, we began hearing the tinkle of broken glass and china. As we went along, I had to be very careful reaching into boxes because I didn’t know what I was going to find. 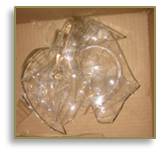 It’s a painful process, made more painful by knowing that none of this would have happened had we been able to use Precision Moving.  They had done work for us before and always did an excellent job.  But they were booked up that weekend so we used Casey Movers instead.  Casey had wonderful references on their site and the guys worked their butts off on a very cold weekend.  They even helped me keep my plants alive.
We thought the move had gone well until we opened those boxes. And there’s at least one I haven’t found yet, with vases and other glassware. It’s here somewhere—I keep looking—but we only have 30 more days to get this insurance claim done.

One by one we put the broken objects into a part of the basement I called the morgue.  Seth took pictures and now I’m compiling a list to go along with them and trying to attach values.For some items, finding those values is easy. Dinnerware, for example. I just go to Replacements.com, search on the company and the pattern, and get what it would cost to order a new piece. Crate & Barrel has their website. But what value do you attach to an heirloom glass wine decanter or cachepot?

Unlike on Antiques Roadshow, these pieces have no maker’s marks or manufacturer’s information—and no provenance—so all we know is they were acquired somewhere in Poland or Russia from sometime in the 19th century. And what premium do you assign for memories?  In most cases, these items came from Seth’s grandparents so the memories aren’t mine, but still.

It raises the issue of whether things are important.  Do you need the things to keep the memories?  As we get older, we move out of the acquisition phase of life and into what the art museums call “de-accessioning.”
That means getting rid of things and I’m all for it. In entering this next phase, I can’t get “broken up” about having fewer things in general but I would have liked to make the decisions on which pieces went, and how.  Now that the “deaccessioning” is done, I just have to let go of the damaged pieces, replace the (very) few things that I used, and focus more on experiences. That was the plan anyway. Maybe the move just helped things along.