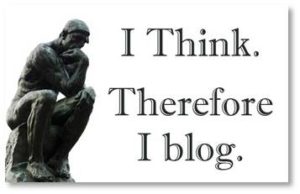 I have been receiving lots of LinkedIn messages congratulating me on my “work anniversary.” (And I thank everyone for taking the time to reach out.) By this, of course, they mean the blogging anniversary of when I started The Next Phase.

While it’s not exactly a job—I have no advertisers and derive no revenue from The next Phase blog—I do work at it and the blog does fulfill that much-promoted goal of doing what you love.

I have always had many opinions, most of them based in facts or research. Over the years, people have often told me they think my opinions have weight and are worth reading. That’s pretty gratifying. I particularly like it when readers comment on my posts, regardless of subject or whether they agree.

I like to think that everyone who comes to The Next Phase Blog does so to read the posts because they find them interesting and informative. Sometimes I get fooled, though.

People who know me won’t be surprised to hear that I track readership regularly and pay attention to which posts get the most traffic. In the beginning, when I was new to blogging and to providing my own IT support, I did a few careless things that opened the blog up to attacks of various kinds. One of those was assuming that my blog was so small and unimportant that it would fly under the radar. On the internet, however, there is no such thing as under the radar.

With the help of my mentor, Jon Rider, and online security mechanisms, I have closed most of those security gaps. This has, unfortunately, resulted in a significant drop in traffic and readership. While the new levels are more realistic and probably more typical of what real readership has been all along, they are still disappointing.

The following chart shows page views over time so you can see the security bubble and what happened when I popped it. But did any of the content I wrote cause problems as well?. Sure thing. 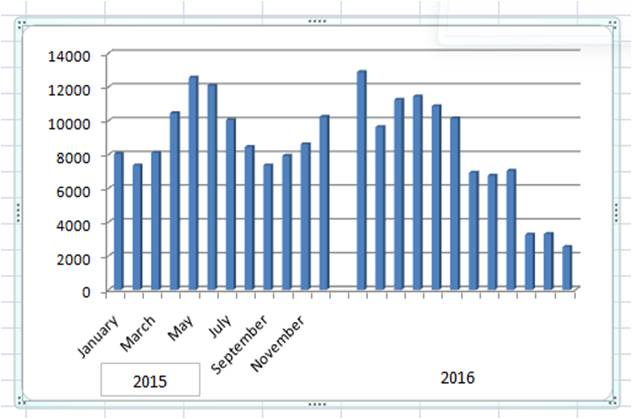 A Glimpse of Stocking and Something Shocking

“In olden days, a glimpse of stocking
Was looked on as something shocking.
But now, God knows,
Anything goes.”

I had no idea what can of worms I was opening up when I wrote a simple post (since deleted) along with a follow-up (since deleted) about how I thought women looked more elegant when they wore pantyhose.

I received comments from a lot of people—men, women, and one trans-woman. Some of the men wore pantyhose for support and warmth in their jobs. Some just liked the way their wives or girlfriends looked while wearing it. These comments seemed innocent enough but I was surprised by the quantity. It seemed unlikely to me that so many people felt moved to let me know how they felt about pantyhose, including their favorite brands.

Gradually, though, some of the comments took on a weird tone and then weird turned into downright explicit. Traffic rose higher and higher. Page views boomed but my post was being read by people who were less interested in fashion than in fetishes. Who knew?

Clearly a lot of people did. You can see from the screen capture below that the original pantyhose post is still one of the most popular I have ever written. I didn’t intend for that to happen and I took the post down this year so it wouldn’t continue. 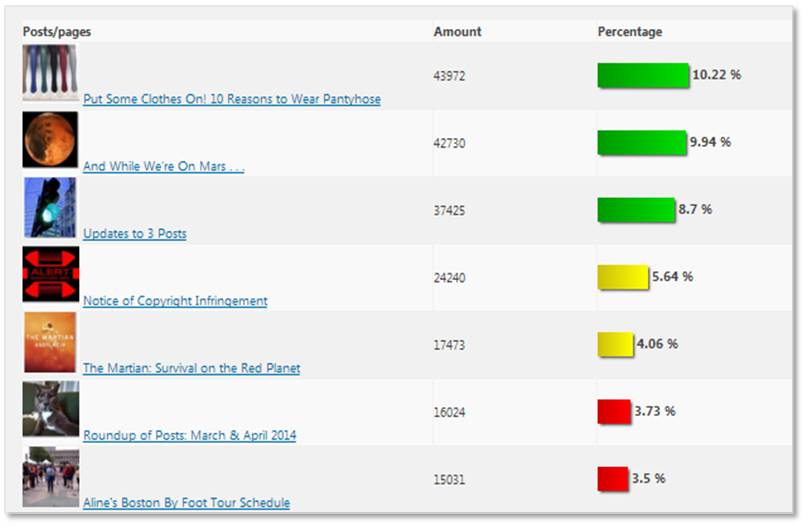 But readership dropped off a cliff.

I boost readership by putting links to my posts up on Facebook, LinkedIn and Twitter. I use Twitter handles when I mention a location that has one. (And I’m continually surprised by the ones that do not.)

I use the Boston By Foot Volunteers Facebook page for my posts about Boston. I link to other sites when I reference them in the post. Still, however, readership keeps dropping. That’s pretty depressing. Maybe it’s because I have a cold and a sinus infection but sometimes I wonder whether it’s worth my time to keep doing this. Is 2,000 page views a month to justify the time and expense?

I still would like readership to grow back up again as long as it’s for the right reasons. So I’m starting 2017 with a request. Please socialize posts that you like, Share them on Facebook, Favorite and re-Tweet on Twitter and Like on LinkedIn. Tag your friends, send them a link. Help me build up more readers.

As long as it’s not about pantyhose. I’m so done with that.