A lot of civilian gear and equipment started as military equipment. Staying away from modern electronic gear for a change, let’s look at three timeless pieces of equipment that were originally created for the armed forces. Surprisingly enough, these items are just as useful as they were decades ago.

The most recognizable example of civilians using autoinjectors is the epinephrine pen, more commonly recognized by its brand name, EpiPen. Automatic epinephrine injectors contain a single, high dose of adrenaline, which can be self-administered by any civilian at risk of anaphylaxis during emergencies. Epinephrine autoinjectors alone save thousands of lives each year but fighting through deadly allergic reactions is not the only use for autoinjectors.

The very first automatic syringes were invented and issued to U.S. military personnel sometime around the 1910s. The medicine inside acted as antidotes to nerve agents even back then. The modern Mark I NAAK is a dual chamber autoinjector that’s still issued to military personnel at risk of being exposed to chemical warfare. 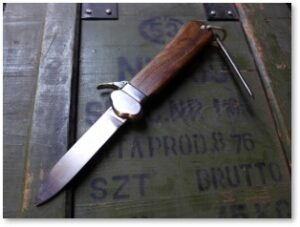 The flieger-kappmesser, later known as the gravity knife, is a German invention from 1937 that was issued exclusively to German Air Force personnel and paratroopers during the Second World War. The German name can be translated into flyer’s cutting knife, which explains the gravity knife’s original function quite clearly. The flieger-kappmesser was not originally designed to be a weapon but a utilitarian tool.

Paratroopers got stuck in trees or entangled in the chute’s lines quite often. Even drowning was common if a paratrooper landed in the water and got trapped by the shroud. All relevant air force personnel in the German army at that time were trained on how to use the handle spike for unhooking knots and cutting the cords with its gravity blade.

Allied air forces also adopted the knife soon after and it became known as the gravity knife. After the Second World War, gravity knives found a much wider range of use among carpenters, electricians, handymen, and a long list of other skilled workers. The newly legalized gravity knife is now just as useful to the military as it is for civilian workers.

Today, the hemostatic bandage is used by the military and civilians alike to stop gravely wounded individuals from bleeding out. Military personnel are a lot more likely to receive life-threatening injuries than the average citizen, especially back in the days of constant war. Therefore, that’s where it all started. It is unclear exactly when the hemostatic dressing was first invented, but the timeline is estimated to be between 1909 and 1910 in the United States.

Last but not the least, an honorable mention must be given to the old Swiss army knife. It’s probably the most comprehensive multi-utilitarian tool ever invented for civilian or military use. Although it’s not as suited to specialized tasks as some of the contemporary military knives, the Swiss army knife is undoubtedly the original jack of all trades.